Rigathi, a close ally of the Deputy President, said the only person who has won hearts in Central is Ruto

• Last Saturday, Kenneth, commonly referred to as PK, led a 500-member delegation of elders and leaders from Central for a meeting with Raila at his Bondo home. It was an ice-breaker between the Kikuyu and Luo.

•  Kenneth has a lot of competition in the race to be Mt Kenya's kingpin. There's still animosity toward Raila and critics say Kenneth himself is an elitist who only shows up toward election time. 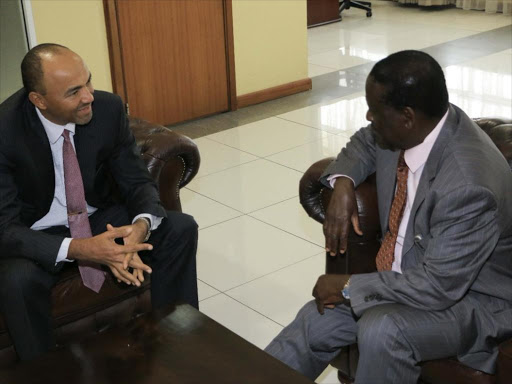 Former Gatanga MP Peter Kenneth is facing a litmus test: Can he unite and persuade Mt Kenya to back ODM leader Raila Odinga for president?

If so, he could become Raila's running mate and possibly Mt Kenya kingpin. There are a lot of 'ifs'.

While the handshake between Raila and President Uhuru Kenyatta sent mixed signal's on Raila's candidature, his party activities and his strategy sessions indicate Raila will be on the ballot.

Last Saturday, Kenneth, commonly referred to as PK, led a 500-member delegation of elders and leaders from Central for a meeting with Raila at his Bondo home.

The meeting was seen as part of breaking the ice between the Agikuyu and Luo,  two communities whose historical animosity dates to post-Independence.

However, Kenneth’s political move has elicited reservations from his competitors who want to succeed President Kenyatta as Mt Kenya kingpin.

Observers say Kenneth will have to wade into murky waters. Other influential regional leaders will try to cut him down to size for daring to become the main man negotiating the community's political direction.

If Kenneth can win them over to back his unity mission, observers say he could then easily give the community political direction.

Scholar and political analyst Prof Macharia Munene said while Kenneth has a right to try his luck wooing Mt Kenya, he will have “to work extra hard to speak to the hearts of the people who have grown up knowing Raila as their enemy”.

Munene also pointed out Kenneth will have to win the hearts of the region's leaders for the residents to believe him.

“He has a right to do all that he wants to do. However, whether that will work or not is a different thing all together. Kenneth has a good profile but not necessarily acceptable across the board,” he told the Star.

He added, “He can win some people but he should know there has never been a time in the history of the Kikuyu where one leader has had total control of the region.”

On October 30, Agikuyu elders are expected to reciprocate by hosting Raila and their counterparts from Nyanza.

The Luos and Agikuyu have been on opposing sides politically save for 2000 when they found themselves together in the same camp as former President Mwai Kibaki and Raila, among others, teamed up to defeat Uhuru Kenyatta who was being fronted by former President Daniel Moi.

In the 2002 campaigns where Raila declared 'Kibaki Tosha', he earned himself a new name among the Akiguyu - Njamba - but fast forward, in the run up-to the 2007 General Eection, the two communities took different directions.

Jubilee vice chairman David Murathe has declared Raila is the preferred successor to Uhuru. He said the region will be using the 2022 presidential election to return the support Raila’s father Jaramogi Oginga extended to Uhuru’s father Mzee Jomo Kenyatta.

Although Kenneth has said the meetings are an initiative of elders, his closeness to Raila, Cotu secretary general Francis Atwoli and Murathe indicates he is being groomed to not succeed Uhuru as Mt Kenya's kingpin but also to be Raila’s runningmate.

“We want to speak in one voice to a meaningful bargain at the negotiating table,” Kenneth who has warmed up to Uhuru said on Ramogi FM on Tuesday.

Since the March 9, 2018, handshake - a truce deal that might have eased the suspicion -  Mt Kenya has remained hostile to Raila. Uhuru, however, has been to Nyanza on several occasions, receiving warm and heroic receptions.

Observers say the President should by now have reciprocated by taking Raila to Mt Kenya.

Ndaragwa MP Jeremiah Kioni, who was part of the delegation that visited Raila in Bondo, said it is time for the two communities to end their historical political intolerance and embrace each other.

He said Kenneth, just like any other leader, has a role to ensure they unite the two communities.

“We want to explain ourselves. We have been misunderstand for many years and it is time we end those suspicions. Mt Kenya too has challenges and we want to see how they are  addressed but we can only do so if we are united and we speak in one voice,” Kioni told the Star.

He said there is wrong perception that the region has been favoured by previous governments.

“Those narratives are biased. We need as a country to talk to each other. We are not talking to our brothers and sisters from Nyanza but we will also be reaching out to other communities,” Kioni said.

However, critics of Kenneth have said he only has a remote chance of rallying the region to support his cause.

They argue that Kenneth is 'too elitist and only shows up toward elections'.

“Peter Kenneth has a democratic right to bring Raila and market in Mt Kenya as many times as he wishes. However, he should be honest with him that Mt Kenya has reservation about his candidate. We only see him during elections,” Mathira MP Rigathi Gachagua said.

Rigathi, a close ally of Deputy President William Ruto, said the only person who has won hearts in the region is Ruto, as “he has shown that he is a good leader with solutions to our problems.

“You do not need to be a magician to tell who has the support of Mt Kenya. Just take a walk to any of the towns in larger Mt Kenya and they will tell you Ruto is their leader,” he said.