Nyoro: Pined for dictator, gets feel of iron fist

In 2017, his alternative to democracy was Kenya to have a benevolent dictator. 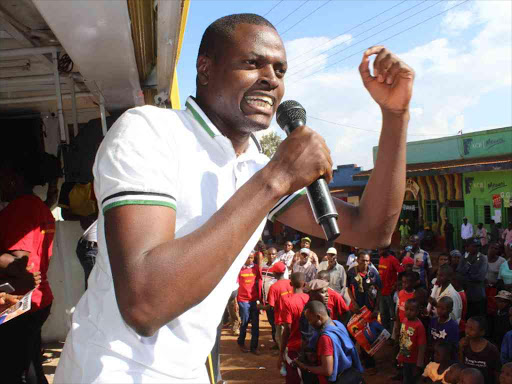 Samson Ndindi Nyoro on August 25, 2017, said we needed to rethink democracy, as it was not serving Kenya well.

Excited about his win as Kiharu MP, Nyoro had hit the jackpot, and thought those on the other side – Raila Odinga and his supporters – were a nuisance in the after-party.

He wrote in an opinion piece for the Daily Nation: “For a start, it is my opinion that democracy is bad. Maybe in the Kenyan setup or Africa as a whole. I actually do not think it is good for the world.

His alternative? A benevolent dictator.

“What our country needs is a benevolent dictator with a clear mission of making Kenya great. He should appoint judges, order hanging of the corrupt and oversee a clean-up of our systems,” he said.

Three years later, does he regret proposing Uhuru be a benevolent dictator?

“I proposed a benevolent dictator, not a petty dictator,” he says.

“A benevolent dictator is selfless and doesn’t mesh private and public interests together. They are for higher ideals. They seek general good, not private good. They pursue interests of the whole, not person aggrandisement.”

Nyoro cites Lee Kuan Yew of Singapore and General Park of South Korea. “They owned no banks, no land and they didn’t take advantage of the people they led through mobile loans. They served and left a legacy. Not money for themselves.”

In October 24, 2017, he posted on social media calls for the President to declare a state of emergency for six months and suspend the Constitution after the Supreme Court nullified Uhuru Kenyatta’s election.

“Within this period, he should rule by the fist, make Judiciary a department of the executive and redeem our country from dark forces by scrapping some useless entities like the Supreme Court,” Nyoro posted on Facebook.

Now, the shoe is on the other foot and Nyoro and supporters of Deputy President William Ruto are falling victim to the very tactics they advocated.

Twice he has faced arrest over violence. The first time was in September 2019, when he clashed with Jubilee nominated MP Maina Kamanda at Gitui Catholic Church in Kiharu, causing chaotic scenes. He is now facing arrest over last Sunday’s chaos at Kenol, where two people died. He, however, denies involvement and blames the police.

Born on the Jamhuri Day of 1985, the Investax Capital economist sat his KCPE exam at Gatareini Primary School in 1999, proceeded to Kiambugi Secondary School until 2003, when he did his KCSE exam. He then joined Kenyatta University to study economics between 2005 and 2009.

Before becoming MP, he served as the Kiharu CDF chairman from 2013 to 2016 under the now Murang’a Senator Irungu Kang’ata. He is also is an entrepreneur with interests in stock brokerage, communication, construction, civil works, water engineering and drilling.

In a report released by Mizani Africa on February 25, Nyoro topped the list in the utilisation of NG-CDF cash in his constituency.

His political ideology is that of capitalism aided by an efficient economy. “Focusing more on creating wealth than not just about how to share it. The current Kenya is grossly unequal because factors of production are in the hands of people who continue to enjoy colonial privilege.”

Nyoro said the scuffle was regrettable and meaningless which demeaned the church.
News
2 years ago

Senator Kangata said MP currently at home and no charges will be preferred against him.
News
2 years ago
by ELIUD KIBII Subeditor and writer
Siasa
12 October 2020 - 18:00