We laughed the solar-car invention out of town calling it ugly. Yet we celebrate instant gratification Band-aid solutions. Who bewitched us?

• The key to reducing unemployment is not to focus on job creation but rather on value creation.

• One way to do this is by catalysing and incentivising the innovation ecosystem. 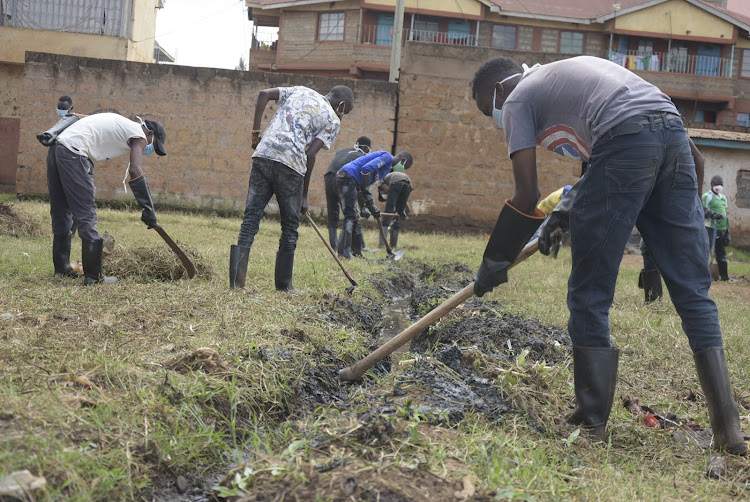 KAZI MTAANI: Youths at work in Kiandutu slums in Thika on Wednesday, May 20, 2020
Image: FILE

“Oh,”the economist responded, “I thought your goal was to build a dam."

One day, Milton Friedman, the American economist who won the 1976 Nobel Memorial Prize in Economic Sciences, was visiting a foreign country.

During his tour, he came upon a large crew of men building a dam with picks and shovels. When he enquired from his host why in this day and age the workers were using such crude equipment for such a gigantic task, his government bureaucrat replied, “You don’t understand. This is a state-sponsored job creation programme."

He then went on to explain to Milton, “You see, if we give these workers modern tools to construct the dam, the task will be completed in a few days, rather than many months, thus destroying many jobs."

To which Milton responded, “Oh,” I thought your goal was to build a dam. If it’s jobs you want, you should give these workers spoons, not shovels. That way the task will take many years to complete, and many more people will get jobs."

Early in the year, the government rolled out a Sh10 billion state-sponsored job creation initiative dubbed the National Hygiene Program aka Kazi Mtaani. One of its main objectives is to provide employment to young people in the informal settlements. In its first phase, the programme recruited young people to collect garbage, clear bushes and access paths, clean and unclog drainages, fumigate and disinfect the informal settlements.

If Milton was to visit Kenya today, he would suggest that instead of slashers to clear the bushes, or shovels to unclog the drainages, the Kazi Mtaani beneficiaries should be given razor blades and spoons to make the jobs last longer, given it is a job creation programme where the beneficiaries are paid a daily wage. So the more days they worked, the more money they would earn.

He has been praised and criticised in equal measure. Those who  criticise him have claimed he is bribing the recipients in return for their votes. Those who praise him say he is empowering the beneficiaries one life at a time.

Begs the question, is there any distinction between the intentions of Kazi Mtaani and the Hustler Nation initiative? And if there isn’t, why is one deemed noble and the other evil?

But I submit we are asking the wrong questions. We are engaging in an erroneous debate. We are being distracted by applying ad hominem reasoning.

Ad hominem is a fallacious argumentative strategy, whereby people avoid a genuine discussion of the topic at hand and instead attack the character of the person associated with the issue, abuse them, profile them and demean them in every possible way, rather than cross-examine the substance of the issue itself.

Hurling insults at the Deputy President or demonising the Kazi Mtaani initiative is an exercise in futility. It is akin to squeezing water. We ought to instead interrogate why we have high rates of unemployment in the country.

The World Bank estimated the unemployment rate at 9.31 per cent in December 2018.

The unemployment rate is the share of the labour force that is jobless.

In economic-speak, it is not everyone without a job who is considered unemployed. Unemployed people are those who are willing, able, available to work and are actively seeking work. Many people who would like to work but cannot, for example, due to a disability or infirmity, or who are incarcerated, or who have become discouraged after looking for work without success, and hence have ceased actively looking for work, are not considered unemployed; and so they do not form part of the unemployment rate.

With this understanding, let us revisit the utility of the two initiatives. Their mission is to create jobs.

The key to reducing unemployment is not to focus on job creation but rather on value creation. One way to do this is by catalysing and incentivising the innovation ecosystem.

Fellow Kenyans, jobs are not created by state programmes or politician’s benevolence, or through party’s manifestoes, or by employment authorities or policies. The problem of unemployment is not the inability to create enough jobs for all, but the creation of value, because jobs are a response to market demand.

The key to reducing unemployment is not to focus on job creation but rather on value creation. One way to do this is by catalysing and incentivising the innovation ecosystem. Innovation is the fundamental source of value creation in any economy.

On one end of the innovation spectrum are research and development and on the other end is product development. In the middle is the graveyard gorge, where several promising innovations die a natural death for lack of resources needed to usher them to the next stage in this spectrum.

Do you recall a youth from Kitale Polytechnic who developed a solar-powered car that had zero per cent pollution and on full charge could travel about 50km per day? This is value creation.

Had the billions of shillings being spent on the Kazi Mtaani or Hustler Nation been invested in product development and refinement of such an initiative, it would have propelled sustainable wealth creation for millions of Kenyans, including future generations.

We could even have become car exporters in the region and beyond. And to crown it all, given that there were zero carbon emissions from this prototype, the country would have been contributing to the Sustainable Development Goal 13 on climate action.

But what did we do instead? We laughed the invention out of town calling it ugly. Yet we celebrate instant gratification Band-aid solutions. Who bewitched us?

So the next time there is a discourse around creating jobs, stop listening. Creating jobs should not be the end game. Jobs will come into existence when there is a conducive and supportive environment to create value. The focus should be on investments where people are incentivised to use their talents, to create value for others and the jobs will naturally follow.

Finally, my unsolicited advice is to the haters and lovers of the two initiatives. Even the smartest person cannot learn if a teacher uses black chalk on a blackboard in a dark room.

Likewise, it is not about Ruto’s or the state’s brilliance and benevolence, or lack of it. It is simply that jobs respond to market demand; and these initiatives cannot stimulate this demand; neither can they predict it in isolation.

The trouble with unemployment is that the minute you wake up in the morning, you're on the job - Slappy White.

Deputy President William Ruto was awarded in Kampala on Saturdaynightfor being part of Jubilee's initiative to give 30 percent of all government ...
News
3 years ago

Critics of Ruto's donations take theirs to wizards - MP

DP Ruto says he will not stop donating to churches 'where there are blessings'.
News
2 years ago
by SUSAN MUGWE Political Economist
Siasa
03 October 2020 - 05:00