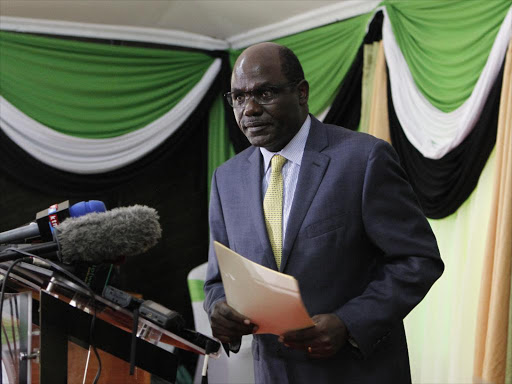 Kenyans are facing yet another crisis as the electoral agency remains unreformed and overhaul efforts are stalled less than two years to the General Election.

After the debacle of the 2017 elections followed by the resignation of four commissioners, there was a general agreement the Independent Electoral and Boundaries Commission needed a total makeover ahead of 2022.

The push for reforms at the electoral agency died soon after President Uhuru Kenyatta and ODM leader Raila Odinga shook hands and entered into a truce and cooperation agreement on March 9, 2018.

In 2017, the country was forced to repeat the presidential poll after the Supreme Court nullified the President's victory, saying the IEBC had failed to conduct the election in line with the Constitution and the law.

The justices flagged illegalities and irregularities in the first round of voting.

Raila refused to participate in the repeat poll, citing lack of transparency and fairness a the same "rotten" IEBC with its “failed” system would still run the election.

The former Prime Minister, who was then flying the Nasa flag, issued a checklist of “irreducible minimum” changes required to ensure the repeat race complied with the Supreme Court ruling.

Raila pushed for transparency in the procurement of voting materials, the providers and management of ICT servers and insisted on the credibility of some senior managers at the commission.

In particular, Raila claimed Form 34C and 34B used to declare Uhuru the winner were not originals but photocopies of “dubious authenticity” and the location of the original forms was never explained.

Raila also held that the commission’s IT system was infiltrated and compromised and the data “therein interfered” with by IEBC officials.

Despite the IEBC repeatedly trying to reassure the country that network coverage was good to facilitate transmission of presidential results, Raila said the technology still failed.

“These blatant illegalities and irregularities were not without motive. It is inconceivable that election body would falsify 80 out of 290 constituency tallies (27.5 per cent) for the sake of it.

"The meaning of the Supreme Court decision is that the so-called numbers claimed by Uhuru Kenyatta are fraudulent. The election was not shambolic. It was rigged for Uhuru Kenyatta.  Uhuru Kenyatta lost the election. It stands to reason that we won it."

With the IEBC having a loaded calendar from January next year running to the 2022 General Election, polls expert Brian Weke on Thursday told the Star, "The country is treading on dangerous grounds and all stakeholders should wake up from slumberland.

“The Johann Kriegler report was clear that reforms should take place immediately after an election and not two years to a general election. Time is dangerously out and the attention of the country should be drawn to the IEBC,” he told the Star on the phone.

Weke said even as the country awaits the recommendations of the Building Bridges Initiative about reforming the electoral agency, Parliament should proceed to quickly enact the necessary legislation.

Any law that is geared for the 2022 General Election ought to be in place two years to the election but we are now focusing on who will be the president and who should not. Nobody is talking about the much-needed reforms at IEBC,” he said.

This could lead to a constitutional crisis as some of the changes or reforms may not be effected due to the time factor.

Weke added, “Before we implement the BBI, we should be rolling out the other reforms that do not need the BBI.  Leaders should see the sense in this and stop burying their heads in sand as this thing [IEBC reform] is so serious."

For almost two years, the IEBC has been operating with only three commissioners out of the maximum seven and it has not  had a substantive CEO.

Currently in office are chairman Wafula Chebukati and commissioners Boya Molu and Abdi Guliye. They were left standing after the resignations of their colleagues Roselyn Akombe, Paul Kurgat, Margaret Mwachanya and Connie Maina.

The IEBC (Amendment) Bill, 2019, which is expected to address the legal lacuna on how to fill vacancies at the electoral agency has for months been tossed between the Senate and the National Assembly.

In September last year, the National Assembly passed the Bill providing the framework for the recruitment of commissioners whenever vacancies occur.

The proposed law provides the mechanism for the formation of a selection panel to recruit the commissioners.

It says vacancies will be advertised, candidates shortlisted, interviews conducted and successful applicants recommended to the President for appointment.

But when the Bill landed in the Senate, the senators introduced amendments proposing the number of panellists be reduced from 11 to seven.

Senators said the panel should be made up of two men and two women nominated by the Parliamentary Service Commission, one person picked by the Law Society of Kenya and two nominated by the Inter-Religious Council of Kenya.

This is a complete departure from the Bill passed in the National Assembly that had proposed an 11-member panel of persons nominated by the Ethics and Anti-Corruption Commission, Public Service Commission, Central Organisation of Trade Unions, Parliamentary Service Commission and the Law Society of Kenya.

The Bill is headed for mediation, a process that will further delay filling the positions at the time the commission is preparing to carry out a review of electoral boundaries and to conduct several by-elections.

The initial BBI report unveiled last year recommended an overhaul of the commission, arguing the current commissioners and the secretariat do not enjoy public confidence.

It also said that all the Returning Officers should be hired on a part-time basis through a system similar to that of hiring commissioners. They should not oversee more than one general election, it said.

The BBI recommended the qualifications for the IEBC chair should be open so it is not the preserve of lawyers. It said the position should be open to anyone with at least 15 years' experience as a senior manager.

The report also proposed the chairperson to be accorded more powers and also function as the Chief Executive Officer.

This is meant to protect his or her work from being undermined by the Secretary, who is the CEO in the current system.

Chebukati and former CEO Ezra Chiloba were involved in protracted power struggle that exposed the deep cracks at the electoral agency.

Chiloba was eventually sacked after being indicted by the commission’s internal audit report. It said taxpayers could have could have lost millions in flawed procurement of goods and services for the 2017 General Election.

In her 'end of assignment' report, former commissioner Akombe exposed what she called the rot at the IEBC. She said senior managers in the Secretariat were tactically delaying procurement processes so time would run out, thus allowing for direct procurement of key electoral infrastructure.

Akombe fled to the US, saying her life was in danger.

She said she was disturbed by the security (or lack thereof) of the IEBC hardware, database and network levels, despite assurances from the ICT bosses.

ICT manager Chris Msando was tortured and murdered days before the election; some people said his killers wanted his password.

Akombe also said the country should consider having two foreign commissioners on the IEBC to mitigate against bias and political interference. She urged that the commission's board meetings should be open to the public and the minutes made public to ensure transparency.

Kaluma banked on the political goodwill between Uhuru and Raila, saying, "The matter can easily be addressed through consensus."

He said while reforms are paramount before 2022, the Covid-19 pandemic "has slowed several processes geared towards 2022".

“We are currently facing a pandemic that threatens humanity. No one anticipated we would find ourselves here and I hope the world will find a medical solution to this pandemic in time as it will bode well for the necessary preparations for the conduct of free and fair elections. Kenyans will find a solution around the situation,” he told the Star.

Seemingly, those who pushed hard for the changes have gone slow on the reforms or are in slumberland after the handshake and as 2022 fast approaches, it might too late to do anything.

As it has been before, the electoral (in)justice problem will recur.

Reforming the electoral agency has always been a thorny issue in every election.
News
3 years ago

They say IEBC remains in crisis almost two years after resignations of its commissioners.
News
3 years ago