WILL THE WINDS CHANGE?

Ruto army crumbles with only few remnants fighting on

Ruto left with an army of less than 15 MPs as allies deserted, changed sides,or went silent for now 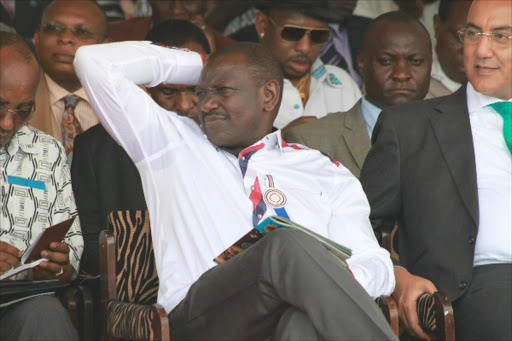 Deputy President William Ruto has been deserted by most of his  political foot soldiers with only a few now having his back.

After romping into power with President Uhuru Kenyatta after the 2017 polls, Ruto built a formidable army of allies across the country in preparation for 2022 polls.

He would use the army to visit constituencies and launch state-funded development projects at the invitation of MPs allied to him.

The DP, said to have a massive financial war chest, also  used to tour for church and other social fundraisers where he would donate millions in cash.

Ruto, traversing the country accompanied with his allies, remained insulated from political attacks as his army formed a buffer — he was there to help MPs and their constituents.

However, the onset of the Covid-19 pandemic — as  pandemics do for world leaders — appeared to have provided Uhuru an opportunity to launch his war against Ruto. After all, his campaign travels and rallies were over for all intents and purposes. Large gatherings are banned.

It would become apparent the President had shoved Ruto out of his succession matrix after a merciless purge and overhaul of the Jubilee leadership.

Uhuru started by taking control of the Jubilee Party by kicking out Ruto’s allies from key organs such as the National Management Committee. The President unveiled a new team.

Even in Parliament where Ruto had always bragged he had the numbers, Uhuru easily managed to kick out his confederates, exposing the DP's underbelly.

For instance, 54 out of 67 senators supported the removal of Kithure Kindiki, one of Ruto's closest confidants, as Deputy Speaker.

Only seven remained standing with the DP and Kindiki. Ruto reportedly told his allies to lie low.

FLYING TOO CLOSE TO THE SUN

“The DP started fighting too early by showing that he is the best. Most of the people who have walked away from his camp have done so because they have realised that the future is dark, if they remain in his side,” former Cabinet minister Franklin Bett said.

The former ally of ex-Prime Minister Raila Odinga told the Star no one can afford to fight the state machinery and succeed.

“That is why we have seen many of his allies deserting him, running to the President and affirming their loyalty to him,” he said.

The MPs who had become the DP’s fiercest defenders throughout his first term and until end of last year have suddenly gone quiet, leaving the general exposed.

Political analysts and observers say the DP is a lonely man walking a tightrope after most of his initially dependable allies chickened out.

Political analyst Felix Odhiambo says Ruto used to dish out cash to buy loyalty from the MPs who have now deserted him because that money can't assure their political future.

“The DP’s army was not solid. It was built on glass and the urge to make quick money. The DP’s grand mistake was to believe in his money,” he said.

Arithmetically, the DP has fewer than 15 MPs spiritedly supporting him outside his Rift Valley backyard, with most of them having taken off fearing the State onslaught

This is based on at least how often they speak up for the DP at a time when he has been relegated to the periphery in his own government.

Initially, they were in their tens speaking in defence of Ruto until the assault was launched in March.

The numbers shrank drastically after among others, Laikipia Woman Representative Catherine Waruguru, dumped the DP for the President’s camp.

Most of the lawmakers from the region who were initially backing Ruto have retreated and are now supporting President’s legacy agenda, including the Building Bridges Initiative.

Others have lost their combative political bravado and gone silent.

Defectors from Ruto’s camp have been trooping to ODM leader Raila Odinga’s Capitol Hill office for a symbolic hand sanitising ritual to allow their return to the President's camp.

Raila, a former foe-turned-friend, is Uhuru’s key political ally with sweeping powers within government, although he holds no formal executive position.

At the Coast, only MPs Mohamed Ali (Nyali) and Aisha Jumwa (Malindi) are Ruto’s visible defenders after others strategically stood down.

In Western Kenya, the DP’s grip is threatened by a huge political war from Uhuru’s camp. MPs Benjamin Washiali (Mumias East) and Didmas Barasa are the only ones clearly on his side.

On Thursday, Washiali, who was purged by Uhuru as the National Assembly Majority Whip, told the Star the majority of Kenyans are with Ruto.

“We are listening to the voices of ordinary Kenyans who are telling us they are with Ruto. Those are the people who have votes, and even if those of us who speak out are only a few,  we are optimistic God will see us through,” Washiali said.

The MP said most of the DP’s loyal supporters have been intimidated and harassed just because they supported Ruto's presidential ambitions.

Washali and former Kakamega Senator Boni Khalwale are leading the DP’s wing of allies from the region to fight off Uhuru’s men.

The President is said to be working closely with Kakamega Governor Wycliffe Oparanya and Devolution Cabinet Secretary Eugene Wamalwa as well as Cotu boss Francis Atwoli to annihilate Ruto's open supporters in the region.

In Nyanza, where the DP enjoyed support among MPs from Kisii and Nyamira counties, only South Mugirango’s Sylvanus Osoro remains in his camp.

Osoro has, however, remained cautious and recently toned down his acerbic attacks.

Ruto, however, enjoys the support of Kisii Deputy Governor Joash Maangi, who is his key pillar across the Gusii region.

In Ukambani, the DP is left with Machakos Town MP Victor Munyaka, as others retreated to avoid falling victim to the State's juggernaut.

“I will work around the clock to traverse Ukambani and the rest of Kenya to ensure that Ruto is the fifth  President of Kenya,” Muthama said on Thursday.

He told the Star he had made up his mind to rally behind the DP because he believes Ruto will win the 2022 General Election.

“We will remain firm and focused to the course. It doesn’t matter how many of us speak up now, many are supporting the Deputy President across the country,” Muthama said.

The former senator is a well-known grassroots mobiliser and has already fallen out with Wiper leader Kalonzo Musyoka, giving Ruto an opportunity to penetrate the region.

Analysts say that like a house or cards, the DP’s army has come tumbling down within six months, leaving the former Eldoret North MP’s national support on shaky ground.

However, the DP’s remnants are bullish, saying they still have massive support among lawmakers whom they argue have taken a strategic retreat fearing State  punishment.

“The voice of the people is the voice of God. Kenyans in the grassroots are telling us to stay put and that is exactly what we are exactly," Barasa said.

He predicted many rivals would be surprised with the level of support Ruto has among Kenyans when the country gets into the official 2022 campaigns.

“Intimidation and harassment is what we are used to,” he said.

The DP’s decimated army has deserted him and the Covid-19 pandemic and ban on movement and large gatherings have provided his enemies the impetus to set up their attacks.

The DP's allies have little options to fight back and manoeuvring room is limited as Ruto has his back to the wall.