POLICE KNEEL ON THEIR NECKS

Statistics show a spike in the number of cases of police abuse of power, especially during Covid-19 curfew enforcement

• Police officers accused of killing Baby Pendo in Kisumu at the height of 2017 elections are yet to be charged.

• Then there is the case of Yassin Moyo, 13, that clearly demonstrates the abuse of power by the police during the ongoing curfew. 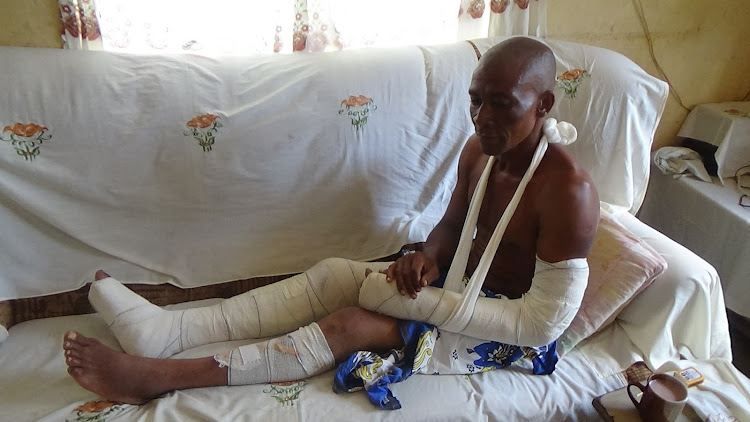 BRUTALITY: Lincoln Nzunza who was allegedly beaten up by police and left with a broken arm and leg at Matinyani police station;
Image: MUSEMBI NZENGU

The world’s attention amid COVID-19 shifted overnight to police brutality with #ICantBreath hashtag trending for days after the horrific killing of George Floyd.

Floyd, a poor man in the US, died after a Minneapolis Police Department officer knelt on his neck for eight minutes and 46 seconds until he died.

As I saw the anger start boiling all over the world, I was instantly reminded of our experiences of police brutality in Kenya.

Floyd’s death is jarring reminder to all of us of the fragility of life of people who are poor, especially the blacks in America. The stark difference between Floyd’s case and ours is how fast the world came to know about his death, and the lighting speed global outrage that followed.

All the four police officers involved in his killings have been arrested and charged for different degrees of murder.

As I write this piece, police officers accused of killing Baby Pendo in Kisumu at the height of 2017 elections are yet to be charged despite a recommendation by an inquest into the killing to the Office of the Director of Public Prosecutions to charge five senior police officers with her murder.

This case, should the DPP pursue it, will be a milestone in accountability for command responsibility in Kenya.

In September 2019, our hearts were broken by the story of Baby Duncan Githinji who was only two years old when police cut his life shot in a slum in Kahawa West. The two police officers who are still serving- were arguing with illegal brewers, who it is alleged had refused to part with protection money.

The media did a good job of covering this story and within days the officers involved were arrested. They were later released without being charged. Before their release, the court was informed that an inquest would be formed to establish circumstances that led to the killing of baby Githinji, but this has not happened to date.

The officers are still serving today. International Justice Mission has since picked up this case to represent the young couple and find justice for Baby Githinji. The 13-year-old Yassin Moyo is a name memorialized to the record of police brutality in the enforcement of covid19 curfew regulation.

Yassin was playing with his sister on his parents’ balcony in Kiamaiko in Mathare on March 30 when he was felled by a police bullet at the safety of his parent’s home.

Independent Policing Oversight Authority (IPOA) has recommended murder charges against a police officer, the DPP has agreed with IPOA, but the officer is yet to be arrested and charged, it will likely take years for Yassin’s family to find justice, at best by when he would have celebrated his 18th birthday Statistics show a spike in the number of cases of police abuse of power in Kenya, especially during COVID-19 curfew enforcement.

Missing Voices has recorded a total of 94 incidences of deaths and enforced disappearances in the hands of police since January 2020 Only in 2 incidents out of the 16 curfew deaths have so far resulted with suspects being recommended for prosecution.

The other cases are still under active investigations according to a report released by the civilian oversight authority on June 6.

Harrowing pictures and videos of police excesses have dominated our news time and social media timelines since the curfew was announced. The brutality has been so bad that none other than the president himself had to apologise twice for excessive use of force and the Interior CS Fred Matiang’ i told a Senate committee that 14 police officers were being probed for violations.

But even with the President’s apology police brutality, especially in poor neighbourhoods continues unabated. The challenge of police accountability in Kenya is systemic – this means that it is premised on a system that encourages the abuse in terms of policy, practices and procedures.

Kenyans always demand instant justice. This is worsened by aspects of our justice system that are broken. For example, people celebrate when a suspect is lynched by a mob because they do not believe that the courts will resolve the case.

Kenyans glorify police killings of suspects because they do not believe in the criminal justice system, killing the suspects to many is instant justice. But crime continues to increase even when police eliminate suspected gangs.

We have to fix our justice systems, to ensure that both the poor and the rich can get the same justice. Documenting the problem of police abuse of power is a nightmare: Human rights monitors face a challenge with data collection.

This is because the police will try as much as possible to dispute the witness account of what happened. We have seen cases of people killed during the curfew hours and police reports have claimed they were killed by thugs or guards.

Cases of police killings take too long to investigate and also take longer in courts. International Justice Mission, an organisation working in the area of police reforms and accountability, had a case of a senior police officer who killed a suspect in the cells and framed a cellmate that took five years.

Even the case of IJM lawyer Willie Kimani, client Josephat Mwenda and driver Joseph Muiruri is still in court four years down the line. Delays in these cases can cause apathy among victims’ families and even witnesses leading to miscarriage of justice.

To quote Benjamin Franklin, “Justice will not be served until those who are unaffected are as outraged as those who are.”

Joseph Kariuki is the Communications Manager at International Justice Mission