• During my visit to Mathare, I not only noticed firsthand how difficult social distancing can be in such an environment but also how much resilient women make a difference for children in the neighboUrhood, whatever the circumstances might be.

•  I also met youths who explained how they started a graffiti campaign on the walls of the community to make people aware of the virus. 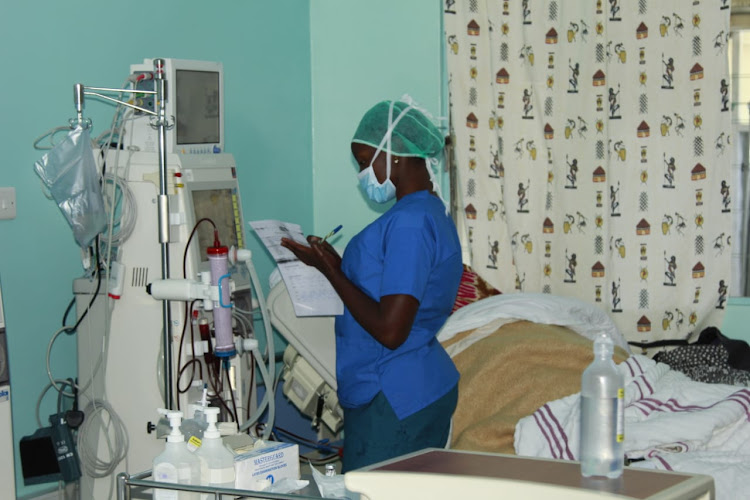 A nurse looks at facilities at the Kapsabet County Referral Hospital which has set aside an isolation ward for Covid-19 patients
Image: MATHEWS NDANYI

As the Belgium ambassador to Kenya, I have lived in Nairobi for almost three years and already started to grow roots here.

I have made Kenyan friends and the skyline of the capital city is now a familiar thing to me, just as the marabouts resting on the billboards, the clock of Parliament, the graphic art displayed by matatus … and their terrible driving habits.

When the Covid-19 struck Kenya in March of this year, I knew the economic consequences would take a toll on the country's population, especially those who already live on the fringe of poverty.

When you live in a city or a community, you have a sense of belonging. So, aside from the funds Belgium channels to this region of Africa through the United Nations organisations such as the Food and Agriculture Organization or Office for the Coordination of Humanitarian Affairs, my wife and I felt that we had to do something in Nairobi. A small gesture to show that we care.

After all, we — the peoples of the world — are all in this and at the same time. After a little brainstorming at the embassy, we decided to use the budget we normally devote to our social events to a good cause, for some families of the informal settlement of Mathare.

With the help of Rachael Mwikali of the Coalition for Grassroots Human Rights Defenders-Kenya and Lillian Awuor Onyango of Kwa-Kariuki Women Group, we managed to prepare 200 food packages for the neediest households in the area.

On May 6, with the authorisation of the Kenyan authorities, I proceeded with the food distribution. With mask and gloves, I first paid a visit to the District Commissioner who explained to me the measures taken on the ground to mitigate the virus contamination. I confirmed to him that we would proceed smoothly to avoid any crowd and hence minimise any risk.

I then visited in person four households and took the time to enquire about their situation and handed to each of them a package which – as advised by the grassroots organisation who arranged my visit – contained salt, sugar, rice, cooking oil, maize flour and soap.

During those visits, I not only noticed firsthand how difficult social distancing can be in such an environment but also how much resilient women make a difference for children in the neighboUrhood, whatever the circumstances might be.

I took the opportunity to make a stop at one of the water and soap stations set by UN-Habitat where a genuinely nice lad gave me a good brief on how to meticulously clean my hands. I ended my morning tour at “Mathare Roots” headquarters, a small office on the corner of the street that houses a significant association.

There, I had a good chat with George Gachie and Lukas Odhiambo, who explained to me how they started a graffiti campaign on the walls of the community to make people aware of the virus. In Mathare, people at the beginning thought Covid-19 was a disease affecting just the wazungus or the lucky ones who board planes.

But thanks to the “murals” that I could spot during my visit, the people of Mathare changed their mind. They are now wearing masks as much as they can.

This was not my first time in an informal settlement in Kenya, but it was again a humbling experience. For us, “the haves”, it remains a necessary “reality-check” to see how destitute some people can be.

But strangely enough, this walk through the narrow and rocky alleys of Mathare, climbing on a steep wooden staircase to reach the dwelling of a family, jumping over a muddy water ditch or zigzagging around the carts under the pounding sun, was also an uplifting experience.

Despite the poverty and the Covid-19 crisis, men and women keep on working, children keep on playing, people keep on hoping. George and Lukas were born and raised in Mathare and through hard work got an education.

They found themselves a job and they could have left the past behind, but they decided to come back. They are here to mentor the kids who they once were and who desperately need some guidance.

Every day, Rachel and Lilian do their best to improve the lives of their fellow citizens and defend the rights of women in a particularly challenging place, in what is and definitely will remain their community.

On that morning, the small gesture of the Embassy of Belgium was rewarded by gentle words of gratitude, smiles of enthusiasm and such positive energy.

But in the end, I was the thankful one.