While border closure is diplomatically used as a hostile action, in this instance, it was for public health good to prevent spread of the coronavirus.

• Kenya and Tanzania are plunged into yet another diplomatic row, this time triggered by different approaches to fight Covid-19 pandemic.

•  The recent dispute was triggered by Kenya’s closure of its border with Tanzania. 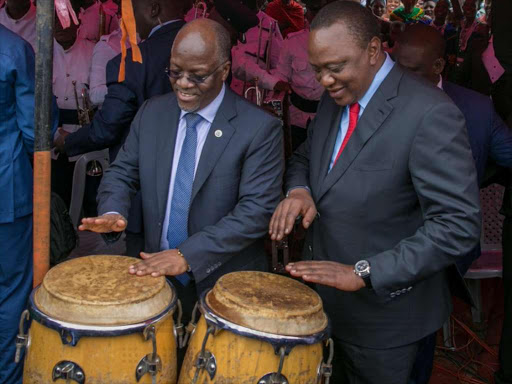 When President Uhuru Kenyatta received four peacocks from Tanzania's John Magufuli, he said the gift signified the love, unity and brotherhood between the people of the two countries.

Notably, the gorgeous fowl were gifted to Uhuru when he visited President Magufuli at his Chato home, which Kenya's High Commissioner to Tanzania Dan Kazungu said this week was the first visit by a foreign leader.

The developments earlier this week did not, however, signify warmth and brotherhood, nor does the content under #KenyaVsTanzania.

Until Uhuru and Magufuli on Wednesday agreed to talk, the two states were involved in a border rift that arose over testing for Covid-19.

The dispute was triggered by President Kenyatta's closure of the Kenya-Tanzania border.

While border closure is used diplomatically as a hostile action, in this instance it was for the public good to prevent the spread of the coronavirus. The President also closed the Kenya-Somalia border.

Kenya's restrictions, however, exempted cargo trucks, which Kazungu said on Tuesday was being ignored in the angry reactions. Drivers must undergo Covid-19 tests and be declared negative before being allowed to cross.

The President said the closure was necessitated by the increase in imported cases of the disease.

Health Cabinet Secretary Mutahi Kagwe said on Tuesday that 182 of 214 coronavirus cases registered at the Kenya-Tanzania border were detected among foreign truckers mainly from Tanzania.

On the other hand, Tanzania says some 19 drivers declared Covid-19 positive by Kenyan health authorities turned out negative when they were re-tested in Dar es Salaam.

EAC Cabinet Secretary Adam Mohamed emphasised that Kenya has not shut its border to cargo during his Covid-19 status address on Tuesday. Kazungu said the same in his address to reporters in Dar es Salaam.

Regardless, Tanzania’s reaction was fast and furious.

Kilimanjaro Regional Commissioner Anna Mghwira and her Tanga counterpart Martine Shigella ordered that Kenyan trucks should not be allowed to cross into Tanzania. Trucks heading through Tanzania to other countries in the south such as Malawi, Zamba and DRC Congo would not be affected.

Adan termed the orders by the administrators as rubbish when he appeared before the Senate Committee on Regional Integration on Tuesday.

“The reality is that the border with Tanzania has been officially closed since corona started. The same way with Uganda. The only thing is that people are getting through the porous borders …the communities are settling on both sides. Other than that we closed movement of people," Adan said.

"Our President was only emphasising what was already in place and was very clear that cargo has not been closed,” he added.

It was not a first as the two countries have previously had problems.

In 2017, Tanzania incinerated 6,400 Kenyan chicks, which were allegedly imported illegally.

In 2018, Tanzania imposed a 25 per cent import duty on Kenyan confectionery.

In the latest case, while it could be termed reciprocity in diplomacy, veteran journalist and former Nation Foreign Affairs editor John Gachie says Tanzania overreacted.

“It is an unfortunate turn of events by Tanzania. Perhaps there were discussions between Kenya and Tanzania before the announcement was made? But it is apparent that Tanzania has adopted a different approach in handling Covid-19,” Gachie said on Wednesday.

He noted that there was an EAC Heads of State and Government meeting on Covid-17 on Tuesday, May 12.

All (those present) agreed to have a closely aligned engagement strategy on Covid-19.

The leaders tasked their agencies responsible for health, transport and EAC affairs to roll out border screening and testing, especially for truck drivers, but not to compromise cross-border movement of goods.

“A unified stand is what we need to combat this pandemic in the region," Uhuru told his colleagues. But Magufuli was missing - for the third time.

Gachie says this points to disagreements prior to coronavirus outbreak.

COALITION OF THE WILLING

He cites the informal Coalition of the Willing (CoW) alignment in the EAC that includes Kenya, Uganda, Rwanda and South Sudan and mainly focuses on their commitment to regional infrastructure development.

This is the reason Tanzania Foreign Affairs Minister Palamagamba Kabudi gave to Parliament for the non-attendance.

Kabudi said they were aware of the meeting but skipped it because it was on the Northern Corridor, in which they have been sidelined in the past.

“Why attend and it is about the Northern Corridor?  We have our Central Corridor and that's why we and Burundi didn't attend,” he told Parliament.

He revisited the CoW that former Tanzania President Jakaya Kikwete bitterly complained about to Parliament in November 2013.

"Do they want to create another community? Are they angry with our country or me, or do they want to push us out?" President Kikwete asked.

Among the issues Tanzania opposed in the CoW were the Single Customs Territory and fast-tracking of the political federation, which Kikwete said isolated Tanzania and Burundi.

Kikwete, however, tried to mend ties in his address to a Joint Sitting of Kenyan Parliament on October 6, 2015.

"I'll leave after my term happy that I have left Kenya and Tanzania relations being at their best in our history. I assure you that even after leaving, this policy will not change. I know my country," he said.

"Labda tupate mtu mpumbavu wa ajabu sana ambaye watu aina hiyo Tanzania ni wachache sana. Atakaye dhania uhusiano baina ya Kenya na Tanzania sio maana, achana nao? Atakacho sababisha ni umaskini tu. (Unless we get a very strange fool and such kind of people are very few in Tanzania. One who will imagine that a relationship between Kenya and Tanzania is not important, so leave it? What they will cause us is only poverty)," Kikwete said.

Douglas Okwatch, the editor of African affairs at China Global TV Network, says the diplomatic intransigence is "very East African and it has a long history".

“Tanzania and Kenya have been particularly hostile to each other. Tanzania straddles EAC and the Southern African Development Community, but on the SADC side, it seems calmer. Zambia closed its border with Tanzania but didn't make a fuss,” Okwatch said.

Gachie explains that Tanzania's close allegiance to SADC is a move seen to counter Kenya as it is the gateway to some southern states such as Zambia and to Burundi and the DRC. He notes that Tanzania feels Kenya has used its big brother status and dominance in the region to take advantage of it and other EAC states.

Okwatch says Uhuru fired the first salvo by implementing, without any consultations 'whatsoever', decisions of a summit Magufuli skipped. "Now Magufuli has hit back. The diplomatic back channels are closed. It's gunboat diplomacy."

He says Tanzania in large measure — and Uganda to some extent — still distrusts Kenya since the collapse of the initial EAC in 1977.

"Kenya 'took off' with much of the assets jointly owned under the collapsed EAC. Tanzania has always harboured bitterness. Mwalimu Julius Nyerere gave us a label 'Ndugu zetu wa Kenya nyang'au'," Okwatch says.

Prof Macharia Munene says the mistrust and bitterness can be traced back to colonial history.

"Tanganyika was colonised by the Germans, while Kenya was under the British through and through. The two colonisers didn't like each other and that might have a bearing," Prof Munene, who teaches History and International Relations at USIU, told the Star on Wednesday.

The late Mwalimu Julius Nyerere thus referred to Kenya as a man- eat-man society, to which then-Attorney General Charles Njonyo retorted, Tanzania was a man-eat-nothing society.

Munene says Tanzania and other EAC states were conditioned to fear Kenya due to its dominance, for instance, in industrialisation.

In the recent dispute, Prof Munene points to another difference in handling the Covid-19 pandemic. Kenya has adopted a scientific approach but Tanzania has opted for the opposite, the Madagascar path (traditional),  and "they cannot now even agree on testing," he says.

KIBII: Tanzania should walk the talk in EAC integration

States are cooperating more through integration. Of course, other than states such as the UK and the US, which are moving into an anti-globalisation ...
Siasa
3 years ago

Transport experts have warned that Tanzania could be playing protectionism for its Mwanza, Musoma and Bukoba Lake facilities.
Business
2 years ago

Tanzania denies the reports, saying no cases of Ebola have been confirmed.
News
2 years ago
by ELIUD KIBII Subeditor and writer
Siasa
23 May 2020 - 05:00