• For reasons beyond my comprehension, some citizens are not satisfied with the fantastic state services that we have been offered.

•  All of the politicians are so intensely committed to serving us citizens, that they are fighting each other. This is also resulting in re-organising political parties. 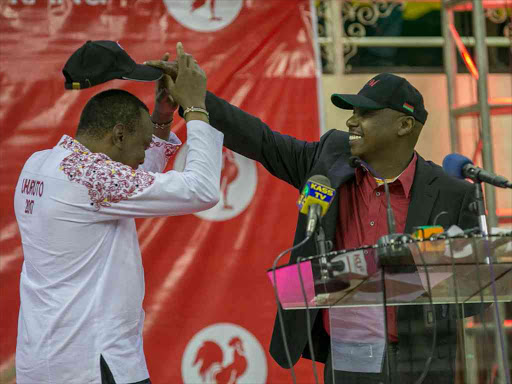 President Uhuru Kenyatta and Kanu leader Senator Gideon Moi after the party endorsed his reelection at a rally at the Moi Sports Centre Kasarani on May 8, 2017
Image: VICTOR IMBOTO

Kenyans have not been well served by their political parties.

Under the Constitution, political parties play the major role in the governance of Kenya. But a party plays this role under the mandate of citizens given in elections. The right to vote is itself regulated in the Constitution (Article 31) to ensure fair representation, including by reference to sex and disabilities. Elections themselves have to be fair — by secret ballot, free from violence, intimidation, or corruption, and transparency conducted by an independent body.

Parties have to observe certain principles to qualify for participation in elections. Each of them must have a “national character” meaning in terms of membership, a democratically elected governing body, promote and uphold national unity, abide by the democratic principles of governance, promote and practice democracy through regular, fair and free elections within the party (my italics), respect the right of all persons to participate in the political process, including minorities and marginalised groups as well as respect and promote human rights and fundamental freedoms, and gender equality and equity, and respect the objects and principles of the Constitution and the rule of law.

Nor should parties engage in or encourage violence by intimidation of their members, supporters, or opponents. They should not engage in bribery or other forms of corruption. They should not use public resources to promote their interests or their candidates in elections.

Now I ask you how far our politicians and their leaders have honoured these requirements. Don’t we all know that they have scrupulously avoided prohibited policies or tactics?

There are other ways too in which our politicians have been scrupulous; have done us proud. Let me show how. Have you ever seen a party that does not have a national character or seen any party which is rooted in a tribe, or that its policies are not directed to promote or uphold national unity; free and fair elections within the party?

Most of all, have you ever seen a political party built on the basis of ethnicity—of course not, never. They are all, to a body, devoted to the nation as a whole. And no one,   as far as I know, has any politician or minister taken so much as Sh10 —certainly not in the form of bribe. Of course not.

Nor is it fair to say that politicians are a class onto themselves. I do not know of any parliamentarian or minister who has not discharged his (or her) responsibilities most scrupulously.

Instead, they have devoted their lives to serve the poor—and have eradicated poverty throughout the land. Completely in accordance with their bible — the Constitution, they have given the highest importance to fulfilling every requirement of the chapter on the Bill of Rights.

But our politicians, perfectionists as they are, are not satisfied with their achievements. Some of them have embarked on super-perfection.

They call it BBI. They have spared no amount of time and money (from the state) to persuade us on how to improve our lives.

TOO MUCH OF A GOOD THING?

For reasons beyond my comprehension, some citizens are not satisfied with the fantastic state services that we have been offered. Some citizens see them as “betrayal”; others as “saviours”.

All of the POLITICIANS are so intensely committed to serving us citizens, that they are fighting each other. This is also resulting in re-organising political parties, OFTEN.

What this will lead to we do not know. What we know is that some of the stalwart politicians are quarreling — to put it mildly.

Most Kenyans cannot comprehend it; others are more cynical. What we know is that it could lead to two blocs—breaking up the excellent sense of being one nation that our politicians have worked so hard to create ever since independence.

So what is it? Let me say it is not tribal-never. We are told it is higher objectives. The noblest of Kenyans are involved.

It is taking many shapes without question but our experts say that we have not reached a conclusion. It is possible that other institutions of the state might be involved.

Indeed, the much-revered Constitution may be torn apart. God help us! Though the conflict between factions has been severe, the parties have tried hard towards a settlement. They are peaceful, consistent, ready to listen to the other side and make concessions—and been comrades for years.

It is true that the have been partners for years. So we are puzzled why resolving the differences has become so problematic.

When they were younger, conflicts might have occurred now and then—and sometimes taken to courts locally and abroad.

Indeed, some of them have been both opposing candidates and charged with serious offences. But the strong ties of friendship have returned.

Now the old differences have been settled, even if other differences may have arisen. But it is unlikely to be differences about money.

One way or another both are so rich and so generous (ask the Church). But let us not dwell on that-- Kenyans have no doubt that the differences would all end amicably.

But for now, the disputes seem serious. National elections are not so far away. But we should not forget, though strange as it might sound, that elections are a principal source of ending conflicts as well as generating them.

Both sides are proposing amendments to the electoral system—in different directions. No doubt with sadness that they will have to abolish the system of elections under present rules-- both opposing leaders have benefited from it.

But let us face the truth—elections managed by politicians as proposed will be more honest than those of bureaucrats so far—often accused of corruption, perhaps at the instructions of candidates.

We know, or dispute, that things have not been so honest—as current politicians know. A cynic could ask why are politicians so worried about bureaucracy—after all they can be manipulated with theats or money.

I know well from my former student, Kivuitu, a person of great integrity, how he was forced into manipulation of results (lights went off, only Kibaki’s team were allowed to stay—lo and behind Kibaki won triumphantly. Kivuitu did not survive long--literally.

As elections are nearing (I suppose for politicians two years is soon enough)—so committed they are to process under the Constitution—even if, or perhaps because of, their proposed amendment to turn the electoral system under their control.

So now, we are told, the Constitution will be abolished, more or less. This might suit Ruto who never liked it (even if he may not have full understood it), except that it is reported that now he likes it.

But Ruto’s stance might not please Raila, who was an ardent supporter, indeed a designer of it. But now he is the designer of many amendments which will change fundamentally the nature of the executive.

But, on the other hand, things change and it is no use hanging on to things that have not worked-- or made not to work, of which there are many examples.

Some people think that this is self-serving—as is the entire BBI project a façade—an expensive façade, to benefit a few politicians.

Certainly looking at what is proposed, it is hard to quarrel with that analysis. But then, some say that we do not realise the hardships of the job. Yes, but that is why the Bomas constitution had shifted the burden of administration to the bureaucracy.

As elections draw near, we cannot but reflect on the burdens on politicians. The great virtue of Kenya politicians is that they are not rigid but respond to the imperatives of the moment.

In one election, a colleague can be a running mate, the next moment they can be competing. This may not be the monopoly of Kenyans, but we have developed it to a high art--see the Star of 13 May by James Mbaka.

For the most part, our politicians will not criticise others for inefficiency or corruption.

Who knows whether he (no she so far) maybe his running mate the following election — but it is best to stick to one’s own virtues, of which they believe there are many.

Quite unexpectedly this year already fierce attacks have been unleashed on Deputy President —for long assumed to be the next President.

One of the joys of engagements in Kenyan elections is precisely this. You should see again the Star article on the subject—a complex story played with two opposing candidates. No price for the answer who: Uhuru and Raila.

Another charm (if that is the right word) is the uncertainty until the last minute.

At different times, Raila and Uhuru have been protégées of that great president (really not so great, Moi).

One should have really known that the preference would be Uhuru for the presidency. After all Uhuru’s father, the great but no so honest Jomo, nurtured Moi—in the expectation that Kikuyu politicians would effectively take over the state. Who says there is no gratitude in Kenya politics?

Where will Gideon Moi fit in, now that his party has joined forces with Uhuru. Not as president (assuming Uhuru cannot have a third term—who knows).

After all, did not Father Moi ensure Uhuru candidacy for the presidency? Did he not put him up as a presidential candidate. But Kikuyu preferred Kibaki (who rose to power under Jomo’s auspices — now fighting his son).

The mysteries of ethnicity are complex—that is why for this and other reasons, the Constitution banned any role of ethnicity in politics. Stupid us!

How can ethnicity be banished in Kenya, limited though that ban is?

Elections will lose much of their excitement, certainly the engagement of voters. What other occasion provokes such excitement, and a chance for a bribe?