• In February, Foreign Affairs CAS Ababu Namwamba was in Belgrade to campaign for Kenya’s UNSC non-permanent seat and to woo potential Serbian investors. Kenya was indeed invoking old ties in the UNSC bid.

• The ambassador says he is working on having direct exports to Serbia and to South-east Europe for coffee, tea, fruits such as avocados, pineapples, pawpaws and passion fruits through direct flights. 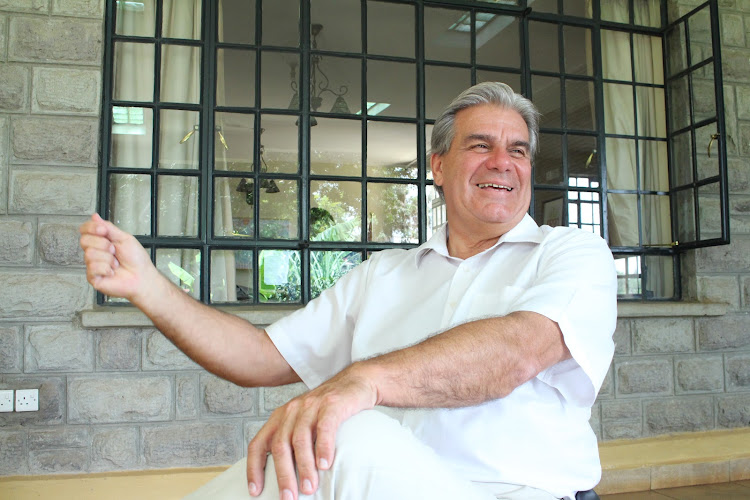 Ambassador of Serbia to Kenya Dragan ZUPANJEVAC during an interview at his office in Runda, Nairobi on February 25, 2020
Image: ANDREW KASUKU

How much do you know about Serbia?

I did a small“survey” in the newsroom and not many know about it.  This is likely to be representative across Kenya.

However, when I asked who Novak Djokovic and Nemanja Matic were, there were positive responses. Djokovic is the number one tennis player, while Matic is a top midfielder playing in England, now playing for Manchester United and formally Chelsea. Both are Serbians.

This is the same question Serbia Ambassador to Kenya Dragan Zupanjevac asked me when I interviewed him last week. And why him?

Earlier, Foreign Affairs CAS Ababu Namwamba sent me a message indicating he was in Belgrade to campaign for Kenya’s UNSC non-permanent seat and to woo potential Serbian investors. Kenya was indeed invoking old ties in the UNSC bid.

This visit followed an exchange of visits between the two countries's speakers of the National Assembly.

In this interview, the country's ambassador explains how deep and historical Kenya-Serbian relations are. For starters, Serbia is one of the six republics that made up the Socialist Federal Republic of Yugoslavia — Bosnia and Herzegovina, Croatia, Macedonia, Montenegro and Slovenia. Serbia had two socialist autonomous provinces —Vojvodina and Kosovo.

As Ambassador Zupanjevac led my cameraman Andrew Kasuku and I to the garden, he said Serbia has been here from the beginning.

“The licence number of my car is CD-8, meaning the eighth country to recognise the Independence of Kenya. I am very proud of that. We have had an embassy here since 1963. We are one of the original countries that have been working with and supporting Kenya for now 57 years,” he says as he takes his seat.

We built the Kiambere Dam, from which Kenya gets a lot of electricity in 1985, and the Nairobi-Thika Water System. Other Yugoslav countries also built roads that are quite well remembered

He notes that as Yugoslavia, they supported the struggle for independence among African countries and worked with them in the Non-Aligned Movement during the Cold War.

“At that time, in the 60s, 70s and 80s, Yugoslavia/ Serbian companies were very much involved in your development. We built the Kiambere Dam, from which Kenya gets a lot of electricity in 1985, and the Nairobi-Thika Water System. Other Yugoslav countries also built roads that are quite well remembered,” he says.

THE BREAK UP OF YUGOSLAVIA

In the 1970s, one of the reparations of the end of the Cold War was the breaking up of Yugoslavia.

The country, the ambassador explains, had multi-party elections in the republics and nationalist forces took over most of them and as a result, Slovenia, Croatia, Bosnia, Macedonia declared independence.

Out of the six, Serbia is the biggest and its population, which made up about 40 per cent of the entire federal republic, now stands at 7 million. Belgrade, which was Yugoslavia’s capital, is still the capital of Serbia.

Zupanjevac says in many ways, Serbia is the continuity of Yugoslavia.

“We are the only republic of Yugoslavia that maintains a very strong presence in Africa with 12 embassies, seven of them in sub-Saharan Africa - Addis Ababa, Nairobi, Pretoria, Lusaka, Kinshasa, Abuja and Rwanda. This shows we respect this long relationship of working and supporting Africa.”

He says this is informed by the support their country received from African states during the break up of Yugoslavia “when the West was criticising Serbia for being too heavy-handed in defending its interests”.

The other set of people who might know about Serbia is likely to be about the Kosovo issue.

In 2008, the autonomous province of Kosovo, which has the majority of the Albanian population, declared independence.

“We think that declaration is illegal because Kosovo is not a republic, not like Croatia or Slovenia. It was just a province of Serbia and did not have the right to declare independence. There is a UN Security Council Resolution 1244 which basically states Kosovo is fighting Serbia and that it should get autonomy and its refugees return but about half the UN member support Kosovo independence,” the Ambassador says.

Kenya is among the group that does not recognise the independence of Kosovo, which Zupanjevac says is very significant and important, because “Kenya respects the rule of law and international order”.

“We respect this so much that we are openly supporting Kenya’s bid to join the Security Council,” Zupanjevac said.

Our historical ties have stood the test of time ...Today, this special friendship is evidenced by the commitment of Serbia confirmed by your excellency [Deputy Prime Minister Ivica Dacic] right now to support Kenya's bid for the UNSC non-permanent seat for the period 2021-2022 in the vote to be held in New York this June

In education,  Zupanjevac said Serbia has a good sponsorship programme and there are many Kenya students on these scholarships.

"I just met two students this year who came back from the University of Belgrade and are now young doctors in Kenya".

In security, the envoy adds that the two states have good military cooperation and have supplied Kenya with military hardware for a long time.

For instance, Kenya’s military in 2014 acquired heavy arms valued at Sh2.6 billion from Serbia according to a 2015 report by the Stockholm International Peace Research Institute. The weapons included 18 self-propelled guns (B-52 NORA 155mm) and 15 armoured personnel carriers (APC).

“Serbian companies are also refurbishing Kenyans radars, which is really good business for both sides,” the envoy said

Serbian companies are also in the tech business and are selling TVs andTesla phones, which are cheap but high quality. Their main shop is near the Sarova Stanley Hotel. Nikola Tesla was a Serbian scientist behind the Tesla cars.

“There are three to four companies but we want more to come. We have invited president of Kenya Chamber of Commerce and Industry Richard Ngatia to visit Serbia. We are importing coffee and flowers from Kenya but statistically, this is not shown because we buy flowers from the Amsterdam market and coffee and tea from Western Europe,” he adds

The ambassador says he is working on having direct exports to Serbia and to South-east Europe for coffee, tea, fruits such as avocados, pineapples, pawpaws and passion fruits through direct flights.

Amb. Dragan Zupanjevac of Serbia held talks with Hon @AbabuNamwamba as a follow up to his recent official visit to Belgrade. They discussed cooperation on matters of trade, planned political consultation in Nairobi and scholarships for Kenyans to study in Serbian institutions pic.twitter.com/qOU2EHwQfi

“We have a very famous institute of maize, which can help in increasing yields in the production of maize, fruits and vegetables as well as wheat,” he noted

The CAS said he also visited the Sports Center of the Football Association of Serbia, which he described as among the most modern facilities in Europe.

“It offers top-level training camps in football, handball, volleyball, basketball and martial arts. I explored the possibility of training camping for Harambee Stars for World cup qualifier preparations,” he said

The ambassador said in the famous marathon in Belgrade, the winners have always been Kenyans.

In April last year, it was Isaac Rutto and Judith Korir who won the 32nd Belgrade Marathon that had over 8,000 participants in the marathon and half-marathon races.

Young Kenyans training in tennis as well as swimming in Serbia. These ties could be more because basketball and volleyball are also famous in Serbia, among the top team in the world.

“One of the best matches I have ever watched is when the Serbian girls beat the Americans in the Olympic volleyball semifinal in 2016 and won the silver medal. Your teams can come to Belgrade to learn and improve the level of your sports,” the ambassador said.

He also announced Kenya will be the main guest at the Museum of Africa arts in Belgrade in June during the Africa Week to showcase music, culture and dance.