• The concept that power should be limited is based on the understanding that governments, if left unchecked, can abuse their powers. 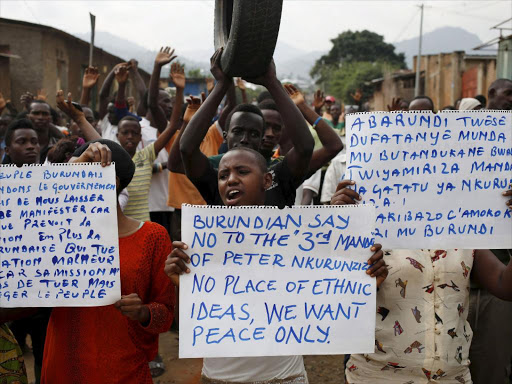 Protesters who are against Burundi President Pierre Nkurunziza and his bid for a third term march in Bujumbura, Burundi, June 4, 2015
Image: REUTERS

In Kenya, particularly during presidents Jomo Kenyatta and Daniel arap Moi’s terms in office, many people believed an incumbent would not lose an election.

And, until 1992, there was no limit to their term. Citizens in many other countries may also easily connect with the belief that the incumbents can’t lose an election, especially because the playing field tends to favour them. Thus, who wins an election would not solely be determined by the electorate. A possibility of a single person holding political office for so long may also raise other issues that are not in line with how the people choose to govern themselves, and are inconsistent with principles of human rights and democracy.

In 2018, Cameroon’s Constitutional Council declared Paul Biya, the winner of the presidential election. At the end of his seventh term, he will have served as president for 43 years. In Equatorial Guinea, President Teodoro Obiang Nguema has been in office for 40 years after winning the sixth election in 2016. His son is the Vice President. Similar examples of leaders staying in power for long can be cited in several other countries. In Gabon, Omar Bongo was President for 42 years until his death in 2009.

There are also cases of leaders from developed countries who have held office for long. In the United Kingdom, for example, the Queen has been on the throne for 69 years. Margaret Thatcher served as British Prime Minister for 11 years. Angela Merkel, the Chancellor of Germany — the head of Government — is serving her fourth term in office. In the US, only President Franklin Roosevelt served for more than two terms, which was 12 years. Roosevelt won four presidential elections.

However, many of these countries have been removing the term limits. Burundi extended theirs from two terms of five years each to two of seven years each. The extension could allow the current president another two terms until 2034. Rwanda has done something similar. Gabon and Cameroon removed their limits.

In Uganda, a court in 2019 declared invalid a constitutional amendment — which had reintroduced term limits following their abolition (by referendum) in 2005. This was because of the defective procedure use in enacting the amendment.

In Kenya, Article 142(b) of the Constitution provides: “A person shall not hold office as President for more than two terms.”

Article 180 (7) has a similar rule for a governor and deputy. The Punguza Mzigo popular initiative proposed a single seven-year presidential term, but the Building Bridges Initiative proposes retaining the current two five-year terms. But some suggest that proposals for a prime minister may give a chance for office after expiry of presidential term limits. Term limits are, therefore, still a topic of discussion in Kenya.

There is something different about the non-African examples given earlier.

In the UK, the Queen holds a ceremonial position that should not interfere with the will of the people in day-to-day government decision making. She reigns but does not rule.

The German Chancellor and the UK Prime Minister are elected in parliamentary systems where it is easier to remove them from office than to remove presidents in presidential systems. In parliamentary systems, elections may be held early (parliaments often do not have entirely fixed terms). Prime ministers may serve several short periods in office, and a rigid end to their tenure might come in the middle of a parliamentary term. Very few countries have tried term limits for them. But in Israel, some are now demanding them to avoid the sense that a particular person is indispensable.

Ironically, most parliamentary systems do have limits for the formal head of state (unless they are monarchs). This is true of India, Pakistan, Bangladesh, Germany, Malaysia – and Israel, among others. In France, where the President and Prime Minister both have governmental powers, the former alone has a term limit.

Where the President is the head of government and state, and is elected directly by the people, he/she is shielded from losing office because that mandate comes directly from the people. If the legislature, for example, successfully impeaches him, the person can still contest and win the presidency again.

The concept that power should be limited is based on the understanding that governments, if left unchecked, can abuse their powers. Constitutions and laws exist precisely for that purpose: To control what the government can do and how it is established. Other controls such as the internal government checks and balances are designed for government to check itself.

Having laws limiting power through term limits is an important step towards creating a level playing field during campaigns and elections — a key boost to democracy. The power of the incumbency usually plays out during elections, thus, there is a likelihood of new candidates being disadvantaged or/and discouraged from seeking elective positions. Giving only two terms gives an opportunity for new leaders to emerge, some of whom may even be better leaders.

Term limits increase the likelihood of more citizens getting to political leadership positions. This recognises that government belongs to the people and respects the people’s stake in it, and their ability to lead.

Term limits encourage accountability. This is because in a presidential system, presidents are insulated from easy removal from office, hence can potentially monopolise the position if there are no presidential term limits. That possibility would encourage dictatorship which in turn would lead to less, or no, accountability.

Removing existing term limits erodes the principles of constitutionalism with the likely effect of eroding confidence in the system and opening the doors to disregard of the rule of law. It could, for example, encourage citizens to use unconstitutional means since they see even those in leadership positions not respecting the established rules of the game.

“The abrogation of term limits undermines accountability, increases the concentration of power in the hands of one or a few individuals and shrinks political space, ultimately leading to rising risks of political tensions, violence and civil strife.” These words are from the Niamey Declaration of 2019.

The declaration is recommended as an advocacy tool to empower African people to hold their leaders accountable and have them fully embrace the constitutional term limits. The declaration can be signed at: https://termlimits.ndi.org/declaration.

CHANCE FOR CITIZENS TO FORM GOVERNMENT

In a presidential system of government, the incumbency of holders of the Office of the President, and sometimes heads of subnational governments, can give them an advantage over other candidates.

To secure the system of government of the people, by the people, and for the people, there is need to ensure term limits are respected where they are already in place, and are set where they don’t already exist.