AGL is co-owned by Centum Investment Company and three other companies (US and Danish).

• Akiira Geothermal Ltd claims these destitute people are ‘squatters’ who have only recently moved onto the land in hopes of compensation, a charge they deny. 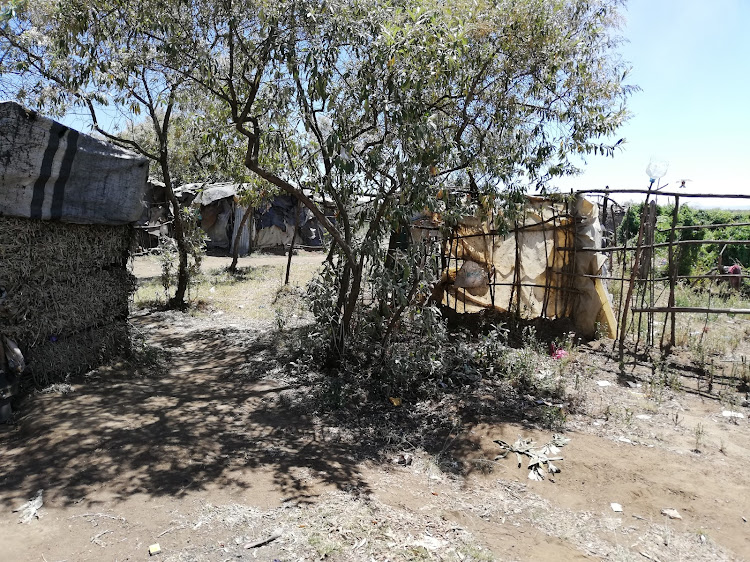 Lorropil is a miserable looking place, its ramshackle huts just wattle and daub covered in plastic and sacking
Image: BankWatch

The European Investment Bank seems to have just bowed to human rights lobbyists and cancelled a Sh19.5 billion (€155m) loan it was considering making to the geothermal company Akiira Geothermal Ltd.

The allegations were about AGL’s repeated threats to evict the residents of a tiny village, Lorropil, that lies on its land (Akiira Ranch).

AGL does not deny having ordered these ‘encroachers’ to go voluntarily, or face eviction. The most recent threats were made on Monday, October 28, when the villagers were given a deadline of tomorrow (Sunday) to vacate.

Known as Kambi Turkana to its largely Maasai neighbours, Lorropil has 47 residents, including Turkana, Samburu, Kikuyu, Il Chamus, Kisii and Kalenjin. AGL claims these destitute people are ‘squatters’ who have only recently moved onto the land in hopes of compensation, a charge they deny.

AGL is co-owned by Centum Investment Company and three other companies (US and Danish). It plans to build a 70MW geothermal plant on land that was formerly part of the 75,000-acre Kedong Ranch in Nakuru county.

The loss of EIB funding is a huge blow to AGL, which was reportedly expecting lenders to provide 70 per cent of the project’s total cost of Sh39b. However, AGL denies knowing that ‘any funding has been withdrawn’. But a few days earlier, the EIB was reported as having confirmed the decision. It has subsequently said it was misquoted, and never spoke to the reporter concerned.

Whether or not the people are squatters is irrelevant, forced eviction, without proper consultation, resettlement and compensation, would breach the EIB’s Environmental and Social Standards, which protect squatters and those without land titles.

It would also breach World Bank policies on involuntary resettlement and indigenous peoples, which AGL refers to in its own 2012 social and environmental assessment of the project.

It would also breach the Constitution’s Bill of Rights. Article 19 (2) protects human rights and fundamental freedoms to preserve people’s dignity. Article 43 protects various rights including that to housing.

An EIB spokesperson told the lobbyists, who include the NGOs Bankwatch Network, the International Accountability Project, and one of these authors, ‘The EIB has taken all the allegations extremely seriously and will make every effort to ensure that EIB’s environmental and social standards are respected throughout all of its projects’.

The spokesperson, Juan Manuel Sterlin Balenciaga, Deputy Head of EIB’s Civil Society Division, also told lobbyists that ‘the EIB has informed the Akiira project sponsors that should any unlawful evictions take place, the project would become ineligible for financing’. 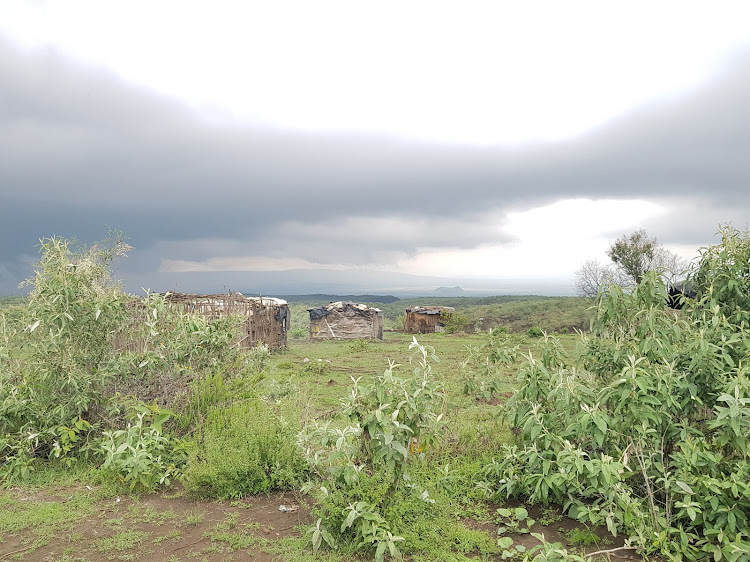 SO WHO IS AGL TRYING TO EVICT?

Though the company claims these villagers only arrived ‘recently’, and allege ‘this is an illegal settlement developed in 2016’, the villagers say they have lived here or hereabouts since 2004, much longer than the newly arrived AGL, which was only founded in 2014.

Some of them previously worked for Kedong Ranch, which collapsed in 1994, and say their forefathers laboured there for decades and on European settler farms at Kedong. Like many Maasai, these former farmworkers and their families have ‘squatted’ on Kedong for generations. But they don’t have a title, or any papers to prove residency.

However, in a recent landmark settlement, the Maasai, who have long lived on Kedong Ranch without a title, successfully argued ‘adverse possession’ and 2,500 families won back 4,000 acres (e.g. https://www.the-star.co.ke/news/2019-07-08-maasais-to-get-4000-acres-in-kedong-after-deal/).

A successful claim of adverse possession requires proving that one has occupied land for over 12 years, openly, without using force, and without having the permission of the owner to be there.

Lorropil is a miserable looking place, its ramshackle huts just wattle and daub covered in plastic and sacking. These ‘houses’ had to be rebuilt earlier this year after arson destroyed the whole village. People own no livestock apart from a few chickens, and scrape a living largely through charcoal burning, though county officials recently told them to stop. Lorropil lies just outside the perimeter fence of RAPland, a village built by the geothermal company, KenGen, for the Maasai involuntarily moved in 2014 from their previous homes to make way for geothermal plants. (RAP stands for Resettlement Action Plan.)

KenGen bought this 1700-acre plot from the owners of Kedong Ranch. The EIB also co-funded KenGen’s Olkaria IV and earlier plants; the construction of Olkaria IV ‘necessitated’ the resettlement of Maasai in RAPland. That resettlement is itself mired in problems and myriad complaints from those who were moved. The EIB and World Bank have publicly admitted many failings associated with the relocation.

One 43-year-old Turkana man at Lorropil told visiting researchers, ‘We are living like animals in a zoo because the government is not taking care of us …We don’t feel that we are Kenyans.’ Their despair and poverty is visibly etched on life-worn faces.

The villagers felt so marginalised and forgotten by the state that they decided to set up their own ‘kingdom’ to rule themselves, complete with a king and president (Lepariyo, he’s also the chief). The majority don’t have identity cards. They are simply not on the official radar – until now.

AGL has claimed, in correspondence with lobbyists, to have ‘taken an active role in engaging the affected communities’. However, its webpage, Community Engagement, is blank and they can provide few details of such engagement. The ‘community’ consulted appears, from names and other information in its 2012 environmental and social impact assessment (ESIA), to consist largely of the Kikuyu and the Maasai living in or near townships/trading centres some distance away.

There were only two formal meetings with ‘stakeholders’, and these do not appear to have included any Turkana or anyone living on Akiira Ranch. The second largely involved elite people, judging from their job titles. This sort of inadequate response to the constitutional insistence on ‘participation’ is all too common.

The villagers say they are just seeking a peaceful life, and have nowhere else to go. Said one woman: ‘This is our only home.’ AGL rejects this claim, calling them ‘fraudsters’.

The ESIA, carried out for AGL by consultants, states: ‘No major movement of population is expected within the project area. However in case there will be any planned resettlement and spontaneous migration of population to the project area, a Resettlement Action plan (RAP) shall be put in place … The process will be consultative and participatory involving all stakeholders’ (p.85, our emphasis).

No such plan was ever mentioned to the villagers, they say. AGL marks the village as a ‘Temporary Turkana Area’ on satellite imaging it has shared with lobbyists, which does not show any ‘houses’ or other structures before 2016. In other words, Lorropil has been airbrushed out. AGL even denies knowing of any such village, only one of the same name in Narok county.

What sets the Lorropil villagers apart from the resettled the Maasai (officially known as PAPs, or project-affected persons) is that their human rights don’t appear to have been officially recognised at all in the complex negotiations and processes around geothermal development at Ol Karia, which have involved the World Bank, EIB and other international funders.

The EIB has now told Hughes that it will re-assess them in relation to the KenGen plants it has funded, and that it is ‘keen to learn and understand’ how they could have been overlooked in earlier assessments of PAPs. It rejects the accusation that it does not care about them.

The villagers thank the EIB for its decision: ‘They have been shielding us with their international standards.’ But the crucial issue of land insecurity remains.

‘We have been forgotten, we are like slaves. The most important thing is how we can demand our land,’ says Lepariyio.

But can the EIB, in the end, protect Lorropil from obliteration? While it is clear that the Constitution clearly envisaged equal respect for all, and protection of even the most marginalised, it is not easy for the marginalised to invoke its protection.

Lotte Hughes is a historian and independent scholar, a consultant on this research project: https://seeingconflict.org/.