Burundi's 2020 election coming up amidst fears of political violence

Not many believe Nkurunziza when he says he won’t run. 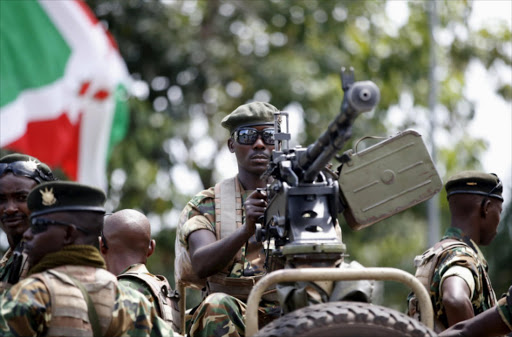 A soldier, who is escorting Burundi's President Pierre Nkurunziza, mans a weapon in Bujumbura, Burundi, May 17, 2015.
Image: REUTERS

The people of Burundi will go to the ballot in May 2020 to elect a new leader when President Pierre Nkurunziza's term officially comes to an end. That's if the President keeps his word not to vie again in spite of a referendum in 2018 that changed the constitutional age limit. Many saw this as part of Nkurunziza's manoeuvres to stay in office as he considers himself to be still young, at only 54.

His repeated comments that he will not run in the upcoming elections have led to two strong factions emerging in his ruling party dividing the country right down the middle. Burundi’s leaders maintain that the country is stable and the streets of the capital, Bujumbura, are bustling with activity. But behind that façade, some residents say they are living in dread.

The young politicians in the ruling party Silas Ntigurigwa and Alain-Guillaume Bunyoni, both of them generals in the military, are said to have huge sums of money and are going around the country campaigning with no clear signs of who will win and how the losers will react. These politicians are highly opinionated, cannot be told off and have reinforced hardline positions amongst voters.

Political pundits however say the ruling party has already started campaigning for Nkurunziza and the divisions portrayed by the young politicians are designed to create a reason for the President to continue in power until 2034.

The political divide, as in many other African countries, has unfortunately taken ethnic and tribal fault-lines dividing Burundians amongst the Hutu and Tutsi and Twa. The locals say they may be brothers but at the same time they are rivals. Big rivals indeed when it comes to political power and ethnicities. The results are that two centres of power cannot be in one house, same party, leave alone same nation.

The main issue that has come up is that the ruling party stands a big chance of extending the current leadership but the sticking issue is how those in power will handle the transition. This was complicated when the vote to decide whether Nkurunziza could continue in office returned a 'Yes' in 2018.

Not many believe Nkurunziza when he says he won’t run in the election because he has vested interest in the presidency. Critics accused the government of intimidating people into voting 'yes' and harassing those returning to the country for allegedly supporting the opposition parties.

The feeling on the ground is that Nkurunziza's government has not done anything significant to open up the political space and many fear that the 2020 election will take place in a climate of political intimidation and violence, not just between the ruling party and the opposition but within the ruling party along the key political figures.

Across the country, supporters of the ruling party and the opposition parties view each other with hostility. Tensions are running particularly high in the provinces of Ngozi, Muyinga and Kirundo in northern Burundi, and Makamba in the south.

The political divide, as in many other African countries, has unfortunately taken ethnic and tribal fault-lines dividing Burundians amongst the Hutu and Tutsi and Twa. The locals say they may be brothers but at the same time they are rivals. Big rivals indeed when it comes to political power and ethnicities. The results are that two centres of power cannot be in one house, same party, leave alone same nation.

“While you cannot touch my brother when I am here as we will obviously gang up against you the enemy, when it comes to power, position and influence, the rivalry between brothers somehow plays out much strongly here in Burundi than you can imagine,” observes one of the church leaders in Matana.

One of the pastors in the capital Bujumbura is now saving to be able to evacuate his family for a while because of the uncertainties over the upcoming elections.

The church in Burundi has started developing peace champions in the communities to deal with the divisive issues emerging amongst the people. It has come up with a peace declaration that all those seeking elective positions have to sign ahead of the election. Even the members of the community will have to sign the peace declaration which is binding to ensure peace before, during and after the election.

While Foreign Affairs minister Ezechiel Nibigira declared at the UN Assembly on the last day of September that there is an increasingly favourable climate for free, transparent and calm election, evidence on the ground is contrary and the world should keep an eye on the current regime to ensure it upholds human rights and conducts a free and fair election on May 20, 2020.

THE crisis in Burundi escalated for a second day on Thursday, as President Pierre Nkurunziza continued to seek refugee in Tanzania with chaos ...
News
7 years ago
by John Harrington Ndeta
Siasa
13 October 2019 - 05:00