Conflict with Somalia should not be taken at face value because it has deep underlying historical socio-cultural issues that needs to be carefully addressed.

• Photos sessions and handshake between presidents would be good for the eyes but a clear understanding of historical issues that were left unaddressed by our forefathers would be key towards an amicable solution.

• In the face of increasingly unpredictable neighbours, it should be clear to our political leaders that Kenya’s territorial and sovereignty is non-negotiable. 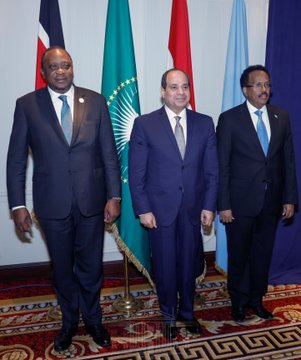 The latest move by Kenya’s President Uhuru Kenyatta and his Somali counterpart Mohamed Farmaajo to normalize relation is encouraging.

The meeting brokered by Egyptian President Fattah al Sisi on the sidelines of the UN General Assembly in New York will possibly see some level of diplomatic engagements reconsidered with crucial aspects of trade and cooperation on security restored.

There is no doubt that Kenya is a strong country economically and militarily. But throughout history, she has always pursued peaceful means towards resolving conflicts with her neighbours.

But it is not without a cost. While the non-intervention policy has played out well in making her one of Africa’s largest economies, her neighbours who have fought bitter wars in the past, have continued to view her as weak and largely inexperienced in combat.

He was probably comparing it to Uganda People Defence Force that has fought with Tanzania, Rwanda and has faced active combat in Sudan, DR Congo and Somalia.

Perhaps this attitude towards Kenya has fuelled his confidence in staying put at Migingo, while Kenya is playing the weak brother. There is no doubt that this perception of Kenya has also encouraged Somalia to reconsider her maritime boundaries.

In the face of increasingly unpredictable neighbours, it should be clear to our political leaders that Kenya’s territorial and sovereignty is non-negotiable.

Conflict with Somalia should not be taken at face value because it has deep underlying historical socio-cultural issues that needs to be carefully addressed.

Photos sessions and handshake between presidents would be good for the eyes but a clear understanding of historical issues that were left unaddressed by our forefathers would be key towards an amicable solution.

Kenya-Somalia border row did not start yesterday. Somalia has always felt that Kenya was unfairly given part of its territory by the British colonialists.

Historical books point to a discontent and bitter Somalia who felt betrayed by Britain who granted the administration of North Eastern Province (formerly Northern Frontier District) to Kenya despite her protests. This resulted to the country severing diplomatic relations with the United Kingdom on March 18, 1963.

Uhuru said Kenya remains committed to its pursuit of peace and stability in the region.
News
2 years ago

Her opposition comes from a reasoning that the area is exclusively inhabited by ethnic Somalis with whom they share the same cultural and social commonalities.

A subsequent armed uprising by Northeastern residents after 1963 to rejoin Somalia was violently suppressed by Kenya in what came to be known as Shifta war.

Peace talks between founding father Jomo Kenyatta and the then Somali Prime Minister Mohamed Egal in 1967 in Arusha perhaps bandaged the wounds but never treated them.

This would perhaps explain why Siad Barre the next Somali ruler abolished the Memorandum of Understanding that was signed in the aftermath of the mediation claiming it was unfair.

It should be remembered that in bid to reunite the Somali speaking people in the region, Somali was also involved in bitter war with Ethiopia but the collapse of her government in 1991 left her bitter and defeated to date.

This quashed her dreams of uniting all Somali speaking ethnic groups spread across Kenya, Djibouti and Ethiopia in ‘Greater Somalia’ concept it vigorously pursued.

Kenya has been pushing for a diplomatic solution but Somalia maintains that the ICJ case should proceed to full hearing.
News
2 years ago

While the Somali and al Shabaab might be politically and religiously at odds, their cultural believes are common. This explains why the group recently joined the same government it is fighting in condemning Kenya’s claim on the portion.

While efforts are being made by the two countries to resolve the dispute, it is heartbreaking that Kenya continues to play a weak brother in yet another territorial dispute involving its territory.

Her reluctance and unpreparedness to argue out her case at the International Court of Justice has badly exposed her leadership’s gamble with her sovereignty.

And if the political institutions continue to pursue the out of court order with a rival that is not willing to, then it should be ready for painful consequences.

(Dancan Bwire, Studying Masters of Arts in International Studies at University of Nairobi)