Lieutenant General Daniel Opande: In Pursuit of Peace in Africa: An Autobiography

The main objective is to inform about the author’s experiences and worldview and the review hopes to guide and ignite intellectual debate on the subject matter.

• The book has 16 chapters and 238 pages, extremely well executed, written with great originality and a wide range of factual evidence and images.

• The standalone chapters give an excellent opportunity for academic research. 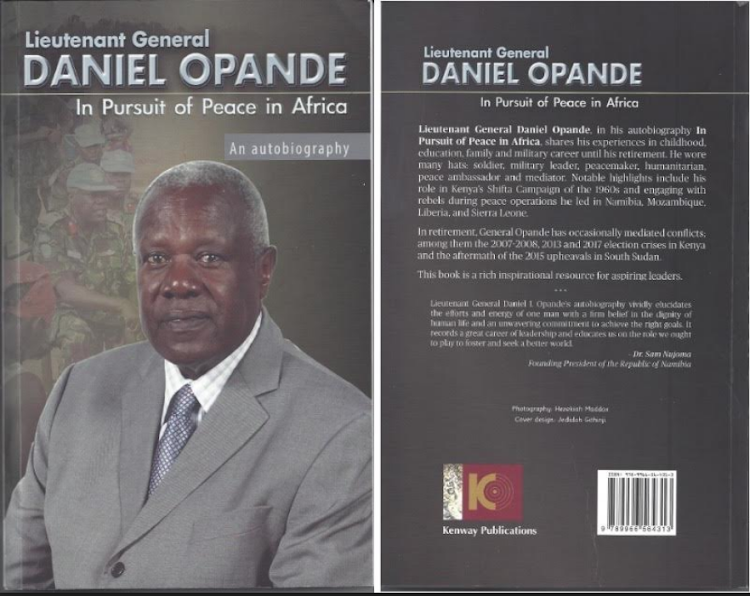 The importance of peace and security in Kenya, regionally, continentally and globally cannot be underestimated.

In the world today, there are too many conflicts and war processes. That makes this book inspirational because it shows how General Daniel Opande endeavoured to seek peace, despite all the challenges he faced. This can be related to Psalm 43:15, which says, “Seek peace and pursue it” and to his strong Christian foundation and upbringing.

The main objective is to inform about the author’s experiences and worldview and the review hopes to guide and ignite intellectual debate on the subject matter.

As the first-born son to Mwalimu Ishmael Opande and Beldine Omollo Opande, General Daniel Bezalel Ojijo Opande was born on August 18, 1943 in Gendia, Karachuonyo, Homabay county. He has four sisters. He was married to the late Rose Mildren Opande and they have two daughters and three sons. Currently, his best friend and partner is Dawn “Akinyi” Smith.

Many know General Opande from his documentary Getting the Guns from the Boys. However, unknown to many, he is a famous man who has worked in different capacities since 1964, when he was commissioned as a Second Lieutenant, to 1998 when he became the Vice Chief of General Staff, the second-highest military post in the Armed Forces in Kenya.

It is also the most senior adviser position to the Chief of General Staff. He has commanded some of the most volatile peacekeeping operations in Africa including, Namibia, Mozambique, Liberia and Sierra Leone.

In the 60’s, he participated in the Shifta campaign with Somali secessionists in the Northern Frontier District. He has brokered some of the most complex peace deals in the region, including Kenya’s political crises of 2007-08, 2013 and 2017.

Evidently, he wears many hats: A soldier, leader, peacemaker, humanitarian, peace ambassador, mediator, and is highly regarded within diplomatic circles, making him best suited to write this book. He suffered major injuries while parachuting, skydiving and in a car accident. These have motivated him but also slowed him a bit. He is a great golfer who finds time to relax.

The book has 16 chapters and 238 pages, extremely well executed, written with great originality and a wide range of factual evidence and images. This enhances its value and relevance.

The standalone chapters give an excellent opportunity for academic research. The use of “first-person” clearly brings out the actual feelings and emotions, allowing the reader to grasp quickly the author’s thoughts and experiences. It gives a sense of connection and a feeling of knowing the author.

The account of historical events such as “Gor Mahia”, “Lwanda Magere”, and “Nyamgodho wuod Ombare” and real life stories introduces unfamiliar places and new developments in peace and security that make the book pleasurable to read. Although the book talks about personal life, by extension, it outlines the life of a successful soldier and the challenges he faces in daily life.

General Opande is presented as a humble and modest man who endeavoured to meet the high and the low alike. He risked his life going to rebel zones without a gun and with a strong belief that to achieve peace, everyone must be involved. Their positions, ranks or locations did not matter. He respected and dialogued with them, applying all his negotiation skills, especially when dealing with rebel leaders. These qualities earned him high respect.

Transparency, honesty and acknowledgment of weaknesses

He comes across as very truthful. We get to know about his family and even his sickness. He acknowledges when he made mistakes like sending military observers to areas where their lives were at great risk without adequate protection. He addresses the much spread rumour that he was overlooked for the post of Chief of General Staff. We learn about operations of the military, including even the exhumation of President Jomo Kenyatta’s body.

Belief in people and their well being

General Opande did everything to ensure the comfort of his military, keeping them busy and meeting their needs. He believed that people are human regardless of their positions. For example in Sierra Leone, he went out of his way to identify the remains of four Kenyan soldiers killed in 2000. He ordered their exhumation and repatriation back to Kenya. He did everything to make a difference in people’s lives, believing civilians are innocent people caught up in conflicts not of their own making.

The book is highly balanced and objective. I can say with confidence that it joins the list of some of the well-written biographies such as “Eisenhower in War and Peace”; “A Soldier’s Story” ; “In Hostile Skies: An American B-24 Pilot in World War II”; “The Forgotten Soldier; The Classic WWII Autobiography;” and “The Biafra Story: The Making of an African Legend” etc. In the Biographical Works Section, “Long Walk to Freedom: The Autobiography of Nelson Mandela” and A Handful of Men, The SAS and The Battle for Rhodesia could be added.

In line with Peace Support Operations, General Opande made use of all diplomatic, civil and military means, and to succeed, he worked with many people. This book, therefore, should be read by different people in society including, presidents, diplomats, government officials, peacekeepers, rebels, academia, spouses separated due to work, business people and United Nations staff etc.

Reading this book completely changed my perspectives on the military and peacekeeping and I will definitely use it as a primary teaching aid.