ETHNICITY VS INDIVIDUALS AND ISSUES

• Many Kenyans still vote along ethnic lines and don't vote on issues, and voters in Kibra may not be any different. 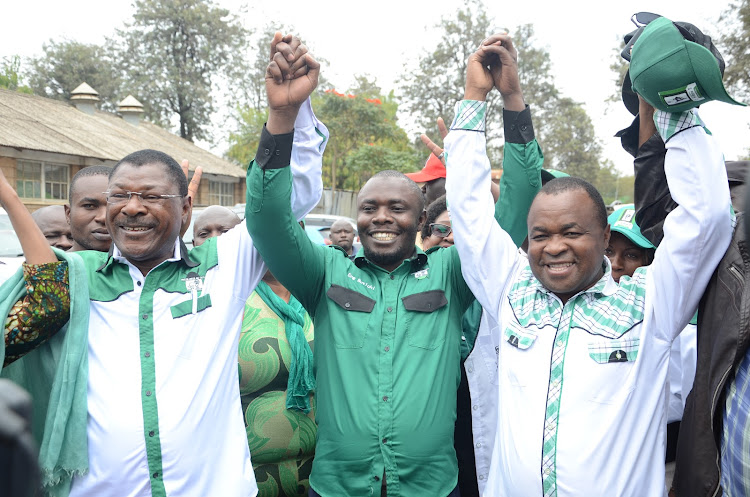 In a country where tribal arithmetic often determines how people vote, the debate on how the Luyha community might determine the outcome of the Kibra by-election comes as no surprise.

Many Kenyans still vote along ethnic lines and don't care about issue-based politics, and the voters in Kibra may not be any different.

Some of the key contenders come from the Luhya community and the talk is that the tribe’s vote bloc might be split to the advantage of rivals.

However, candidates are hoping that this time voters will be guided by other factors besides tribe when electing their MP.

The Luhya community has the highest number of voters in Kibra and two influential leaders from the tribe have both fielded candidates in the by-election on November 7.

Some pundits argue that although Owalo is Luo, he may get votes from the Luhya community because of his association with Mudavadi.

Some pundits argue that although Owalo is Luo, he may get votes from the Luhya community because of his association with Mudavadi.

Others have argued that the Luo, who are the second most numerous in the constituency, have also fielded several candidates, in fact, more than the Luhya. If the votes are split along tribal lines,  the Luo community will be the biggest casualty.

Others have argued that the Luo, who are the second most numerous in the constituency, have also fielded several candidates, in fact, more than the Luhya. If the votes are split along tribal lines,  the Luo community will be the biggest casualty. Leading the onslaught from the Luo community is ODM’s Imran Okoth, brother to the late Kibra MP Ken Okoth.

Kenya has 44 officially recognised tribes and candidates usually form alliances with politicians from other ethnic groups to broaden their appeal.

Another discussion has been that the Luhya have more than 500,000 voters in Nairobi but have only two MPs — Westlands' Tim Wanyonyi and Makadara's George Aladwa — and very few MCAs.

The argument has been that their numbers in city elective positions does not reflect their population might and they should, therefore, elect one of their own.

Mudavadi has insisted that the people of Kibra will not vote for the tribe but for the person who will serve them "and Owalo fits the bill.”

While introducing Owalo, Mudavadi said the ANC has a strong candidate and people should vote for him because he has the experience, skill and determination to represent the people of Kibra.

ANC chairperson Kelvin Lunani says he doesn't believe the Luhya vote will be spilt since people will go for a person they believe will address their needs.

“To my understanding, the people of Kibra are not tribal and our candidate is not even Luhya. Luhyas are the largest but Luos have more candidates. Kibra people want a leader not a tribe,” he said.

He said Owalo will not play the tribal card to get support. “He is in touch with the people on the ground and tribe will not be an issue during his campaign,” he said.

Political analyst Martin Andati, running on the Modern Alliance Party ticket, says no one should think the Luhya vote will be split.

“There are, however, other local dynamics that people are not talking about," he said.

"There are three factors, one is the Luhya factor which is 40 per cent. Then there is the Okoth factor. People want someone who will articulate issues the way the late MP did and then there is the manifesto of the candidate,” Andati said.

He took a swipe at Mudavadi, saying he has been defending himself for picking a non-Luhya candidate.

“He has been saying that he was under pressure to pick a Luhya candidate but in the name of trying to be a nationalist, he picked someone not from his community,” Andati said.

He said Owalo is hiding behind the Luhya factor, which might not work for him.

“There are people in the area who were recently kicked out of their homes and going with the Handshake narrative might backfire. You cannot tell them about Handshake. They will wonder how that helps them yet it was just brought artificial peace,”Andati added.

Butichi, on the other hand, has been telling residents not to forget "their son" when they vote. The Ford Kenya candidate was born and raised in Kibra and says that enables him to understand what the constituency really needs.

“I am your son. Support me and we will do many great things together,” he told worshippers at a local church.

Another argument has been that ODM won the last two elections comfortably because the Luhyas and the Luos supported one candidate — Ken Okoth.

ODM will this time get the support of some Jubilee MPs led by nominated legislator Maina Kamanda, who abandoned their party candidate on Thursday.

Kimilili MP Didmus Barasa, however, asked why ANC and Ford Kenya fielded candidates in Kibra, yet there had been talks of the two parties having only one contestant.

He argues that the move will certainly divide the vote.

Wiper leader Kalonzo Musyoka has not fielded a candidate and is yet to declare which coalition partner he will support, given that all the other NASA parties are participating in the poll.

Unconfirmed reports indicate that Kalonzo is likely to throw his weight behind the ANC candidate.

With ODM candidate, Kibra race is shaping into a Raila-Ruto battle.
News
3 years ago

He petitioned IEBC after Kibra returning officer invalidated his nomination
News
3 years ago
Post a comment
WATCH: The latest videos from the Star
by ALLAN KISIA Political Writer
Siasa
21 September 2019 - 06:00
Read The E-Paper