• Constitutional Implementation Oversight Committee says there is likely to be a crisis for instance in the event country needs a presidential election. 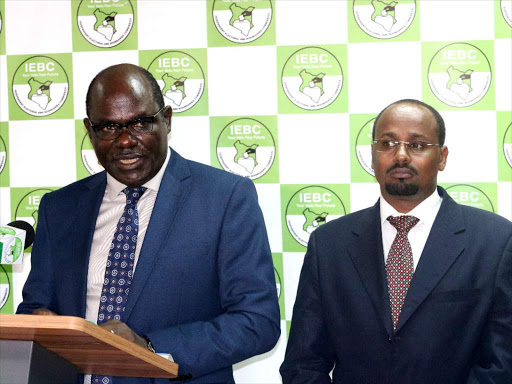 Members of Parliament are in a race against time to institute far-reaching reforms at the Independent Electoral and Boundaries Commission ahead of the 2022 General Election.

Core to this is an attempt to fill vacancies which have rendered the commission nearly redundant, hence unable to execute critical functions.

The feeling among those pushing for the changes is that the IEBC is broken beyond repair and needs a total overhaul to restore Kenyans’ confidence in the agency.

The polls agency has been operating without commissioners following the exit of Roselyne Akombe, Margaret Mwachanya, Paul Kurgat, and vice chairperson Consolata Nkatha.

Their exit left the Wafula Chebukati-led agency with little in its hands as, though properly in office, it cannot make key resolutions.

A team of legislators has warned that the country is at a precarious position and is susceptible to a political crisis if the IEBC status quo remains.

The Constitutional Implementation Oversight Committee says there is likely to be a crisis, for instance “in the event that the country needs a presidential election for whatever reasons”.

Their concern is that the law is not clear on how to replace commissioners in the event of a vacancy at the electoral agency.

It would take reconstituting a new panel as the last one was for solely putting the Chebukati team in place. MPs have proposed changes to the panel’s composition.

“We have commissioners in office. But the process for removing them for any actual or imagined misdeed is a fairly lengthy process. If you start the process of removal, it would mean a lot to this country,” Ndaragwa MP Jeremiah Kioni, the chair of the committee, said.

“It is important as we engage in this process to ensure that in the event that we need a presidential election tomorrow for one reason or another, we will know how to move on,” Kioni added.

The lawmaker said the committee is of the view that the country cannot allow itself to be in a lacuna which poses an electoral crisis.

“Let us start this talk early because if we wait until 2022 nears, we will be setting up this country for failure,” Kioni said.

Three Bills have been proposed to deal with the reforms in question, even as concerns abound that the commission is yet to review boundaries. In his proposal, Kioni wants the number of IEBC commissioners reduced from seven to five while retaining the selection panel as is.

We (Justice Legal Affairs Committee) will receive all the bills on IEBC after which we will reach a consensus on how to treat the lacuna in law on filling vacant commissioner slots.

Section five of the Independent Electoral and Boundaries Commission Act 2011 says there shall be a chairman and six other members.

Kioni's proposal is that the composition of the electoral and boundaries commission should be a chairman and four members.

Kiambu MP Jude Njomo Njomo proposes that the vacancies be filled six months before the lapse of the term of the chairperson or member of the commission.

He seeks to amend the Act so that the President, with the approval of the National Assembly, appoints a selection panel of 11 persons as spelt in the existing Act.

"There exists a vacuum in the mechanism of appointing members of the IEBC in case of a vacancy or lapse of the term of office of any member," Njomo's Bill says.

Baringo North MP William Cheptumo has also proposed to amend the IEBC Act to establish a panel which reduces religious leaders' influence in the selection.

The lawmaker wants the Parliamentary Service Commission and seven other persons nominated by the Public Service Commission, the EACC, the LSK, the NGEC, the Attorney General, the KNCHR, and the Inter-Religious Council of Kenya to choose the new commissioners.

The panel currently has representatives of the Parliamentary Service Commission, Kenya Conference of Catholic Bishops, National Council of Churches, and Supreme Council of Kenya Muslims.

The National Muslim Leaders Forum and the Council of Imams and Preachers of Kenya, Evangelical Alliance of Kenya, and the Hindu Council of Kenya also have one slot each.

But governance experts feel that the reliance on religious leaders locks out other civic actors. Frankline Mukwanja of the Centre for Multiparty Democracy says they feel the current panel is too large and doesn’t represent various stakeholders in the poll process.

“There is a need for clarity on the process of appointing the four representatives of the Parliamentary Service Commission. The question is, which interests do they represent and what qualifications should they have?”

In rooting for political parties to have more say in the selection, Mukwanja holds that the team selected by religious leaders did not live up to Kenyans’ expectations.

“It is in the public domain that the team was ineffective, suffered high mistrust from Kenyans, among commissioners themselves and between them and the secretariat. What is the basis of relying on almost the same selection process to come up with a new team?” he asked.

The guiding question in the new selection process is; must the chairperson be qualified to be a judge?

“What is the real good reason for insisting that the chair of the IEBC must be qualified to be a judge?” Mukwanja asked.

The other question MPs are grappling with is a proposal that the President be denied the power to select a chairman. CMD wants the commissioners allowed to elect a chairman who must not be qualified to be a judge of the High court.

With the court ruling that the Chebukati, Boya Molu, and Abdi Guliye are duly in office, the priority is likely to shift to how to replace the four. However, the storm is yet to be over for the commission in the wake of the painstaking process of replacing CEO Ezra Chiloba.

The latter was axed last October at the height of their frosty relationship with the chairman over queries arising from procurement of equipment used in the 2017 general election. The deadline for applications towards filling the CEO post was on June 3, a process which followed a petition against IEBC’s call for 15 years experience.

Judge Hellen Wasilwa ruled in March - following a petition by one Henry Manundu citing a violation of statutory provisions, that the requirement was more than what is provided for in the law.

“There should be no regression, addition or subtraction to the said qualifications,” Wasilwa ruled then, stopping the initial recruitment.