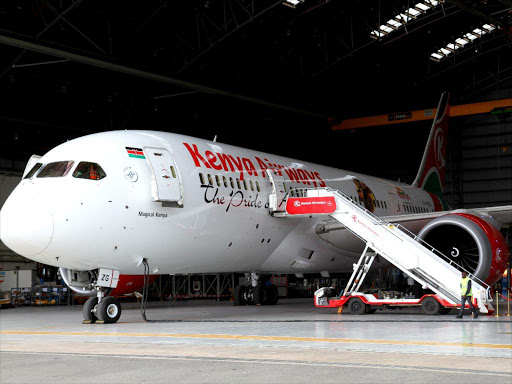 The Public Investments Committee has warned of massive losses in the proposal for Kenya Airways to take over JKIA for the next 30 years.

The airline seeks to run the facility in a concession agreement with the Kenya Airports Authority, eliciting a debate on its capacity to handle the operations.

Whereas critics have argued that the authority would lose control of the country’s largest airport in the event the proposal sails through, others believe it is the only way to salvage the collapsing KQ.

But PIC says it is concerned the country would lose Sh8 billion in revenue annually if it allows KQ to run the airport — KAA’s main revenue-generating asset which also contributes 5.1 per cent of the country’s GDP.

In its report tabled in Parliament on Wednesday, the committee laid bare pieces of information they believe have clouded the plan in the wake of fears of conflict of interest and manipulation by authorities.

Immediate former Transport PS Paul Maringa issued the first official communication on the deal, said to be birthed by a Cabinet resolution minuted as CAB 28/18.

He wrote to KAA in May 2018, informing them of the KQ proposal, a message that was followed up in another reminder by current Transport PS Esther Koimet in October last year.

In her letter, she asked the airports authority to treat the proposal as a ‘matter of urgency’, an issue that has elicited suspicion around the plan.

The committee further reports that during the KAA board 296th meeting, a member said the proposal came from a high office, hence, should be fast-tracked.

However, the government has defended the plan saying it is the only way to save Kenya’s flower exports and tourism inflows – largely carried by KQ.

Deputy President William Ruto, during an event at the Supreme Court on Thursday, castigated MPs for poking holes on the proposal before the transaction is finalised.

The DP accused Parliament of denying the Executive space to work on “a plan that would see Kenya Airways regain its footing in the East African airspace”.

“We request that the legislature gives us the space to restructure this relationship. We are a responsible government and will subject the proposal to the House for approval,” the DP said.

Ruto said the proposal was mooted in a Cabinet meeting following concerns that Kenya Airways might go under with the governments’ investment.

He said the plan is to help the country save its earnings in tourism, horticulture, and revenues for KAA.

The DP said the intention is to have a win-win situation that would see KQ thrive as the government continues to reap from the benefits of a vibrant airport.

“No transaction has taken place between KAA and KQ concerning JKIA. It is unfair that even before we start, all manner of allegations are flying around. We must be robustly independent and constructively interdependent,” he said.

But the fear, according to the PIC team, is that KQ is a “loss-making entity which cannot be entrusted with the management of an airport that earns 83 per cent of KAA income”.

“It is a bad deal. The concession fees will not significantly cover the operating costs of the remaining airports, airstrips, and head office,” PIC chairman Abdulswamad Nassir told the Star.

According to the Privately Initiated Investment Proposal (PIIP) by Kenya Airways, the annual concession fee has been set at Sh2.9 billion. This is projected to rise to Sh3.6 billion and peaking at Sh6.1 billion in 2033.

Should KAA cede operations to KQ, it will suffer a Sh3.7 billion shortfall in its recurrent budget for 2018-19.

The authority needs about Sh6.6 billion for operations. As of February, KQ owed KAA Sh3.8 billion.

The KQ proposal further assumes that KAA will retain liabilities including those arising from JKIA operations.

“The situation would leave the airports authority worse off financially,” the 18-member committee concluded in its report to the House.

The probe also revealed that KAA was given a mid-December 2018 timeline to complete the transaction.

Chief Executive Officer Sebastian Mikosz earlier told MPs that the plan is not to merge KQ and KAA but to improve the airport’s operations.

He explained that according to the plan, KQ will run the facility in a Public Private Partnership structure.

“It is to have a concession operator agreement, which means that the building and all the land will remain owned by KAA and ultimately owned by the government,” he KQ boss said.

Other vibrant entities such as Fly Emirates, Rwanda, and Ethiopian airlines are reportedly almost edging out Kenya in the business.

Parliament has written to the Auditor General Edward Ouko to institute a special audit of the transaction.

National Assembly Clerk, in a February 21 letter, said the audit will focus on the risks that KAA and the public is exposed to from the proposed takeover.

The audit will also focus on the procurement process by KAA for the services of transactional advisor – MMC Africa. The adviser was hired at Sh150 ,million of which 10 per cent is already paid.

“The committee would appreciate if the special audit is completed by March 4 to enable it to conclude this matter,” the letter signed by Jeremiah Ndombi reads in part.

The Abdulswamad-led team has asked KAA to submit a copy of the Cabinet memo that was cited as the genesis of the negotiations.

The committee also seeks to be served with a copy of the PIIP as drawn by KQ.

"A copy of the letter forwarding the proposal was submitted instead of the proposal," the PIC report reads.

On the other hand, MPs further want correspondence by KAA in response to the letters by PSs Maringa and Koimet, and also by the KQ managing director.

PIC is also pushing for KAA to furnish it with a report by MMC Africa on the proposed takeover after the authority said they only had a draft which could not be shared for public consumption.

Appearing before the Transport Committee, Kenya Airways defended the deal saying it would cushion the country from a shrinking market share compared to the performance by its peers.

The country’s market share in the East African airspace has fallen to 34 per cent, which is way lower than what other African airlines control.

KAA chief executive officer Jonny Andersen said the authority must think of a way to have a viable aviation sector to stop further loss of market share.