Soomal: Dispatches from a nomad: Politics behind the Somalia-Kenya diplomatic row 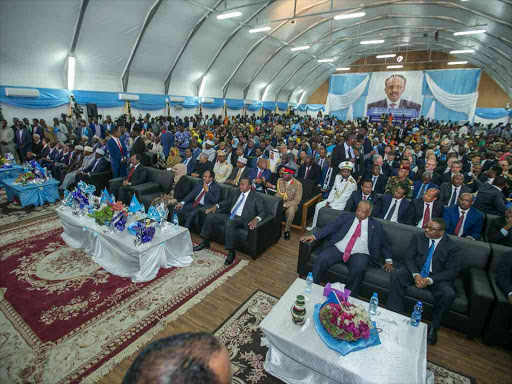 We were all shocked when on February16, Kenya announced it had summoned its Somalia ambassador and that it also sent back the Somalia Ambassador to Kenya.

This was protest to news that Somalia had apparently auctioned off an oil and gas rich maritime blocks contested by both countries.

Well, it is now emerging that the diplomatic row between Nairobi and Mogadishu could be as a result of an internal power struggle inside Somalia rather than the much-reported scramble for oil and gas deposits located in a disputed area of the two countries maritime border.

We know the Kenya-Somalia maritime dispute is not new as it actually came into the limelight way back in 2014, and Somalia took the matter a year later before the International Court of Justice where the case is still pending.

It is worth noting that the said oil and gas rich disputed maritime border area is technically located in Kenya-Jubaland state of Somalia common sea border in the South of Somalia. Coincidentally, this is the same State that was liberated by Kenya Defence Forces in 2012 from al Shabaab.

Now, the Jubaland state presidential election is scheduled for August. President Ahmed Mohamed Islam aka Ahmed Madoobe is a darling of Kenya as he fought alongside KDF to wrestle al Shabaab out of Kismayo, the capital city of Jubaland state. He is the favourite to retain the position and is considered Kenya's main ally in Somalia.

However, it is not the case with the Somalia ruling party "Nabad iyo Nolol" or Peace and Prosperity Party of President Mohamed Abdullahi Farmaajo, which opposes Madoobe out of Farmaajo's own re-election bid in 2020 when Somalia is expected to hold its national elections. The ruling party sees

Madobe as a threat to its ascendancy to power.

In my previous Soomal column posts, I have explained how the five federal states of Somalia — Puntland, South West, Galmudug, HirShabelle and Jubaland, hold the key to who wins the next Somalia presidency because members of Somalia's next parliament, who will elect the President, will themselves be elected from these federal dtates.

If you control a federal state in Somalia you are likely to decide who becomes an MP and in turn directly ensure a block presidential vote from that same dtate. This is Farmaajo's biggest headache and also his main objective. He wants to control these states to help him amass enough MPs to vote for him in 2020.

Sources in Mogadishu privy to the alleged Somalia's February 7 London marketing of its hydrocarbons said Mogadishu has not sold any oil and gas blocks and that legally it cannot do so at th3ee moment.

This is because the country lacks the constitutional regulation and mandated institution to manage, guide and oversee such a huge public investment.

Talking of the constitution, Somalia lacks a petroleum law as it has not been passed by parliament and National Petroleum Authority, which is the public entity, mandated to manage and oversee all petroleum-related matter is also yet to be formed.

Could the government really have proceeded with an unconstitutional sale of its hydrocarbons? Which companies would risk buying off a disputed and more seriously unconstitutionally floated blocks?

I don't think so.

Even the Somalia parliament and the senate came out gun blazing when Kenya accused Somalia of illegally floating the country’s hydrocarbons resources without the necessary constitutional framework.

The sources said that the whole hullabaloo about the alleged oil and gas sale was/is simply aimed at irking Kenya to react, and that is exactly what happened last Saturday. The brains behind the move created an artificial political crisis with the hope to benefit should Kenya fall to their well-calculated move, which is to ultimately force Kenya to withdraw its forces from Jubaland.

If this happens, they believe it will give them a leeway to rig the election and install their man in Kismayo.

What they fail to comprehend is that KDF is now an African Union peacekeeping force. Kenya has no authority over its soldiers in Somalia. As such, their withdrawal in Somalia can only be approved by the AU, not Kenya.

The Somalia ruling party recently defied all, including international pressure in South West State presidential election in Baidoa, to install their man, Abdiaziz Laftagareen at the helm in a sham election preceded by a bloodbath following the killing of 15 innocent protesters.

I will not be surprised if indeed it turns out to be true that they manufactured this oil and gas crisis with the hope of turning it into a political advantage in their favour. Power can easily blind you to desperately do anything to cling to that power.

Whatever the case, the upcoming Jubaland election is turning out to be a decisive election in Somalia, which needs to be carefully observed because its bound to cause an upset and is likely to stir more controversy because the stakes are so high.

Remember also, whoever wins the Jubaland race will be an integral figure should the time comes to auction those disputed maritime blocks as it falls under his jurisdiction. If that is the case, why wouldn't Mogadishu not try all tricks, including faking the said sell as it just did, to be ahead of the game?

Just like a game of chess, in politics you never hesitate to trick your opponent into a trap for the ultimate goal — to win.

It is highly possible that we have been tricked to think of the sale of the disputed oil and gas blocks to give them an edge during negotiations to pressure Kenya from dropping their man Madoobe in Kismayo in turn for Mogadishu to let go of the alleged sale until it is resolved by the ICJ. Somalia already hinted this in their statement released after Kenya's reaction.

I believe, this is the politics behind the Somalia-Kenya diplomatic row.