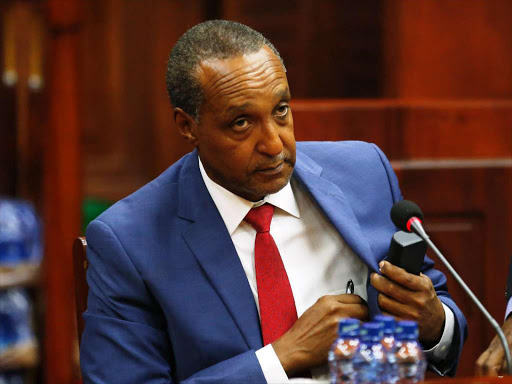 ack of clear structures on succession at the Ministry of Foreign Affairs continues to cause confusion, disquiet and infighting among senior directors and ambassadors at the headquarters.

It is emerging the recent push and pull over President Uhuru Kenyatta’s diplomatic appointees was a culmination of the discord.

Career diplomats, some whom have stayed at the headquarters for over 10 years, are feeling disfranchised as Uhuru continues to give diplomatic postings to political and civil servant rejects since 2014.

Analysis by the Star shows not more than 10 career diplomats have been posted as envoys since Uhuru came to power, further heightening tensions at the ministry.

“The recent information published by some newspapers was leaked to paint the nominees as unwanted, and probably a rethink of the nominations and the subsequent appointments,” a source who did not want to be named said.

Speaking to the Star on the phone, Foreign Affairs PS Macharia admitted the concerns are there and are legitimate. “We are, however, working on them in the context of successive management process targeting all cadres, from the senior directors and career ambassadors to the junior officers in a progressive manner. We are working with the Public Service Commission, and CS Monica Juma is leading this process,” Amb Kamau said.

He said the process will be complete in four to six weeks. In the strategic plan 201819-2022/23, the ministry notes lack of clear structures on succession, knowledge and information management as a weakness in its SWOT analysis.

Foreign Service Bill 2015, which is still before the House, states: “In the appointment of High Commissioners and Ambassadors, the appointing authority shall endeavour to maintain a fair balance in favour of serving career Foreign Service Officers, to ensure that professionalism and career progression are not compromised”.

Some officers appear to be making fast progress in their careers though.

June Ruto, who joined the ministry in 2014, is now a charge de’ affaires, and she received CS Juma in Poland when she visited for a Warsaw conference. Last year, she was a consular in Paris, Italy, and she hosted CAS Ababu Namwamba.

There have also been complains within the ministry that political appointees performance have been detrimental in furthering Kenya’s Foreign Policy. The documented policy was launched in 2014.

Most politicians resign and return after three to four years to run for office.

In the last General Election,

Asked whether the ministry has a system to evaluate envoy’s performance, Kamau said that is done through personnel assessment reports within the public service system. However, Kamau said they are considering to have a different system because “of the unique roles at the ministry”.

“In many countries, the Foreign Affairs ministry is a special cadre in terms of recruitment and remuneration,” he said.

There are also directors and their deputies who are yet to be posted or promoted to ambassadors.

“There is a lot hopelessness. Some officers are almost retiring having stagnated in the same job group for years,” a source said.

“Sometimes dealing with political appointees is usually hectic ... it’s problematic,” another source said when asked why there was delay in departure of appointed envoys.

corruption, and their passports confiscated by the courts.

after two years, some have remained at the headquarters.

Sources said some missions abroad are also understaffed with no substantive ambassadors.

Kenyan embassy in Russia, for instance, has been vacant for nearly four years now, and the wait seems to get longer with Ekai’s prosecution.

In Nigeria, which has concurrent accreditation of 12 other countries in West Africa, had been vacant until Wilfred Machage, another former politician, took over on January 8, when he presented his credentials to President Muhammadu Buhari

There are also concerns that some envoys have

overstayed their four-year tour of duty.

These include Joseph Sang, who has been in Stockholm for since 2012

(replaced Muhindi) and Koki Muli who has been in New York for eight years.

However, Prof Maria Nzomo says the previous career doesn’t matter “so long as the person appointed is competent and understands his or her role”.

She is the director, Institute of Diplomacy and International Studies at the University of Nairobi.

“There are rules of engagement for each country. Each country has specific interests it wants to advance in a specific country. For every country, we have an agenda, and the embassy works towards that.

It will depend on the rules of engagement, the foreign policy and interests Kenya want to advance abroad, she told the Star on the phone.

The role of the embassy is in the constitution and it is the prerogative of the President to know whom to appoint," she said.

Post a comment
WATCH: The latest videos from the Star
by Eliud Kibii @eliudkibii and Benjamin Imende @TheOkinda
Siasa
23 February 2019 - 00:00
Read The E-Paper