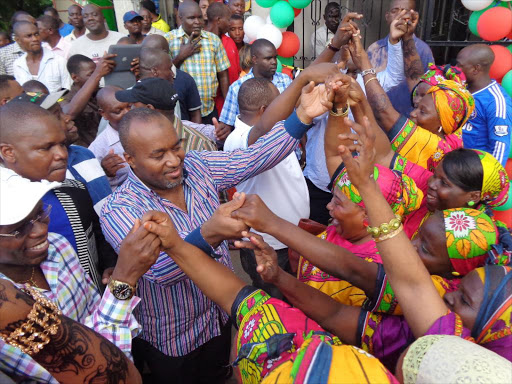 Among other things, these former allies, all drawn from ODM, want Joho to work with Deputy President William Ruto and to support his 2022 presidential bid.

They also want him to join them in their quest to be in government.

Their argument is that after decades in the opposition, it is time the Coast joined the Jubilee government to attract development.

Last week, in the presence of DP Ruto in Kwale, the ODM politicians repeated the message that the Coast would “never again be in the opposition.”

They also pledged to support Ruto, who, they said, “will be the next President.”

To cap it all, they asked the Mombasa governor to join them in the change crusade, if he is to remain relevant.

But Joho’s supporters did not take the political talk lying down.

At the Kwale event, however, Ruto dismissed the politicking, repeating that his visits to the Coast were about development.

The ODM revolt began last March as a protest at the MPs’ exclusion from the Uhuru-Raila handshake.

Within weeks, it had spread across the Coast region and included thorny issues such as the support for Ruto in 2022.

Today, the protesting MPs – over a dozen of them — mostly drawn from ODM, have had the implicit support from the governors of Kilifi, Taita Taveta, Tana River, and Kwale.

Left unchecked in the long run, the revolt may reverse the ODM wave that has been in place since the 2007 elections.

Already, the political unity that had prevailed before March 9 is evaporating.

Old alliances are coming down and new ones emerging.

Nevertheless, ODM remains the most popular party and it shall remain so in the foreseeable future, despite the changing political dynamics.

In fact, none of the protesting MPs would be willing to relinquish their seat for re-election on alternative parties.

In this sense, Joho is still politically relevant.

He has been the driving force behind the ODM wave and the election of some of these MPs.

We also know that ODM politics at the Coast is brewed in Mombasa and Joho has been the supervisor.

He still holds this clout.

The handshake has a lot to do with the realignments.

In working with and supporting Ruto, the revolting MPs are saying they are emulating the “Baba” Raila initiative in building bridges across the opposition divide.

Yet on the Coast, the handshake has been about burning bridges.

Former allies are splitting apart in the name of opposition fatigue and the 2022 elections.

Amazingly, Joho, the man at the centre of this political talk, has remained oblivious to it.

His only comment since March 9 has been to support Raila and the handshake.

Indeed, when President Uhuru Kenyatta and Ruto visited Mombasa to launch the Dongo Kundu by-pass project early this month, Joho was present to welcome them.

However, he has since refrained from attending Ruto’s subsequent visits to the region.

There is also the prevalent view that he would prefer to work with Uhuru to Ruto. It should be recalled that six weeks ago, Joho welcomed to his Mombasa office, Baringo senator Gideon Moi, Ruto’s political opponent.

Beyond this, Joho himself wants to vie in 2022, which means he and Ruto are political rivals.

Joho faces hard choices as he ponders his future after his second and final term.

What is clear though is that he is not ready and willing to lose his political grip in Mombasa y and the rest of the Coast region.

Neither is he ready and willing to abandon Raila and ODM.

He is not only a deputy leader in the party but also its face at the Coast.

The electoral wave the ODM has enjoyed in this region is owed to Joho.

He is the leader of opposition politics at the Coast and to relinquish this political power to competitors without a fight would be naive.

gains and Joho’s own political career.

But there is a hitch.

The rebelling MPs want to achieve political change too fast, too soon.

Yet change should be gradual, unless it is violent.

The starting point should be to explain why we should vote Ruto in 2022 and not any other person.

Words alone are not enough, yet this is exactly what the Roto political talk on the Coast has been about.

To reverse the ODM wave, the DP allies have a well-calculated strategy that is beginning to work.

This is the strategy to drive a wedge between the populous but poor Mijikenda communities and the wealthy but minority Arab/Swahili population.

This is why in part, the DP’s visits have focused on Kilifi, Kwale, as well as Mombasa and Taita Taveta counties.

Mombasa has about 45 per cent of the Mijikenda that politicians such as Joho have used to win elections.

Nevertheless, the impact of the Ruto 2022 presidential talk is yet to be felt.

ODM continues to dominate regional politics and the protesting MPs cannot dare to abandon the party and Raila now.

The fears to lose any by-elections occasioned by any abandonment of ODM could be real.

This is why Joho remains the undeclared coastal kingpin.