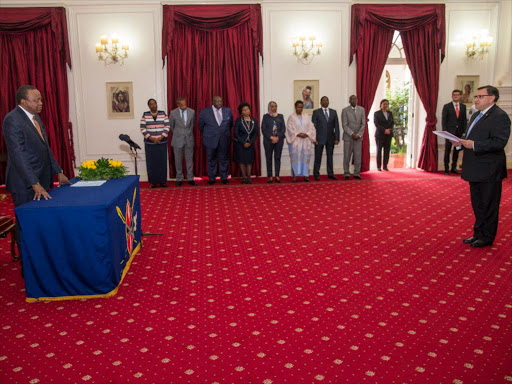 I am honoured to be the new Ukraine Ambassador to Kenya.

I have been a career diplomat for more than 25 years, serving in four missions and in the Foreign Ministry, where I have dealt with International Law, European Integration, United Nations and other international organisations. I will, therefore, be happy to apply this experience in Nairobi and, of course, gain more knowledge in the new environment.

Being posted in Nairobi provides a unique opportunity of serving simultaneously as a bilateral and a multilateral ambassador. For instance, predominant number of foreign envoys to UN in New York and Geneva deal largely with multilateral agenda, while their bilateral counterparts are based in Washington DC or Bern respectively. In Vienna, on the other hand, generally there are two representatives, most often coming from different backgrounds and even being required to speak primarily either German or English.

Another privilege is that one not only gets a chance to learn the country, but also in many cases the whole of East Africa region and sometimes beyond. With Ukraine having only six diplomatic missions in sub-Saharan Africa, and Kenya considered as a regional hub, I personally stand a chance to cover eight countries, with Malawi, Comoros and Somalia as a bonus.

Indeed, it’s a huge and demanding foreign affairs portfolio, where you have to multitask and follow up on a wide array of issues — developing a programme for a visit by a Foreign Minister of one country, working on a draft agreement on tourism with another, with election campaign unfolding elsewhere, Global Pact for the Environment Conference taking place at the UNON grounds and enjoying a lovely Sunday afternoon working on this article. The list is inexhaustible.

Nevertheless there is a number of priorities that we have defined, and a set of goals that we are focused on to achieve.

Strengthening political ties is a primary task and I am pleased to observe that our bilateral dialogue with Kenya has steadily grown, with several recent high-level meetings and visits, including last year’s official visit to Kenya by Ukraine’s Foreign Minister Pavlo Klimkin, having solidified these ties. By continuing on the same trajectory, we can build up truly sincere and reliable relations with Kenya.

In this regard, I believe this year’s scheduled visit to Ukraine by Kenya’s Foreign Affairs CS Monica Juma will become a platform for cementing our goals, including through concluding several important bilateral agreements.

I am also confident that our cooperation could further grow by ensuring consistent partnership between our parliaments, through exchange of visits on the level of speakers and establishment of inter-parliamentary group of friendship.

My other goal, which will help better implement national interests of our countries, is to work closely with the Kenyan government and assist it in opening, on the basis of reciprocity, its embassy in Kyiv.

My second priority is to improve our economic relations. Ukraine possesses strong agricultural and manufacturing capacities and, with 70 per cent of arable lands and 33 per cent of world’s reserves of rich black-soil, has always served as “bread basket” for Europe. Therefore, concluding an agreement on establishment of joint commission on trade and a memorandum on agriculture could help us establish our partnership in these spheres.

Also considering Kenya as a leader and a trade gate to East Africa, we are ready to partner with Kenya on supplying agricultural products and machinery, as well as products of other industries to the EAC region.

The third priority is to take more Kenyan students to Ukrainian universities. Every year our educational institutions welcome students from more than 150 countries. Last year we had 64,000 students studying in Ukraine. Today, foreign students have an opportunity to study in more than 240 universities in Ukraine and gain degrees not only in popular spheres as ICT, engineering or medicine but also in other fields. As we work on promoting education opportunities in Ukraine, we also believe that signing an agreement on education could make education in Ukraine more accessible for young Kenyans.

Tourism is another promising area of our cooperation. Over the past year we have done a great deal to present the Ukrainian tourism potential to the Kenyan people. We have simplified procedure of obtaining visas, reduced the consular fee, introduced an online appeal and registration system and opened a visa centre.

Kenya is also becoming more attractive destination for Ukrainian tourists with its unique nature and wildlife. I believe the main tools that could greatly contribute to this are an Air service Agreement and an Agreement on tourism.

Kenyan security forces were able to provide a quick and professional response in the recent terror attack, thus greatly reducing the number of casualties. Ukraine, suffering itself from terrorists, backed by the Russian Federation, strongly condemns terrorism. Being a member of the UN Security Council in 2016-17, Ukraine actively supports Kenya’s resolve to continue fighting against terror. We also believe that when Kenya becomes a member in the Security Council in 2021-22, it will make significant contribution to the global fight against terrorism.

As a practical step of intensifying our mutual measures of combatting terrorism, Ukraine and Kenya could also develop a bilateral legal instrument on preventing terrorism financing. Also, Ukraine could supply various specialised hardware, such as protective equipment, small arms and light weapons, as well as light and heavy machinery.

Lastly, I will be proud to introduce Ukraine to Kenyans. With our long history and rich culture and numerous attractions, including seven Unesco heritage sites, my country’s natural, architectural and cultural beauty is unmatched.

And despite the ongoing Russian aggression against Ukraine, in particular the recent wave of escalation at sea, we will continue to use all tools available under the international law to defend our sovereignty and territorial integrity.

This month we achieved a long-term and a long-hoped goal – the Ukrainian Orthodox Church gained its autocephaly which united the divided Ukrainian Orthodoxy and ensured independence from Russian patriarchy. This historical event brought to a successful end centuries long struggle for our national identity.

I believe that public diplomacy is one of the pillars of the diplomatic service as it plays an important role in delivering the image of a country to the wider community of a host country. I have been in Kenya for only three months, but I have unequivocally fallen in love with this magnificent country.

I will, therefore, find more time to explore Kenya better, enjoy its warm climate and beautiful nature, so that I can bring it closer to Ukraine.

Andrii Pravednyk is the Ukraine Ambassador to Kenya