SIASA: Is Oparanya becoming the 'next big thing' in Luhya politics? 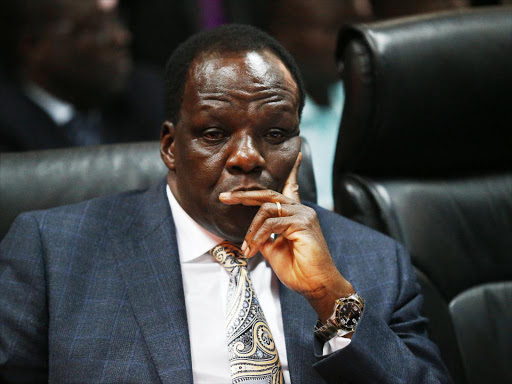 Kakamega Governor Wycliffe Oparanya when he appeared before the Senate County Public Accounts and Investments Committee on the audit queries raised by the auditor general for the financial year 2014/15. July 2018. Photo/Jack Owuor

This can be said of Kakamega Governor Wycliffe Oparanya, who not only has his political clout bulging but his development record in his backyard has also been acknowledged.

Unlike his towering stature, Oparanya, a certified public accountant is a man of few words, and is credited with various projects in roads, health and sports.

Oparanya started schooling as Mabole Primary School, sat his O level at Butere Boy's before joining Kisii School for his A Levels.

and MBA Finance, both from the University of Nairobi.

He is now pursuing a PhD in Economics from the University of Dar es Salaam, Tanzania.

Before plunging into politics Oparanya, an international finance management consultant, was the CEO Aerotec Ltd, an airport ground handling company. He also served as Treasurer for AFC Leopards Football Club.

He also served as Planning and National Development and Vision 2030 minister during President Mwai Kibaki's second term, under the coalition government. He was from the ODM wing.

It is during his tenure that Kenya conducted the 2009 controversial census.

were inflated in the population count.

His election as the Council of Governors chairman on January 14, and last year as the

Lake Region Economic Bloc boss is seen as a vote of confidence, which is likely to spur his political

The conversation on Oparanya comes at a time when the Western region is seeking for unity ahead of 2022 polls.

Oparanya last year said, “Luhyas must organise themselves to ensure the community is in government. I am ready to present a single candidate in the next polls.”

In February last year, Oparanya hinted he will run for presidency in 2022 after completing his second term.

“You have seen how we have worked to transform Kakamega. In 2022, I will be looking for a higher seat because my development record at the county can be seen by everyone,” he said in

and conducted by University of Nairobi,

Oparanya emerged as a second popular leader in Western,

Mudavadi, who was named

the Luhya community spokesperson, had 38 per cent rating, while Oparanya and Ford Kenya leader and Bungoma senator Moses Wetang'ula garnered

“Given that Oparanya heads one of the largest counties in the country, his performance so far as a governor and the new positions make him

political factor not only in the Western region but nationally,” nominated MP Godfrey Osotsi said.

He said his election as CoG chairman, which came as a surprise,

puts him in a strategic position in national politics.

"He has exemplary good governance skills that has made him rank highly among his peers, giving him a national appeal politically," he said.

who said the positions are a stepping stone

he can use to scale the political ladder.

The positions are preparing him for big things in politics, Andati said.

CoG chair post gives him a huge platform. He is the

between the counties and the

and this comes with

a lot of visibility

and influence,” he said.

and influence it puts him in good standing. However, in regards to Western politics, Mudavadi remains a front runner who enjoys a national outlook.”

He, however, cautioned Oparanya not to concentrate much on new post at the disadvantage of his people.

“We congratulate him and wish him well. We are happy that the seat has come home. But let us not read too much into this. Western politics is all a different ball game,” Vihiga Senator George Khaniri said.

it was flawed to analyse his rise based on the CoG post, or the mere fact that he hosted the devolution conference

and Mashujaa Day, which is done on rotational basis.

“People should not read too much into it because it brings unwarranted expectations. The position is inconsequential to his stature. It has no extra allocation or resources, either to the county nor the governor,” Anangwe said.

“The same applies to the regional bloc. It brings no leverage to him as there is no any extra opportunities or resources to dispense,” he said.

“He is on the right track. He has been consistent in ODM and when other politicians were trooping to UDF prior to 2013 elections and to Jubilee ahead of 2017 polls, he remained put. This consistency shows he is trustworthy and steadfast,” he Otostsi said.