CAROLINE KIBII: Culture: A Source of pain to women and children living with disability 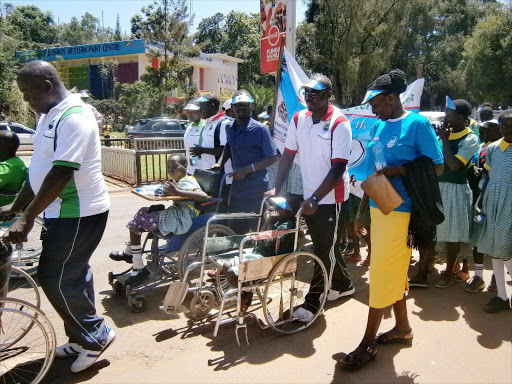 Students and pupils of the Daisy Special School for the physically challenged in Kakamega. /FILE

Culture being a defining factor in our society can be a huge impediment to progress. I am talking about cultures that incriminate women who give birth to children with disabilities. Cultures that force women to hide, disown or kill their physically challenged children or cultures that drive women out of their marital homes.

In this age and era, a disability should not be regarded as a bad omen or a curse. Women need not be blamed for having a child with a disability. Several dynamics surround the causes of disabilities. It is the lack of knowledge and information on matters that lead to stereotyping.

Disability is not an inability. There people who have gone past their disability to become global influencers. Such individuals are utilising their talents in the best way possible.

We are living in a time where technology has played a vital role in the lives of people with disabilities. Learning and movement aids are available, specialised schools, treatment, care as well as caregivers.

However, not all places have access to such resources. In fact, some communities are not aware that their children can access specialised treatment, go to special schools or even get the necessary equipment to aid their day-to-day activities.

Such communities, and especially women and their physically challenged children, are doomed by cultural complexities that have forced them to stay in the dark instead of seeking advice. Marginalisation has contributed to lack of information.

Susan Hampshire, a three-time Emmy Award winner, once said, “It is a lonely existence to be a child with a disability which no-one can see or understand, you exasperate your teachers, you disappoint your parents, and worst of all you know that you are not just stupid.”

Recently, I spent time with women and children living with disabilities from Dol Dol, Laikipia North. I could read misery. It was clear to me that their own culture has enslaved them.Some of the women had to leave their family homes to save their lives and those of their children. Some had been forcibly evicted.

These are women who have been ridiculed, discriminated against and blamed for a situation over which they they have no control. They have little information on what to do to help their children improve their situation. A relatively large number are illiterate or semi-literate.

This is a community where the women have little to say. They are still regarded as second-class individuals. The men have power over almost everything. Given that women cannot make decisions on issues that affect their lives makes it even more challenging to address the problem.

It is time to salvage the situation, particularly among the pastoralist communities. There is a need to create more awareness. People need to understand the underlying aspects of disabilities.

Culture is a fundamental part of most communities from pastoral areas. But we need to go past inhumane customs that hinder other people from leading their lives with dignity.

Solving this problem requires collaborative effort. I urge all the stakeholders, more so the government through the National Council for Persons with Disabilities to spearhead awareness forums and activities as well as establish facilities to cater for the needs of persons with disabilities in the affected areas.

It is prudent that these activities are done at the lowest levels of society, preferably at the village level, instead of towns. A holistic approach where the community members are actively involved will make it easier for the people to internalise the information and act on it.

Caroline Kibii is an environment scientist and the founder www.womennarrate.com