SOOMAL: Dispatches from a nomad: Bruising battle for South West State of Somalia 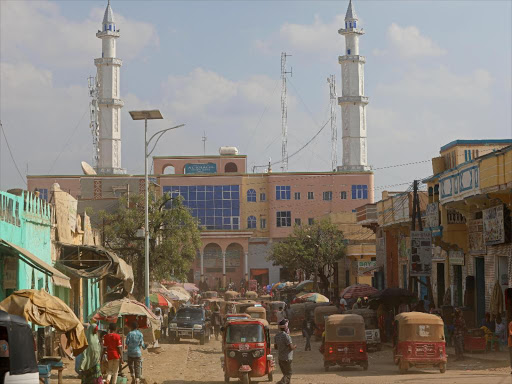 The sleepy agricultural town of Baidoa, southwest Somalia, has suddenly come alive from a heated campaign trail ahead of an upcoming South West State Presidential election on Wednesday.

Somalia's ruling Tayo Party of President Mohamed Abdullahi Farmaajo popularity will be tested in this election. This is the first polls of a federal state since the ruling party swept into office on February 8 last year.

The stakes are so high to the point the current South West State President Sharif Hassan Sheikh Aden, who together with other regional leaders fell out with President Farmaajo, has decided not to defend his seat.

Sharif Hassan apparently was put under a lot of pressure by the government until he resigned. There are strong rumours that he might have accepted an $8 million dollar payment not to defend his seat, when he sensed the going was tough.

The Somalia government has put its weight behind former Minister of Water and Energy Abdiaziz Hassan Mohamed aka Lafta Garen, who resigned to vie.

Sharif Hassan's decision has thrown wide open the contest and has forced the remaining 11 candidates to forge alliances.

Two groups have emerged out of these political alliances. One is supporting the government candidate, Abdiaziz Laftagareen, campaigning under the ruling party banner, ‘Nabad iyo Nolol’ or Peace and Prosperity. The other alliance is backing former al Shabaab deputy and one time spokesman Mukhtar Robow aka Abu Mansur under the Coalition of Change Alliance.

The South West State presidential election will be decided by 147 lawmakers. The winner needs a two third majority. The two clear favourites are Garen, bankrolled by the government and Robow, who is said to be the people's choice.

Robow's supporters are already crying foul alleging the government is enticing lawmakers with huge bribes of between $25,000 to $50,000 should they elect Garen. This claim has also been raised by the Committee of Inter State Cooperation (CIC), which brings together Somalia's five Federal States of Puntland, Jubaland, Galmudug, HirShabele and South West State.

There are even reports indicating lawmakers were recently flown to Mogadishu, where each of them was paid $5,000 and given a pistol for personal protection. One lawmaker who refused to be named for fear of reprisals has confirmed these serious allegations. The government, however, denies.

Elections in Somalia are generally marred by serious electoral violations, including bribes, intimidation and under the table deals. Cases of political assassinations are also. No wonder the MPs were each given loaded pistols for their personal safety.

The government seems determined to make sure its candidate takes over by hook or crook. It is, therefore, not surprising to hear that a hefty bribe was offered to the South West Election Coordination Committee to lock out Robow from contesting by declaring him unfit to run for public office because of his past criminal association with al Shabaab. This comes even after Robow surrendered to the government several years after quitting and the US lifting a ban on him.

On November 6, the 15 election officials resigned citing government interference. This prompted the election to be rescheduled twice to December 5 and a new team picked to oversee the election.

Another indicator of the huge government interest in South West State was clearly manifested sometimes in early October when the Ministry of Interior issued a statement blocking Robow from contesting because of what they termed as lack of international clearance.

The blatant government interference and use of public resources to sway the outcome of vote has received widespread condemnation across Somalia, including the Senate, South West State Council of Elders and other civil society members.

So, why is the central government so determined to win this particular election? This is a question that needs to be understood.

The central government wants to flex its muscles and control power in Somalia ahead of the 2020 election. The South West State election simply happens to be the first pawn in this power struggle.

It is worth noting that elections in Jubaland and Puntland are also round the corner. The government wants to test the waters in South West State and if they win, it will rejuvenate their plans to finance their own puppets in Garowe and Kismayu.

Robow is their biggest headache. This is why the government has gone out of its way to make the road impassable for him and somehow curtail his ascendency into power.

In the next episode of Soomal column on December 8, three days after the South West State Election, we will have a special edition on the outcome of the election and what happened behind the scene to influence whoever emerges the winner should there be a free and fair election.