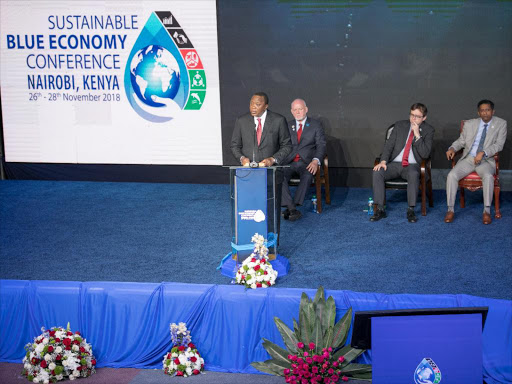 For three days, political leaders and representatives of the private sector, the civil society and the scientific community from around the globe met in Nairobi to discuss the perspectives and potentialities of a sustainable blue economy. This is the whole scope of human activities on and around oceans, rivers and lakes, and their impacts on development and the health of our planet.

Oceans, rivers, lakes, coast, mangroves and seabed are critical elements of our environment, which we massively and ever increasingly rely on: Ocean-based industries contribute roughly $1.5 trillion to the global economy, with fisheries and aquaculture supporting the livelihoods of 12 per cent of the global population, without mentioning tourism. About 2.8 billion people live less than 100 kilometers from a coast. Yet, a growing number of ecosystems and species are endangered by pollution, overfishing, destruction of habitats and climate change.

This is where scientists have a major role to play. By understanding the subtle mechanisms by which all this is interrelated, they help us identify the threats and limits to avoid irreversible disasters. Joining forces with political authorities, the private sector and the populations, they are key players in framing the sustainable blue economy.

Their mobilisation and catalyzing action have already produced results on the global stage. In 2015, the “Conserve and sustainably use the oceans, seas, and marine resources” Sustainable Development Goal (SDG 14) was adopted, followed by the creation of the Oceans and Climate Platform during COP21 in Paris. In June last year, the first United Nations Conference Ocean Conference adopted nine Communities of Ocean Action to support and monitor the implementation of SDG 14.

Land-based plastic pollution in the oceans has finally made its way at the forefront of the international agenda, and the United Nations Environment Programme is working on a comprehensive Ocean Strategy. Oceanologists and other specialists of marine habitats also greatly contribute to the work of the Intergovernmental Panel on Climate Change and the Intergovernmental Platform on Biodiversity and Ecosystem Services. The scientific community has helped consolidate an international legal order of the environment, especially through the Multilateral Environment Agreements and the Regional Seas conventions.

Looking ahead to the next UN Ocean Conference in 2020 in Lisbon, the Nairobi conference gives the world another crucial and timely opportunity to hear the scientists’ voices on what it takes to build a truly sustainable blue economy. Hence, France is grateful to the University of Nairobi and the Kenyan government for mobilising many high-level participants for the Science and Research Symposium. The upcoming One Planet Summit, in Nairobi in March 2019, will build on the findings of the Nairobi conference to move even more forward down the sustainable blue economy path, with a focus on concrete action in Africa.

Sustainable blue economy is dealt with at a multilateral level for a reason: Oceans, rivers and biodiversity do not recognise borders, and joining forces is the only way to achieve anything. Science makes no exception in this regard. France bets on multinational and multidisciplinary teams and coalitions of scientists to produce and promote state-of-the-art knowledge. Indeed, all the French scientists at the Nairobi conference belong to multinational teams working on multinational projects: The PADDLE Consortium, working on more inclusive marine spatial planning, production and ocean governance models, is funded by the European Union and gathers partners from France, Portugal, Germany, Senegal, Brazil and Cape Verde, the whole being coordinated by a French scientist from the Research and Development Institute, Dr Marie Bonnin.

Closer to Nairobi, researchers from Kenya, Tanzania, Mozambique Madagascar and Vietnam are members of the West Indian Ocean Delta Exchange and Research Network, supported by the French and Canadian research, and focussing on socio-ecosystems and landscape transformations in river deltas. Another example is the West Indian Ocean Marine Science Association, currently presided by a senior Kenyan scientist of the Kenyan Marine and Fisheries Research Institute, Dr Jacqueline Uku, in partnership with IRD at La Réunion Island.

Present in all three oceans, a member of all six Regional Seas conventions and strong of the world’s second largest Exclusive Economic Zone (EEZ, 11 000 000 Km²), France has systematically advocated in the international fora to expand existing marine protected areas and create new ones. Marine protected areas cover 22 per cent of the French territorial waters, including the largest in the world in New Caledonia (1 300 000 Km²).

With a sense of urgency, France also advocates for the protection of endangered species such as whales, the fight against plastic pollution in the oceans and the preservation and restoration of coral reefs and mangroves. Recently it has been actively involved, along with the EU, in putting together a new international instrument to protect biodiversity in the high seas, in the context of the UN Convention on the Law of the Sea.

Our water bodies are essential elements of the environment in which we live, build and thrive. Scientists are firsthand witnesses of their functioning and benefits, but also of the damages uncontrolled human action can produce on them and, ultimately, back on us. It is therefore their duty to alert us on those threats. But it is our collective responsibility to lend them a careful ear, and then take proper action.