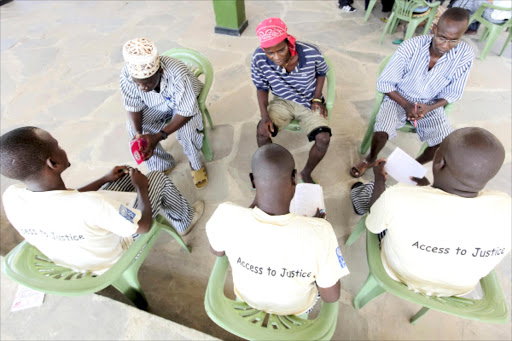 Recent Katiba Corner articles have shown how hard it is for ordinary Kenyans to have the services of lawyers, even when facing serious criminal charges.

Lawyers are few, with most being located in urban centres, while the law and its procedures are complicated, the laws inaccessible and court houses and police stations few. Mfangano Island in Homa Bay county, for example, has no court and people have to cross by boat at a cost of Sh50 (two hours one way) to manage their cases in Mbita (mainland). More than 48 per cent of Kenyans live on less than Sh95 a day, and therefore cannot access legal services nor effectively manage their court cases due to high legal and court costs and legal illiteracy.

Paralegals may be employed as assistants to lawyers, or do other limited but lawyer-like work. There is a paralegal movement aimed at providing legal advice, assistance and support services that are relevant and practical especially in remote or otherwise marginalised areas (like slums) that have high levels of indigent, legally unsophisticated and vulnerable populations. These paralegals usually provide their services for free.

There are more than 3,000 paralegals in Kenya working in the community, prisons, police stations, courts and other state, private and civil society agencies – a remarkable figure when you consider the number of lawyers supposed to be in practice (according to the Law Society, about 6,500).

What do paralegals do?

Administrators like chiefs have incorporated paralegals into the councils of elders where disputes are resolved. Sometimes, chiefs have asked to be trained as paralegals or paralegals have been employed as assistant chiefs.

Correctional services, like Probation and Aftercare, have included paralegals in the Case Management and Anti-Corruption Committees to assist vulnerable persons in detention, in community reintegration and welfare support. The Kenya Prisons Service has paralegals stationed inside prisons and remand homes daily, and are part of the Parole Boards. Prison paralegals provide legal education for self-representation of the inmates, monitor human rights, follow up cases at police stations and courts, inform and assist family members on case progress and procedures like bail process, inmates’ medical issues, or simply helping to reestablish contact with a loved one. Some prisoners have also been trained as paralegals to help fellow inmates.

The judiciary has collaborated with prison paralegals during visits to prisons where paralegals have raised with the judiciary issues about delays, bail terms and those related to children (who are sometimes held in the same cell as adults due to congestion in prison). The judiciary has also worked with paralegals on judicial open days, and incorporated them in Court Users Committees, which bring together state agencies relating to prisons, probation and children, the police and non-state agencies including the Law Society of Kenya and civil society to reach practical solutions to problems in the administration of justice. Some CUCs, working with paralegals, have been able to reach out to communities through public education, and to improve the management of cases and prisoners.

The judiciary has also cooperated with paralegals in establishing customer care desks to give advice to court users (litigants, witnesses, complainants, accused) and the general public, and following up cases with the court registry or lawyers. This has improved the judiciary-public relations, and reduced bureaucracy, and corruption.

How are paralegals organised and trained?

A number of civil society and faith based organisations, including the Catholic Justice and Peace Commissions, Kituo cha Sheria, Legal Resources Foundation, International Federation of Lawyers, GROOTS Kenya, Muslims for Human Rights (MUHURI) have trained and organised paralegals. Paralegal Support Network (PASUNE) has established a six to seven week curriculum with a special focus on law and procedure, advocacy and community mobilisation skills, and includes practical visits to courts, prisons and police stations, and community forums for legal aid clinics and civic education.

Private universities and colleges, and recently the Kenya School of Law, have also developed paralegal training curriculums, but for those who will work in government institutions, especially courts, and law firms.

Paralegals and the 2010 Constitution

Article 49(1) (c) provides that an arrested person has a right ‘to communicate with an advocate, and other persons whose assistance is necessary’. Many paralegals as “other persons” at the police stations have assisted in bail or bond requests, obtaining copies of occurrence book records or recording complaints against the police officers. However, many police officers prefer interacting with lawyers.

Secondly, Article 50(7) provides that ‘in the interest of justice, a court may allow an intermediary to assist a complainant or an accused person to communicate with the court’. Previously, intermediaries have been used in the less formal children’s courts and now are beginning to be used more widely. In Kisii, a prison paralegal intervened in a High Court case where a ‘young man’ (whom the paralegal had encountered in prison) was charged with robbery with violence. The paralegal brought to the court’s attention that the accused was not only a minor but deaf, and did not understand sign language. The court immediately ordered an age assessment, the services of a sign language interpreter and ensured that the trial was conducted in a child-friendly manner.

What is the future of paralegals?

There is a draft legal aid and awareness policy, and a draft Legal Aid Bill. The latter provides for an accused person or litigant 'to be advised and assisted' by an intermediary for free especially where government legal aid services are not accessible. This means that this sort of service can be offered only by organisations that are funded – or by individuals prepared to work without pay.

In the Judicial Transformation Framework, the judiciary plans to establish special courts to handle minor criminal offences, and for small civil claims. These may also give an opportunity for paralegals to play a role as intermediaries or even arbitrators, with some further specialised training. These courts will be located at the ward level. Paralegals are already involved in dispute resolution (on their own or with chiefs or elders) of minor civil or criminal disputes where they invoke both elements of common law and traditional rules.

Article 159(2)(c) says that alternative dispute resolutions including mediation, reconciliation and traditional dispute resolution mechanisms are to be promoted. Especially in traditional forums, there will be need for specialised training for those involved especially in the principles of human rights, natural justice, and the rule of law. Paralegals could play a critical roles in these bodies as elders where eligible, as mediators, trainers, documentation clerks, and monitor the management of these mechanism and provide legal awareness in the community about their jurisdiction.

Paralegals should not be viewed as ‘poor lawyers for poor people’. They are justice enablers who are often more attuned to the ordinary citizen than lawyers, more approachable and practical, and very knowledgeable in the areas of law that are important to citizens.

The authors are respectively a Commissioner with the Kenya National Commission on Human Rights (KNCHR) and a former County Paralegal based in West Pokot County with Legal Resources Foundation (LRF). This article was edited by Jill Cottrell Ghai from a much longer chapter by the authors in The Legal Profession and the New Constitutional Order in Kenya, published by the International Commission of Jurists Kenya in 2014.