Obama's trip to Kenya: Why is he coming? 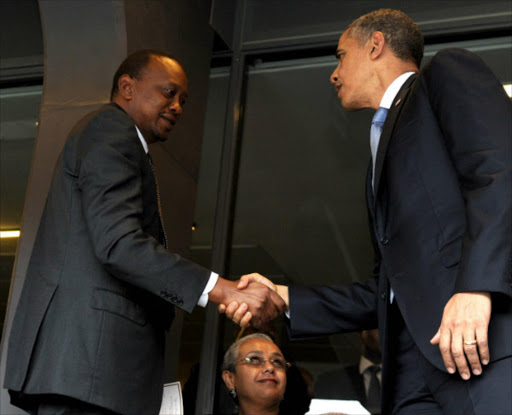 What is the basic idea behind President Barack Obama’s trip to Kenya in the final week of July? There is no crisis in this part of the world and a US Presidential visit is a complex process, planned at least a year in advance.

According to the White House Press Office, the visit to Kenya will be President Obama’s fourth trip to sub-Saharan Africa during his presidency.

US presidential visits are invariably linked to certain things that the Americans want. There is an odd coincidence therefore with President Kenyatta’s massive anti-graft drive and the Obama visit. There are suspicions in some quarters that the State Department may well have pegged President Obama’s visit to his Dad’s homeland to a large anti-corruption gesture, knowing all along that an unprecedented and irreversible action cannot fail but make China, for instance, look bad.

A year ago today, a US Presidential trip to Kenya was definitely not on the cards. For one thing, President Uhuru Kenyatta’s crimes-against-humanity case at the International Criminal Court was still on, with the prosecution giving every signal, as prosecutions the world over are wont to, of having quite a few aces up its sleeve. Eventually, it turned out that Fatou Bensouda was running on empty and the case collapsed.

In April 2015, the Western liberal democracy leaders were still giving Uhuru a wide berth and avoiding both he and Deputy President William Ruto, who had, and still has, a separate case at The Hague arising from the same 2007-08 post-election violence crisis.

In June of the previous year, Uhuru was invited to a British-sponsored international conference on Somalia in London, his first visit to the UK as President. But Prime Minister David Cameron’s handlers contrived to organize the visit in such a way that Cameron and Uhuru never appeared in the same picture frame. The Somali delegation was feted like the builders of Singapore (in contrast to the frosty reception accorded to the Kenyans) instead of representatives of the world’s most failed nation.

The Kenyans, who apparently forgot to take their own official photographers in the rush and excitement of suddenly being invited to London, were deeply humiliated.

Many other countries would dearly like to host Obama just now and his decision to finally come to Kenya sends a clear message to investors and tourists everywhere, adverse travel advisories from both Washington and London notwithstanding.

When the 44th President of the United States and the first Black man to hold that office meets the Fourth President of Kenya, son of Founding President Jomo Kenyatta, in Nairobi on July 23, 2015, the trip will no doubt have long before been spun by the Kenyan media and political class as Obama’s “homecoming”, in the peculiarly Kenyan sense of this phrase.

For older folk, there will be much resonance and symbolism in the very act of a Luo-American President of the USA 9as he will be styled by the political wags) shaking hands at JKIA with a Kenyan President who is a son of Jomo in the month of July. Forty-six years ago, on July 5, 1969, Thomas Joseph Mboya, 39, a Luo, was assassinated in one of many subsequent attempts to ensure that a man from Luo Nyanza would not become President of Kenya. Mboya was a friend of the Kennedys who ultimately suffered their fate – death by so-called lone-nut assassin.

The Kikuyu political elite’s treatment of Mboya and, not long thereafter, the Jaramogi Oginga Odinga, whose party KPU was banned and who served an 18-month detention-without-trial stint, built up a reservoir of resentment that spilled over into the 21st century.

The Mwai Kibaki Presidency of 2002-13 was viewed by elites on both sides of the political divide as yet more prolonged prevention of a Luo ascendancy to State House and more laying of the ground for an extended Kikuyu stay in power.

Obama and Uhuru were born in 1961, the American in April, the Kenyan in October, and are left-handed. They are 54 this year. The American is in the lame-duck phase of a two-term Presidency and Uhuru has begun the second part of his first of what he hopes will be two full terms.

Obama’s visit will be the first time the two encounter each other as presidents on Kenyan soil.

Uhuru will still be President after Obama leaves the White House on January 20, 2017, but face a General Election later the same year. Uhuru’s most determined opponent in that race may well be former Prime Minister Raila Odinga, son of the Jaramogi.

When President Obama lands in Kenya and “brings the American flag with him” the chests that will swell with the utmost pride will be those of the Luo Nyanza electorate, who believe that deserving Luo candidates and prospective candidates have always been prevented from claiming what is rightfully theirs by the “Other Side”.

In Raila, the Luo electorate – and they are not alone on this one – sincerely believe they have a man whose Presidential victory has been robbed not once but twice in a row (by Mwai Kibaki in 2007, followed by the PEV crisis and the Grand Coalition compromise regime and Uhuru in 2013, followed by the epic petition case in the Supreme Court).

When the son of the Jaramogi shakes the hand of the son of the late Barrack Obama Snr on Kenyan soil in July, the earth will move under the feet of the Luo electorate. No speech of Obama’s has been listened to more keenly, or mined for unspoken meanings and implications more enthusiastically anywhere else on earth, than the speech the US President will make if his itinerary includes addressing a gathering or two in Luo Nyanza.

Even if Obama does not go to Luo Nyanza this time, he made that trip in 2006 as a senator and greatly boosted his inaugural presidential campaign thereby. Obama’s just one-generation-removed Kenyan roots and his memoir Dreams from My Father: A Story of Race and Inheritance added tremendously to his political brand on his way to the White House.

His homecoming towards the end of his epoch-making presidency will be above all a world media event – perhaps even more so than his 2006 senatorial safari.

For Kenya and the Kenyatta administration, on the rebound from 2014’s horrible year of the death of an entire tourism high season, the focus on Kenya that will come with Obama’s visit will be most welcome.

The $64 million dollar question is whether the Kenyatta administration Brand Kenya publicity machine and all its spin-doctors and photojournalists are primed and ready to make a golden harvest of Obama’s last roadshow in Kenya.