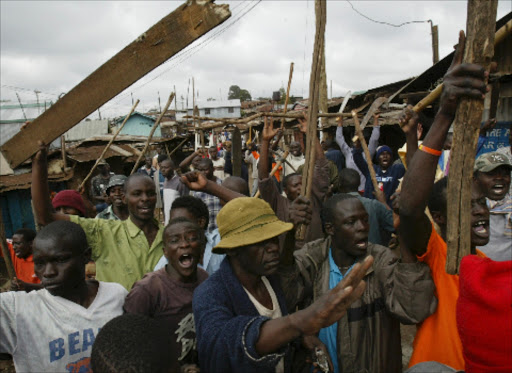 The party nomination exercises were every bit as messy as expected; and the howls of outrage by the losers who cried foul, were as loud as had been foreseen. Clearly Kenya has a long way to go in embracing internal party democracy.

But there is more to this, than a few party leaders allegedly helping rig in their friends or relations. Once a nation starts going down the path where election irregularities and election violence, are considered to be in some way "normal", this path often ends up in even greater violence when the General Election arrives.

This is the warning implicit in this extract from the AfriCommons blog, written by an American who was an official observer during the 2007 General Elections.

A key indicator of major Kenyan general election problems ahead that was downplayed in 2007 was the magnitude of problems in the party nominations process.

All of us who were involved in supporting and watching the process were aware from our own experiences and from the Kenyan media that things were messy. As it turned out, the US, at least, conducted a more systematic observation of the primaries and saw a lot of things that would have raised more red flags for the rest of us had anything been said publicly (or even shared privately with others working election observations).

Through my 2009 Freedom Of Information Act (FOIA) request for documents from the State Department on the Embassy’s own 2007 election observation endeavor, I was provided in addition to a minimal amount of information on the general election observation a copy of an e-mail about the primaries, especially noteworthy regarding the role of the ECK, as well as hate literature, and the overall mess:

The one document released that substantively describes observation of voting by State Department personnel is a November 20, 2007 e-mail which is a headquarters “readout” of a video conference held “with Post to discuss the experiences of Post’s first-ever observation of the political primary process in Kenya.”: Here is the text:

*21 teams (total about 60 people) deployed to the field. This is our first time observing the primaries. We expect to deploy about 50 (100+ people) teams to the general elections as part of the larger international observer effort. The EU plans to deploy 150 people.

*These will be Kenya’s 4th multi-party elections but only the second “free and fair”.

*The process was very poorly organised. We would say the the parties embarrassed themselves, except most of the party leaders have no shame and are thus immune from embarrassment. General feeling is that apparent total lack of organisation is not an accident, but reflects efforts to rig/manipulate the outcomes.

*There were obvious deals between the incumbents and local party operatives.

*The process was well-run and by the book only in where parties had no hope of winning in that area anyway. Where there were real stakes, manipulation was rampant and obvious.

*Ballots were delayed for many hours in many locations; some politicians felt this was intentional and especially disenfranchised women voters, who either couldn’t wait all day or had to go home before dark for safety reasons.

*Turnout was surprisingly good. People were very determined to vote. Many waited from 6am to 3pm or later for ballots to arrive. In some cases where ballots were delayed, people agreed amongst themselves to vote on whatever pieces of paper and honoured the results.

*Dozens of outgoing MPs (including some we are very happy to see go, ie [REDACTED] were eliminated at this stage, which suggests that you can’t always manipulate the results.

*Our sample was biased as we purposely went to areas where trouble was expected and/or stakes were high, so we likely observed a disproportionate amount of rigging, etc.

*With the recent passage of the Political Parties Bill, this is the last time that the party nomination process will be run by the parties themselves. In the future, the Electoral Commission of Kenya (ECK) will run it (at least, for all parties who want public money). PNU contracted with the ECK to run their primary this time, but it didn’t happen in practice–party leaders took over and wouldn’t let ECK do its job.

*We expect a lot of horse trading. Some winners were DQed on appeal and even without an appeal. There were also many “directed nominations”, which led to the resuscitation and handpicking of many old dinosaurs/unpopular incumbents notwithstanding voter opposition.

*There may be blow-back with an impact on turnout for December 27. There were widespread feelings of bitterness and disappointment, especially among ODM supporters, who expected to participate in a “new beginning.” Many people complained that, populist image notwithstanding, ODM is run like a dictatorship and that the way of doing things is no different than Kanu used to do in the past. The positive difference is that the electorate is much more vocal and active in demanding transparency and participation in the electoral process. The howls of protest regarding some of the directed nominations show the electorate’s increasing maturity and lack of interest in this kind of politics.

*Many unsuccessful candidates have jumped to smaller/marginal parties. There is a cottage industry of sorts selling nominations.

*The disappointment and frustration with the nominating process was greatest among ODM supporters. Will this experience sap the energy of ODM supporters, or can ODM redeem itself? Will people continue to be willing to take a chance on an unknown quantity?

*Fear/stability is a powerful motivating factor in Kibaki’s re-election prospects. The contest between ODM and PNU can be characterised as “hope vs fear.”

*PNU has much less internal discipline and message consistency. Virtually all PNU parties are fielding their own candidates for parliamentary seats, so not much of a real coalition.

*Two possible types. One, aspirant (often incumbent) MPs use paid gangsters (and sometimes local police officials) to intimidate or disrupt the polling process (trash polling stations, threaten voters waiting in line and/or election officials). Two, spontaneous voter uprisings, where voters feel they are being disenfranchised and attach the presiding officers. If the ECK runs an efficient process as expected, this should lessen the possibility of voter violence.

For context, this November 20, 2007 summary of what was observed during the primary election was roughly a month after the Ambassador’s intervention in the public opinion polling as described in previous documents and a month before the Ambassador’s public statement predicting a “free and fair” election the week before the general election. Nairobi is the State Department’s biggest Sub-Saharan post; it was staffed with smart and observant people and obviously well funded–the problem was not what the State Department didn’t know, rather it was what it wouldn’t say.

Ken Flottman is an American lawyer who managed International Republican Institute's 2007-08 election observation as East Africa Director in Nairobi. This article was posted on January 14, 2013.