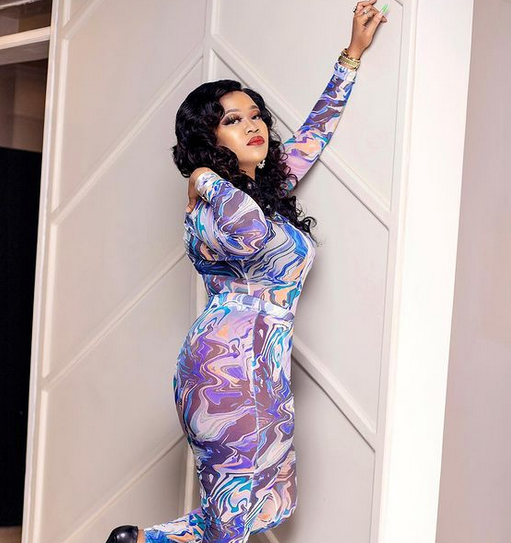 Socialite Vera Sidika has revealed a new body, alleging that she underwent surgery, but critics see it as a prank.

In an update, Sidika said the move was pushed by a health risk she was facing.

The mother of one went on to name her transformation 'The Rebirth,' flaunting a newly acquired shape.

"It’s still very unbelievable but I’ve come to terms with it and learnt to love myself regardless," she wrote.

She went on so explain she was not okay and that is why she did not celebrate her birthday this year.

"I’m lucky to be alive, God loves me so much. Honestly, it’s been pretty hard. I’ve come to appreciate life and never take things for granted."

She thanked her family and her husband for being there for her. "I am still the same sweetest Vera Sidika and that hasn’t changed," she wrote, promising to share her surgery journey videos on social media.

Her fans think she is not honest as she had in the past pulled another prank on them by suggesting she had changed her skin colour to black.

At the time, she wrote, "Never be defined by your past. It was just a lesson, not a life sentence. Feels good to be back! Black don’t crack."

A fan identified as barbie_shii wrote, "The other time you also lied to us. We know you Vera and this is all lies."

winnie_ronno said she had used photoshop.

Some also guessed the socialite is promoting an upcoming project.

If you are going to get your breasts enlarged, then do it right, is Vera Sidika's opinion. She was commenting on June Wanza, who died at Nairobi ...
Sasa
4 years ago

Vera planning for another boob surgery

She will go for it once she is done with breastfeeding
Sasa
10 months ago
Post a comment
WATCH: The latest videos from the Star
by ELIZABETH NGIGI Lifestyle, Entertainment Journalist
Word Is
06 October 2022 - 00:00
Read The E-Paper