Gloria Muliro's ex says she was not submissive 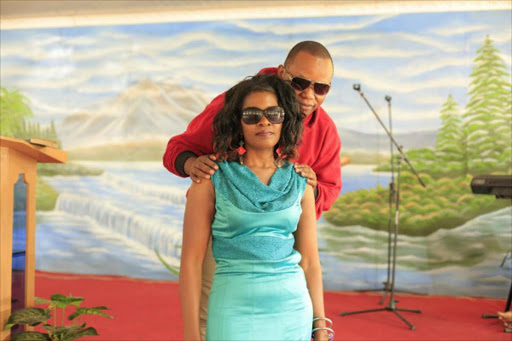 Gloria Muliro's ex-husband Prophet Eric Omba says the singer did not give him a chance to work on their marriage.

Speaking to NTV on Saturday, he said he was willing to reconcile with Gloria but evil forces kept blocking his marriage.

"There were some spiritual issues and altars that prevented that," he said.

Omba said the generation curses came from Muliro's side.

"You have seen situations where, for example, a father was a thief, and you find the children also end up being things like their father," he said.

"The example the parents set for their children was bad, thus blocking blessings.

"So there is a possibility that in our situation with Gloria Muliro, I was willing to apologise and seek out a reconciliation, but her family altars and generational curses could not allow her to stay in one marriage, you will have to go to another one."

The two have since moved on as Gloria got married recently and Omba also has children with his new wife.

Omba was asked why he did not stand in the gap and pray for his marriage. He said as a couple, they both needed to accept that they had baggage and demons.

"I have to agree that yes, I also had baggage and demons as well, that is a given," he said.

"But at the end of the day, the two of us had to agree and work at it. But my partner did not accept. I accepted my wrongdoing."

Omba also alleged that Muliro was not submissive.

"You cannot live with someone who doesn't submit, that is why they leave. When they leave now they start fighting you properly when they are out there. They start asking for money."

Gloria is currently based in the US with her new husband, Evans Sabwami.

In a past interview, Gloria alleged that Omba was abusive and unfaithful, something he denied vehemently.

days after holding another ceremony in Eldoret
Sasa
9 months ago

Omba said Gloria relied on rumours from her friends denies cheating on singer.
Sasa
2 years ago

Murilo: Beautiful to love, be loved

Gospel singer is set to wed again five years after divorce
Sasa
1 year ago
FELGONAH OYUGA: Sex with you is not the answer
by ELIZABETH NGIGI Lifestyle, Entertainment Journalist
Word Is
30 May 2022 - 00:00