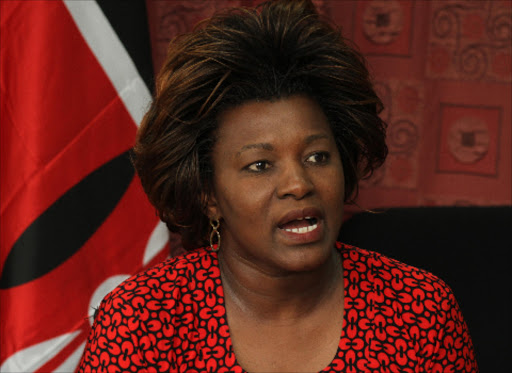 Speaking on Churchill Show's 'Journey Series', the Gender CAS said she was depressed for a whole year while serving as the women representative.

"I disappeared for a year and people were asking where I had gone to. And even when I came back, most people thought I was coming to ask for votes," she said, adding that she could not explain that she had been unwell for so many months.

"It affected my family, broke a lot of my relationships. It caused my political visibility to reduce and also took a toll on my health."

When asked if it was the same time she had a problem with former Nairobi Governor Evans Kidero, Shebesh said that was a big trigger. "When you have bipolar, you can get triggers from anything," she said.

"I was triggered by so many things and at the time, I had not learnt how to deal with my triggers."

In September 2013, the two engaged in a heated verbal exchange outside Kidero's office.

Shebesh had confronted Kidero about county employees’ strike over unpaid salaries, which had paralysed operations.

The argument ended up with Kidero slapping the woman representative. Shebesh told Churchill that since it was all over the public, she was not able to deal with the cyberbullying and embarrassment.

Senator denies he nearly killed her, says she has bipolar disorder
Sasa
6 months ago

"It was a lot of pressure. It was the most difficult depression I have ever gone through," she said, adding that she settled with him and closed that chapter.

"We are at peace. To me, it is just an incident that happened in my life and I have moved on with it."

In a radio interview last month, Shebesh said that she was paid close to Sh30 million by the former Nairobi Governor Evans Kidero, adding that the payment was an out-of-court settlement.

Shebesh has been openly speaking about how she has been dealing with bilpolar.

She said coming out to speak about it has not been easy.

"If you don't have a strong support around you, you might collapse. If I did not have someone around me and they understand what I was going through, I would have collapsed," she said.

"Cyberbullying is heavy. I was reading on social media, newspapers and everywhere, wondering when all this was coming to an end."

She cannot use drugs like weed or mingle with people who stress her
Sasa
3 months ago
Media gagging in high-profile cases
by ELIZABETH NGIGI Lifestyle, Entertainment Journalist
Word Is
17 August 2021 - 05:25