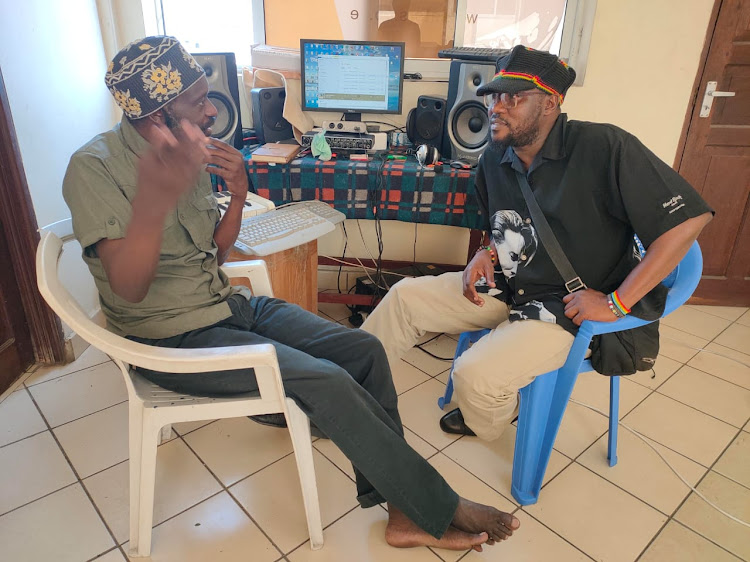 Lolani Kalu with a friend in his studio
Image: Courtesy

Former NTV journalist Lolani Kalu has thanked his fans for helping him when he needed help last year.

His plight was highlighted on Twitter and Jalang’o invited him for an interview where he asked his fans to support the veteran journalist.

This got the former NTV reporter emotional and he shed tears in the middle of the interview.

Lolani is back on his feet and has opened a music recording studio.

Speaking to Word Is, Lolani thanked all those who supported him.

"As of now, I have a recording studio, a camera to do my recordings and to also go live with," he said.

Lolani said he has recorded some songs.

"I have written a music theory book in Swahili titled Mawe Saba and I would like to request the Ministry of Education to have it in schools for music lessons.

"I also have another song speaking about the importance of being united as a country. I also ask them to subscribe to my YouTube channel, Lolani Media, so I can start earning from the site."

Tahidi High's Omosh cries for help with rent and job

He is under the strain of 100k rent dues, two wives and five kids
Sasa
5 months ago

Says it's been blown out of proportion.
Sasa
3 weeks ago
by ELIZABETH NGIGI Lifestyle, Entertainment Journalist
Word Is
01 July 2021 - 00:00