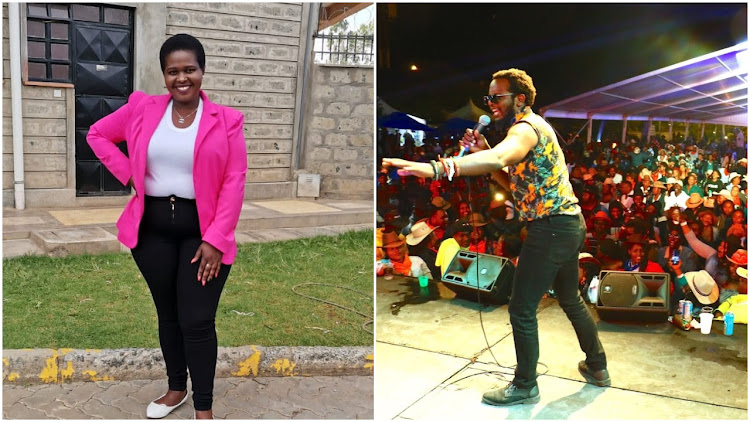 Churchill show comedienne Jemutai on Tuesday announced that the DNA results of her two children are out.

According to her Instagram post, there was a 99.9 per cent match between her children and her counterpart comedian Prof Hamo.

A DNA test on her two children was conducted at the Kenya Medical Research Institute after a request by Prof Hamo.

The two reached this decision following a heated exchange of words online after Jemutai accused Hamo of not taking care of his two children.

Through Churchill’s intervention, Prof Hamo agreed to pay the children’s school fees while they waited for the DNA results.

Jemutai told blogger Edgar Obare, "Hamo and his brother, we were at Big Square on Wednesday. We met on Monday with Churchill and a few guys to try and sort out issues."

Adding, "We are still sorting out issues. At the meeting, he agreed to pay for the school fees, so tulimeet on Wednesday as agreed and he gave me the school fees nkalipa jana… the DNA will be out in two weeks."

Before their reconciliation, the mother of two said Hamo had rejected her and her children and that she is in a financial crisis, seeking help. She was selling her Facebook account to start a business and take care of her kids.

Jemutai further said the father of her children in one instant became violent to her after arriving home drunk.

In his defence, Hamo put out a statement on Instagram, saying he has been providing for his children since day one and there is no day they went without the basic needs.

"I have been providing for my children from day one and there’s no day they went without food or shelter or anything they need. My wife is the one who sends upkeep for the children who don’t live with us. This has been the agreement between my family and the mother of the children."

He did not tell her he was married and kept wife in the dark, she says
Sasa
1 year ago
Single mums ‘pandemic’: Where are the fathers?
by ELIZABETH NGIGI Lifestyle, Entertainment Journalist
Word Is
13 May 2021 - 00:05