Winnie Odinga: I was bullied by teachers 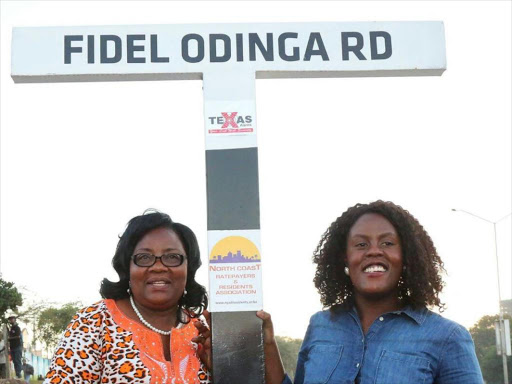 Ida Odinga and Winnie Odinga stand next to the road sign in Nyali, Mombasa. The road was named after the late Fidel Odinga
Image: FILE

Winnie Odinga, the lastborn daughter of Opposition leader Raila and Ida Odinga, says she was bullied in school.

Speaking on Radio Jambo, Winnie said life has not been easy for the family.

"First, we were refugees during former President Moi's era, we kept moving all the time, from Norway to Germany, to Denmark," she said.

"Then later we came back to Kenya and even here, some teachers had problems with my dad, and this came to me and I used to be bullied by teachers."

Winnie added that her late brother Fidel was the one who requested her parents for her to be transferred to another school.

"That is how I went to Brookhouse School," she said.

Winnie added that although there are good people, she has learnt not to trust any.

Asked if she is dating, Winnie laughed, saying the problem with men is they want to plan your life.

"I do not want anyone to plan my life as I like doing my things. Most men like planning your life and I have had a bad experience with love," she said.

"My job is being in politics and in Kenya, politics is done at night in the clubs, at homes. See someone like Kamala Harris, Vice President of the United States, got married at 49 years after she got someone who can support her."

Speaking about losing her late brother Fidel, Winnie said it was a difficult time for the family and her as Fidel was to pay her fees as she planned to pursue a Master's degree at USIU. Only for Fidel to die before her enrolment date.

"I didn’t have money, so I went to Fidel, and he agreed to pay the school fees. I was to join the school in the second week of January but unfortunately, he died on January 4," she said.

"I was wondering what I would do and so I had to talk to my sister and she agreed to pay. I was close to Fidel but thank God I am on good terms with all the family members."