Witchcraft and music: The bad romance in showbiz 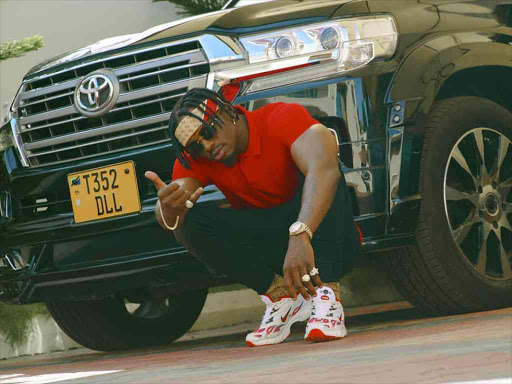 Witchcraft and music have had a long relationship in pop culture in East Africa. To be rich and famous, some youths have sought help from the occult.

To be young and beautiful, some say, you have to seek dark powers to compel your suitors to obey your every command.

Some of East Africa's top personalities have admitted, without shame, that they sought the powers of a mganga to give them that supernatural push.

Artistes, socialites, footballers, business people and surprisingly even thugs, are some of the groups that are known to get into this lifestyle.

Even though many do it on the low key, others have admitted to using uganga to catalyse their craft.

Some of the celebrities that we will be looking at include gospel singer Sarkozi, bongo star Diamond Platnumz, his sister Esma Platnumz, Hamisa Mobetto and Darassa.

Gospel singer Rigan Sarkozi’s life history is an inspiring yet scary one altogether.

In an interview on Radio Jambo, the man who rose to fame thanks to his ‘Wewe ni Mungu’ hit song featuring Daddy Owen, shocked many when he revealed that he once resorted to witchcraft and drug dealing to survive.

Opening up on his controversial past, Sarkozi said his spirit convinced him to speak out on how he turned to the same God he was fighting in search for prosperity.

"As a Christian and a human being, I got saved in 2011, and since then, I haven’t spoken about this (practising witchcraft)," he said.

"I did not wake up just one morning and get saved. I have been involved in theft cases, witchcraft, among others. I would come into your house and steal your TV set and leave, only for you to realise it hours later."

He said it all started with the company he kept in the past. His friends were into women and the partying life, and since their parents would never give them money for such, they resorted to stealing household items.

Sarkozi decided to change his ways for good upon receiving a call from his mother, who dreamt that her son had died.

It is at that point that he fled Tanzania with the little he had and came back to Kenya, where he grew up, and decided to give his life to Christ, despite being as drunk as a fiddler back in 2011.

The news that Hamisa had gone to a witchdoctor to bewitch Diamond raised eyebrows. When Hamisa came to Kenya, she said she had gone to seek spiritual guidance and not witchcraft.

Diamond had spoken about it on his TV station, Wasafi TV, saying she had gone to seek a witchdoctor’s help to secure Diamond’s love.

He called out his baby mama, Hamisa Mobetto, for seeking the services of witchdoctors to compel him to marry her.

"You have gone to witch doctors wishing harm against my family. That means you could kill my mum and here you are asking that i buy you a house," he wrote.

"What you are doing is not right. You should focus on your businesses and your work, instead of going to the witchdoctors to charm me into marrying you."

In his song, featuring Navy Kenzo called 'Katika', Diamond admits it actually worked on him. He confessed this saying: "Tunguli zimenibamba, Mobetto."

Tanzanian rapper Darassa hit the headlines with his hit song Muziki, featuring Ben Pol. He later said he sought the services of a witch doctor at one point in his life.

Darassa, however, said it was long ago, and he did not go to seek black magic powers over his music but for personal issues.

Joseph Mayanja, popularly known as Jose Chameleone, is arguably the best musician in the East African region. Having stayed in the music industry for 16 years, Chameleone has managed to become one of the most-sought-after artistes around, despite many peers fading into insignificance.

Known for hit songs such as Wale Wale, Nkoleki, Vale Vale, Dorotia, Tubonge, Agatako and Pam Pam, Chameleone’s music has always dominated both the local and international airwaves, a clear indication that he is creative and talented.

Well, of late, Chameleone has been accused of using black magic to gain fame and popularity. He recently refuted the claims in an exclusive interview with Mpasho.

Chameleone said there are people out there trying to tarnish his name. He said he is a believer in Christ and that’s why he has risen from grass to grace. He further said, "Witchcraft is nonsense."

Jose Chameleone is the elder brother of Ugandan singers Palaso, Weasel and the late AK 47.

Diamond Platnumz and Ommy Dimpoz have recently been exchanging unkind words on social media, amid a series of misunderstandings between them. In the past, Ommy Dimpoz claimed that Diamond was using witchcraft to promote his music.

Esma Khan is Diamond Platnumz’s sister. She said she does seek witchcraft to protect and grow her business.

In an interview with a Tanzanian based website, the celebrity sister said she is not afraid to confess to this dark secret.

Esma owns a business in Tanzania, where she sells vitenge and beauty products.

Twenty-three Ugandan radio stations were closed mid this year for trying to promote what the authorities called ‘uchawi’ (witchcraft) by conning people of their money.

According to reports, the radio stations were inviting people to talk on air who claimed to be medical miracle workers.

The Uganda Communications Commission spokeswoman was quoted as saying:

"The radios have been promoting witchcraft. People claimed on these radios to cure diseases like Aids and cancer, These people have been fraudulently getting money from the public," she said.

Uganda has about 292 radio stations, and most self-proclaimed prophets and traditional doctors use some of these stations, claiming to heal diseases.