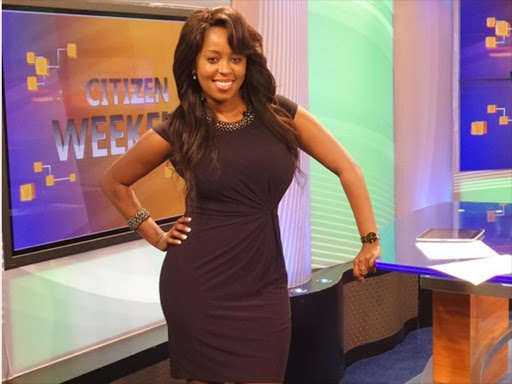 Citizen TV news anchor Lilian Muli. Photo/COURTESY
News anchor Lillian Muli has called out the father of her second child, Jared Ombongi for being a serial polygamist.
In an angry rant, Lillian revealed that Jared has other wives, branding him a "community husband".
"As public figures we meet all sorts of people and most just want trophies whether you are well known or not, be very careful who you allow into your life don’t go giving your heart to everyone," Lillian explained.
Adding, "Sociopaths will keep you entangled in their web of lies and you will be one of their many victims. When you actually believe someone is true to you only to find out they are community husbands you are safer stepping aside."
She warned her fans, "Nobody should ever tag me in posts about Jared Ombongi who has been associated with me I disassociate myself from such links from today. As politicians say “I would rather die” than be linked to a polygamist!"
It now turns out that back in 2005, Jared filled a case in the United States court of appeals for the eighth circuit, seeking a review of a Final Order of the Board of Immigration Appeals (BIA).
In the court papers, Ombongi painted the picture that he is a political refugee who needs asylum in the States.
"On July 25, 1994, Ombongi filed an asylum application with the Immigration and Naturalization Service (INS). In the application, Ombongi alleged that his family had been driven out of their homes by ethnic clashes in 1993. He also asserted that he was a member of the Forum for the Restoration of Democracy (FORD), an opposition party."
In his testimony, Ombongi claimed that "most of his family was in a refugee camp in Kenya and he had lost contact with them, but he believed his brother Nicholas was supporting them. Regarding Nicholas, Ombongi alleged that since he had left Kenya, his brother had been harassed, questioned by the government, and robbed."
The court did not believe his story.
It did not help that he was caught pants down, when one of his American wives accused him of bigamy.
The immigration judge in the ruling said, "Ombongi's explanation for his bigamy puts his credibility as a witness in doubt."
In 1993, Jared married Heather Mae Rice. In 1994, while still married to Rice, Ombongi married Layle Marie Kobow.
Kobow filed a visa petition on behalf of Ombongi. However, when she learned that Ombongi was still married to Rice, Kobow reported Ombongi to the INS.
In her letter to INS, Kobow alleged that "she did not have marital relations with Ombongi, that she did not know where he was, and that the marriage had been arranged by a friend with the understanding that Ombongi would help her financially."
In 1997, Ombongi and Kobow were divorced.
In 2001, Ombongi and Rice were divorced.
On November 2, 2001, Ombongi married Morris.
On September 26, 2002, Morris filed a visa pdetition on behalf of Ombongi.
Ombongi's petition was denied.
by GRACE KERONGO
Word Is
26 December 2018 - 15:00