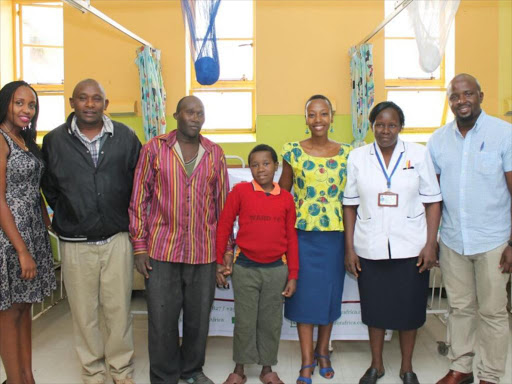 Former TV personality Janet Kanini today joined hands with local taxi hailing company, Little, to share some Valentine’s love by bailing out a cancer patient who was being held in hospital over an outstanding bill of close to a million shillings.

Janet Kanini who emerged victorious after battling with lung cancer was happy to see more and more corporate entities join in the walk to support cancer patients. “As a foundation, our dream is to see every Kenyan and every corporate entity actively join in the cause to ensure timely and successful treatment of cancer. This can be a very expensive venture and it is so refreshing to see companies like Little step in without asking for huge proposals and justifications from the needy,” she said.

Teaming up with Janet Kanini Ikua Foundation, the company’s General Manager Ronald Mahondo took to Kenyatta National Hospital to fully pay the outstanding bill and secure the discharge of master Stephen, an 11 year old boy that had been diagnosed with chronic Leukemia stage one and was undergoing treatment.

“I was told of Stephen’s plight by one of our staff members and I was moved. As a company that seeks to provide real solutions to Kenyans, we decided to team up with Janet Kanini so that we can get this young boy home with his family because they have already gone through a lot,” said Ronald.

Stephen was successfully discharged at 3.00PM after the hospital received full payment from Little.