This is why the criminal case against former MCSK boss was dismissed! 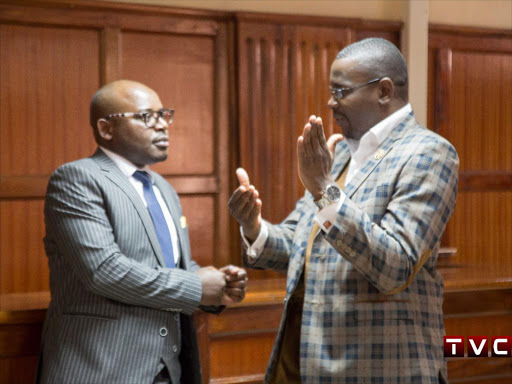 The criminal case brought against the former Music Copyright Society of Kenya CEO, Maurice Okoth and five others, has been dismissed by Judge Odunga of the High Court.

The judge "quashed" all the "criminal charges against the Applicants based on the facts contained in the Charge Sheet dated 18th November 2015 in Criminal Case No. 1904 of 2015".

This means that Maurice and the others charged in the case - Shamilla Kiptoo, James Mutisya, Music Copyright Society of Kenya, Peter Kisala and Lilian Njoki - cannot be prosecuted for the same charges, ever again.

In his ruling, Odunga cited that under section 77(5) of the Constitution it is a constitutional right that no person who has been tried by a competent court for a criminal offence and either convicted or acquitted shall again be tried for that offence or for any other criminal offence of which he could have been convicted at the trial of the offence.

"The entity which is alleged to have been defrauded, according to the charge sheet, has not only not complained but is also an applicant in these proceedings seeking or supporting the case seeking the termination of the criminal proceedings. It is therefore clear that the person or entity who the prosecution purports to protect through the criminal proceedings, does not support the prosecution’s action. In my view it would seem that the decision to charge the applicants was arrived at without proper investigations and therefore contrary to Article 157(11) of the Constitution as read with section 4 of the Office of the Director of Public Prosecution Act. According to me the said decision defeats reason."

He added, "In my view the decision to charge the Applicants with offenses allegedly committed against the Society in light of the material placed before me does not add up. Apart from that it is clear that the interested parties’ bone of contention revolves around accounts. To transform a dispute which is purely a matter of accounting into a criminal one when the perceived victim has not lodged a complaint and when the complainants themselves are not even sure of what is due to them in my view amounts to embarking on a fishing expedition and amounts to employment of criminal process for the achievement of collateral purposes."

He continued, "I also associate myself with the decision in R vs. Attorney General exp Kipngeno Arap Ngeny High Court Civil Application No. 406 of 2001 that:

“A criminal prosecution which is commenced in the absence of proper factual foundation or basis is always suspect for ulterior motive or improper purpose. Before instituting criminal proceedings, there must be in existence material evidence on which the prosecution can say with certainty that they have a prosecutable case. A prudent and cautious prosecutor must be able to demonstrate that he has a reasonable and probable cause for mounting a criminal prosecution otherwise the prosecution will be malicious and actionable”.

Ojunga said, "As was held in R. vs. The Judicial Commission into the Goldenberg Affair and 2 Others exp Saitoti HC Misc Appl. 102 of 2006: “It is not good for the DPP to argue that the Applicant should be arrested and charged so that he can raise whatever defences he has in a trial court. The Court has a constitutional duty to ensure that a flawed threatened trial is stopped in its tracks if it is likely to violate any of the applicants’ fundamental rights.”