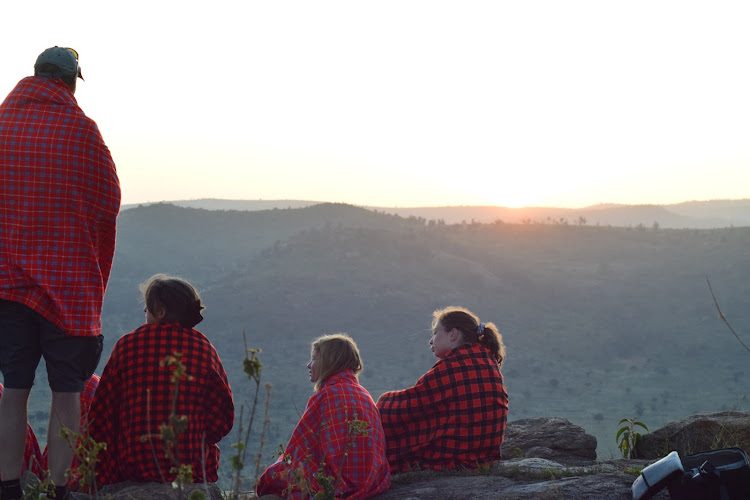 The Safari Series is, as previously mentioned, about experiences; it is about being up on the cliffs as dawn breaks, wrapped in a shuka, armed with a cup of steaming coffee, as a dramatic fireball sunrise peeps over the horizon and the temptation to lift the nearest  lion cub in the air and recreate the iconic moment in the Lion King comes to mind  (I didn’t do it though)

The Safari Series is unapologetically  simple, the rooms are practical but comfortable and as Moon Hough, the co-owner explained to me, they are designed to appeal not just to the wealthy but to offer everyone an affordable opportunity to experience the sights, smells, sounds and experiences of being in the unique Kenyan bush.

Nestled in the 50,000-acre Lolldaiga Hills conservancy, a short distance from Nanyuki, the camp is so named, both because it offers a series of experience and because of its connection with the series 1 Land Rovers, the mechanical passion of Ed Hough, Moon’s husband and the other half of the management team.

I’ve been visiting this conservancy for some years, for many years a commercial cattle ranch owned by the Wells family, they created a hybrid environment where the cattle rearing could continue but where the wildlife was welcome and safe.

Unlike other cattle farms that have morphed into conservancies, Lolldaiga has always been proud of its accessibility, open to people to come in and drive around or to walk (accompanied by an armed ranger) or to pitch camp by one of the numerous manmade dams. There are no lodges here and Safari Series is the only tented camp, sited so discreetly, that its existence would never be known unless you were looking for it.

The Safari Series is, as previously mentioned, about experiences; it is about being up on the cliffs as dawn breaks, wrapped in a shuka, armed with a cup of steaming coffee, as a dramatic fireball sunrise peeps over the horizon and the temptation to lift the nearest  lion cub in the air and recreate the iconic moment in the Lion King comes to mind  (I didn’t do it though).

It's about climbing up to see one of the only places in Kenya, where the ancient caveman drawings can be found and it is about getting out in one of the classic Land Rovers that are synonymous with the Safari Series and if you are confident enough, you may even be allowed to take the wheel! 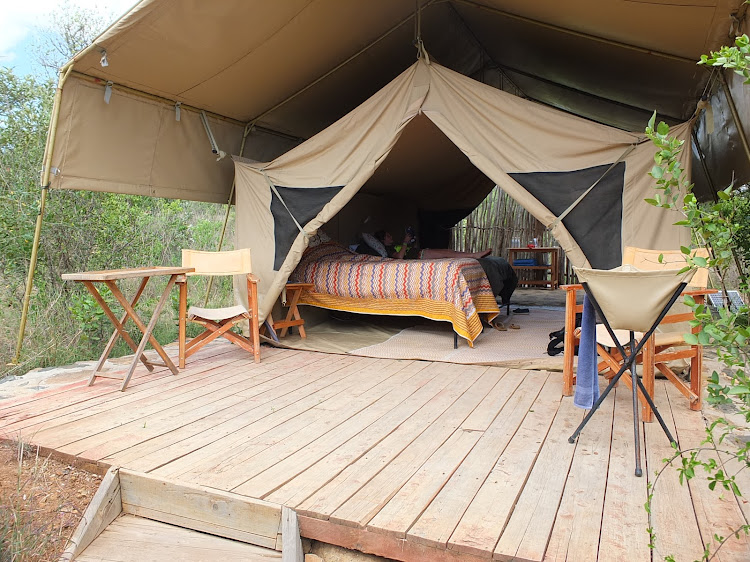 When we visited, Laikipia had been suffering from a period of prolonged drought, the rains hadn’t lived up to their potential and the dams had shrivelled into puddles. In times of plenty it's very possible to kayak or swim, it's best to take advice on which are leech free and you need not worry about crocodiles or hippos as there are none about. It gets cold here, really cold at times and the hot water bottle and blanket in the vehicle can be the difference between a fun safari and a shiver fest.

Ed and Moon feel very passionately attached to their environment and to this country, everything possible in the camp is Kenyan made, all their food is sourced locally, including the daily fruit and vegetables from the small farm which has found a remarkably innovative alternative to pesticides (I’ll let you ask them about that).

As well as the very much full-time job of running the camp and raising a two-year-old, they are reinvesting all the camp's profits in two critically important local projects. Firstly, the Timau River project which seeks to safeguard this critically important waterway from over exploitation and secondly the opuntia cactus which has infested the adjacent Makurian ranch, with devastating effect.

They are also very ecologically conscious in how they operate the camp, the footprint is extremely small, with solar power providing the limited amount of electricity required to charge camera batteries and phones.

Water being the all-important commodity is very carefully managed, with rainwater capture tanks and the use of bucket showers to conserve effectively. Plans are underway for a biogas operation, utilising food waste and their own vegetable patch provides a significant proportion of their food for the camp.

Lolldaiga Hills is going through a transition, it has been taken over by new owners that have committed to the conservation of this special place. This may bring about some gradual change in the land use, the conservancy had traditionally been utilised as a training area by the British Army but with the objective of returning it to being a Big Five haven, there is likely to be some increase in commercial tourism facilities.

The Safari Series is a fun dynamic camp run by fun enthusiastic and dedicated people who are driven and motivated to make their dream a reality. That shows through in every facet and is reflected in the staff and in particular the guides who were engaging and knowledgeable, clearly very passionate about not just the safari cliché but in the small detail that make the experience one that remains in the memory.

The icing on the cake, the twilight leopard out looking for a juicy impala for supper who regarded us with disdain before slinking back into the undergrowth.

As we were departing a group were arriving to spend a few days fly camping under the stars and walking through the conservancy. It sounded like some serious fun, one to plan for next time!

Secrets of Shompole Wilderness in Kajiado