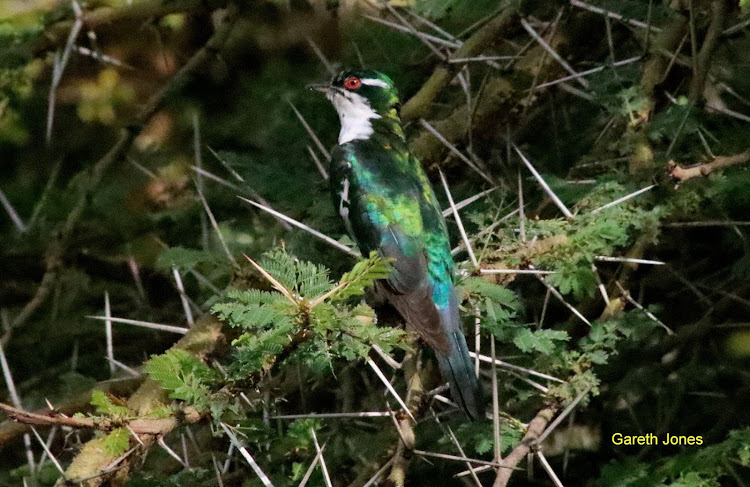 Early one weekend morning we arrived at the Athi dam to relax quietly. Then after sitting for a while drove towards the dam wall, when suddenly I saw a flutter of movement on my left. Then as it turned with the sun shining on it a Diederik cuckoo looked beautiful as glossy shades of emerald green glistened on its shiny feathers.

They are more often heard than seen, their call is unmistakable, a loud deed-deed-deed-deed-er-ick call from which it gets its name. They mostly feed on caterpillars, but they also feed on various types of insects.

The diederik cuckoo (Chrysococcyx caprius), is a member of the cuckoo order of birds. The generic name Chrysococcyx combines the Ancient Greek khrusos meaning "gold" and kokkux meaning "cuckoo". Found in the Nairobi National Park, and in certain locations within sub-Saharan Africa. They are short-distance seasonal migrants, moving with the rains. Found in open woodland, savanna and riverside bushes.

These beautiful birds have a particularly cunning method of ensuring their species has a future. The diederik cuckoo is a brood parasite, by laying single egg mostly in the nests of weavers. Simply speaking they invade the nests of other unsuspecting birds by laying an egg in their nest when they are not there.

The cuckoo also removes the eggs that the host bird has laid. Sometimes the unsuspecting host bird doesn’t detect any foul play and continues to sit on the egg until it hatches. Female parasitic cuckoos sometimes specialise and lay eggs that closely resemble or almost mimic the eggs of their chosen host. In nests where the young of the host birds survive hatching, the cuckoo chick is known to push them out of the nest.

God has created so such amazing diversity. Next time you are in the park, listen carefully for the unmistakable sound of “deed-deed-deed-deed-er-ick”, and then if you look around you might be rewarded with an interesting cuckoo sighting.