They are particularly designed for efficient and effective hunting

• A serval is a medium-sized African wild cat 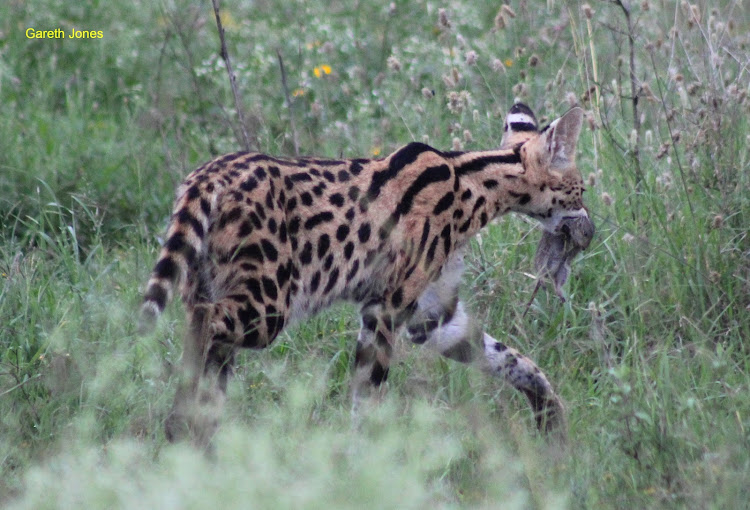 When driving in the Nairobi National Park, always be prepared for those “suddenly” moments when you see something rare or special. A few years ago, I saw a serval then immediately stopped and switched off the engine.

As I watched its large radar-like ears tilted forwards. Then as if in slow motion, its long-legged beautiful sleek body crouched, ready to pounce. After a few moments, the serval sprang into action, launching its body high above the tall grass, diving straight into a small shrub. Then emerged victoriously carrying a large rodent in its mouth, and proceeding to walk confidently away into a thick patch of bush to eat dinner in peace.

The serval (Leptailurus serval) is a medium-sized African wild cat. Servals have the longest legs of any cat, relative to their body size. However, a very special distinctive feature of the serval as a species is the presence of large almost radar-like ears and auditory bullae in the skull, indicating a particularly acute super-sensitive hearing. They are designed to pick up the sound of small prey animals hidden in the undergrowth.

To see a serval cat anywhere is very special, and the Nairobi National Park is a good place to find them. They are not common and are difficult to see due to their markings, some people could mistake them for miniature cheetahs, but they are much smaller than cheetahs. They also have a shy reserved nature, and as a result, their habits are often sneaky and secretive.

Servals are indeed an incredible creation, particularly designed for efficient and effective hunting in a unique way unlike any other cats. Drive slowly and be on the lookout for birds like guineafowl that seem to be alarmed, or small antelope that are all standing still looking in a particular direction. While there is no guarantee of seeing a serval, such sightings are always very special rare moments.

Post a comment
WATCH: The latest videos from the Star
by Gareth Jones Nature Writer
Travel
11 March 2022 - 03:00
Read The E-Paper