My weekend getaway to Diani

It was four days and three nights of incredible experiences

• From dancing with Giriamas to eating biryani to swimming with dolphins, it was wow 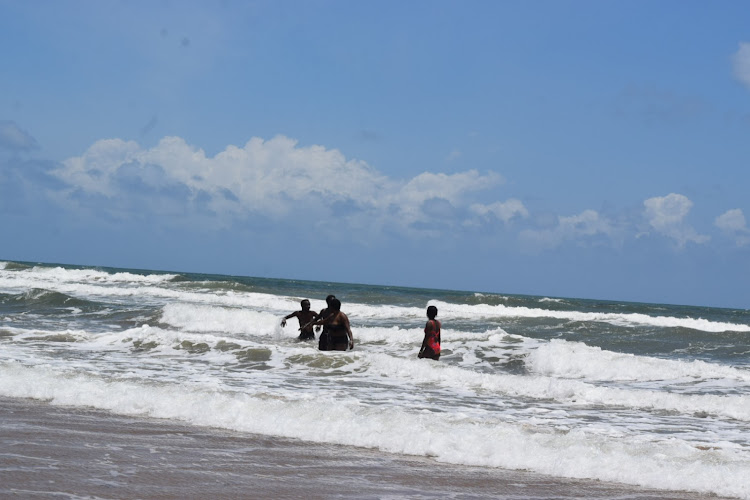 Travelling is one of my hobbies, but travelling to the South Coast has always been on my bucket list.

Last weekend, I got the opportunity to travel to Diani for four days and three nights, Thursday to Sunday.

Ukunda Airstrip came through since I took a flight, Jambojet to Ukunda, and then travelled by van from the Airstrip to Baobab Beach Resort.

From Jomo Kenyatta International Airport to Ukunda Airstrip was a 55min flight.

Baobab is a three-in-one hotel: Maridadi, Kolekole and the main hotel. It is located on Diani Beach and overlooks Indian Ocean.

On arrival, I went for dinner at the main restaurant, themed blue with a touch of gold. 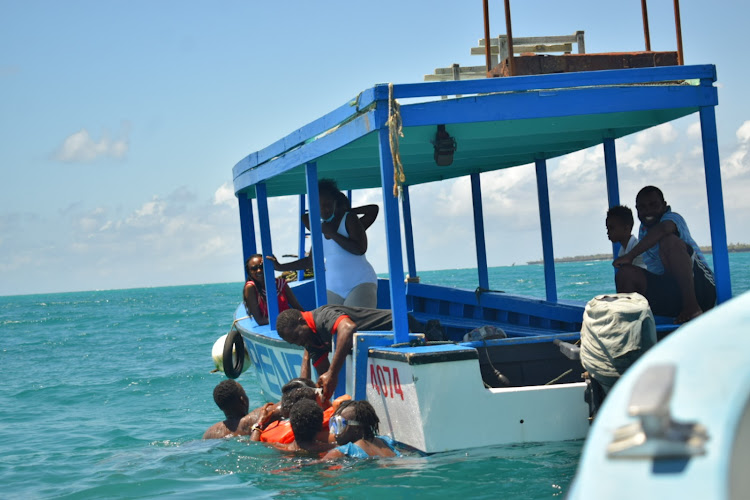 Tourists are helped out of the water while others look on. They were in a boat swimming with dolphins at Wasini
Image: CHARLENE MALWA

Day two, on Friday, we left for Diani Bikes. A few of my friends chose to ride the bikes to the destination.

We were heading to Mijikenda village to experience the Giriama dances, their culture and to interact with them generally.

At Maweni village, I met Daktari Musa, a traditional doctor who treats fellow residents by use of herbs and ‘belief’.

One of Daktari’s wives prepared a sumptuous meal of ugali and coconut cream sauce.

We then left for Coast dishes to have lunch. The meal ordered was chicken biryani; I mean, how was I going to come all the way to the Coast and fail to eat locally prepared chicken biryani?

After this, the next stop was Kongo River for a sundowner, so calming and therapeutic for a Friday evening.

Back to my residence and there was a scheduled movie at the Porini Amphitheatre, accompanied by performances, disco and dance. 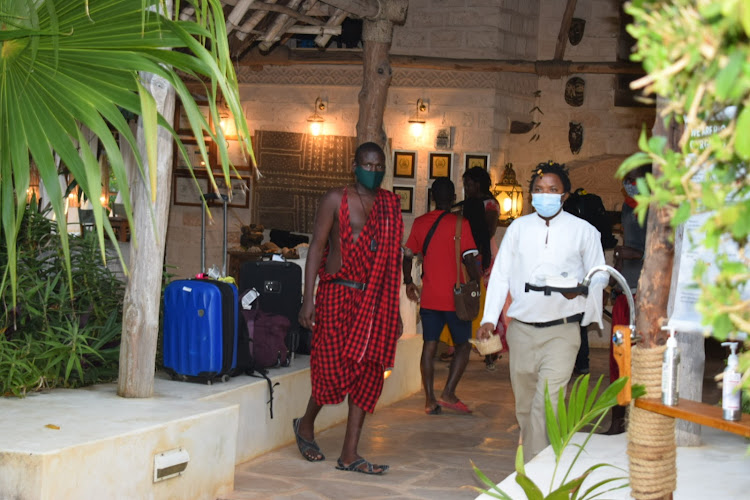 A Maasai resident and a waiter walk past as tourists check in to the resort
Image: CHARLENE MALWA

I went to Shimba Hills for a game drive. I was literally standing at the highest viewpoint at the park: Pengo Hill, which is 450m above sea level.

Then now it was time for the exercise, the walk to Sheldrick waterfalls and back.

Going down was fun because we were descending the slope. Coming up was terrifying but quite an interesting experience.

The 82-feet waterfall forms a plunge pool at the bottom. It took us almost 45 minutes to the bottom of the waterfall and another hour to ascend back to the top.

Day three was the last day of fun-filled activities at the South Coast.

By 8am, we were at Wasini, Kisite Mpunguti National Reserve, to see and swim with dolphins.

It was an 8km ride on boat from the floating jetty to the Wasini beach.

After an hour or so of anxiously waiting for dolphins, they finally appeared, around eight of them, swimming in pairs.

The day ended as we had lunch at the Wasini restaurant. Fresh fish stew, rice, coconut sauce, crabs and a glass of cocktail ‘Wasini special’.

I left Ukunda at 8.25 in the evening by Jambojet Airlines, back to Nairobi via JKIA.