• From here, it is so relaxing to just gaze as life happens in the surrounding bush 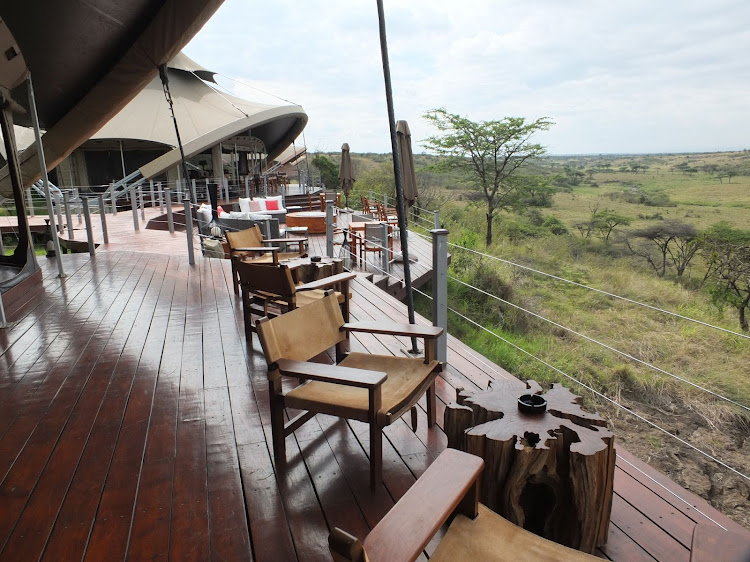 After many years of visiting unique lodges and camps in the Mara ecosystem, I feel I can be rather difficult to impress, but Mahali Mzuri sure managed it. Everything about this place came with a massive dose of wow factor. One of only five lodges in the 35,000 acre Olare Motorogi conservancy, this property is the only Kenyan member of the Virgin Limited Edition global collection owned by Sir Richard Branson.

Everything about the lodge says attention to details, from the location, which overlooks a valley intersected by a river and various water holes to the design with six rooms on each side of the central mess and bar. When I say room, that doesn’t do it justice; it's bigger than some people's apartments and oozes luxury and refinement.

It has a freestanding bath tub in which one can wallow while watching the wildlife in the valley, while sipping from a glass of champagne, which is waiting in the complimentary minibar,. You can doze off on the remarkably comfortable four poster bed, warmed by the hot water bottle thoughtfully placed by staff, as the lions in the valley below remind each other, and us, who is the king of the savannah.

Now it would be perfectly viable and really rather nice to spend the whole day at the lodge. Over breakfast, I saw a hippo, lion and crocodile in the valley ahead and a couple of elephants on the horizon. Down a short flight of steps is the crystal clear infinity pool, once again with a well-stocked mini bar and even a selection of sun cream so you don’t need to walk back to the room for anything.

From here, it is so relaxing to just gaze as life happens in the surrounding bush. Further down the steps is the beauty treatment room, where a variety of services are on offer, including with the super popular Africology range.

We were lucky enough to see some remarkable sightings, including a leopard up a tree with a kill, no less than eight cheetahs, three of which were being trained to hunt by their mother, much to the detriment of the poor Thomson’s gazelle who was their training aid, and a big wildebeest crossing culminating in an hour-long life-or-death battle between one hapless creature and an enormous crocodile.

Rekindling the love of Old Africa

Back at camp, the service was beyond measure. Johnstone, who led the front of house for food and beverage, loved to create exciting virgin cocktails for the younger member of our party, and ensured our glasses were never left bereft. Being a sister property to the Mont Rochelle wine farm in South Africa, we were treated to some of their wonderful offerings. That aside, there was a very well stocked bar containing all sorts of fine beer, wine and spirits, as well as soft drinks, of course.

Eddie the chef pulls the strings in the kitchen and each meal, including breakfast, is chosen from a one-off menu, with at least two options plus an additional vegetarian dish available. They made clear that if there is not something on the menu that will tantalise the taste buds, then they would devise something that will. After each meal, hee personally came to see us and make sure everything was up to scratch. Being allergic to gluten, he was able to whisk up some remarkable gluten-free bread that would pass for the real thing.

I personally need at least two cups of coffee in the morning to get the grey matter working properly, and I was chuffed to bits that Johnstone had no difficulties in preparing a lip-smacking cappuccino that I could take out on the drive. That is how to make a happy camper for sure!

Its hard to find enough superlatives to fully do this remarkable place justice. Due to the effects of Covid-19 on international tourism, there has never been a better time for Kenyan residents to stay here with their current offer and enjoy all it has to offer! I can’t recommend it highly enough.