There were mixed feelings about 'Arab' Morocco and 'African' France 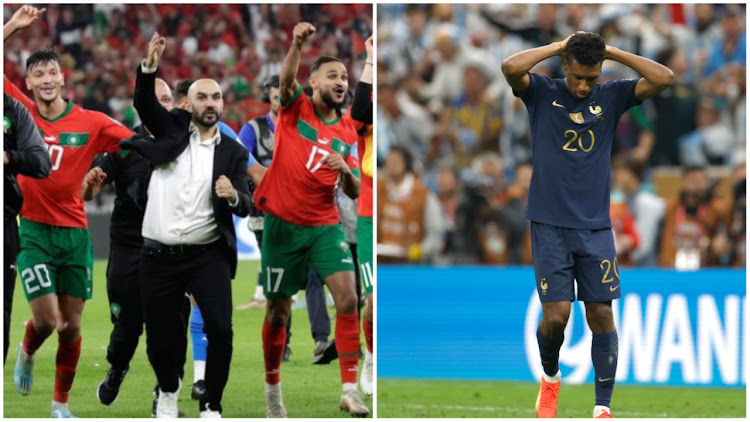 Morocco had a significant victory in this year’s World Cup by going up until the semi finals. They had the whole African continent and the Arab nations rallying behind them. Their win against Portugal was particularly remarkable.

Africans were excited to still be in the game, so they shared their appreciation of Morocco taking it to the end on behalf of all African countries. Lo and behold! Some people (especially) of Arab descent, unleashed their annoyance on Morocco being called an African team.

We all know that there are deep-rooted issues within the African continent in regards to race, ethnicity and cultures. North Africa, especially because of its similarities in ethnicity and language with their neighbours to the North, have always regarded themselves as part of the Arab world. However, geographically, they remain part of the 54 countries that make up the African continent.

For whatever reason, we have always known that most Northern African countries hate being referred to as Africans. Perhaps their perception of Africanness is a skewed one, rooted in racism and genealogical superiority. Whatever the case, Northern African countries are still much a part of the African continent, and unless they find a way of uprooting their land from Africa and transplanting it to the Middle East, they will remain as much a part of the African Union as they are members of the Arab League. Case closed.

However, let’s talk about the ethnicity of players in national football teams. As we are all aware, there are some pretty good athletes that came out of the motherland. These athletes are then offered citizenships to other countries to bring prestige to those countries. Some are born out of immigrant parents and attain citizenship at a young age.

Physically, we can tell that these players or athletes are not of European descent, so why is it wrong to refer to their wins as the wins of their country of origin as well as that of their adopted countries? This was the case of Trevor Noah during the 2018 FIFA World Cup. He got into a debate with the French for stating that the World Cup win for France is also a win for Africa.

It is quite clear just from looking at the French team that most players are of African descent. They play for France, sure, which means their nationality is French, a fact we can't argue about. However they are physically not French natives, neither are their names or cultural practices. I'm certain most of the African athletes who have become citizens of Western countries still speak in their mother tongues and enjoy their ethnic foods more than the continental food that is readily available in the West.

At the extra time playoff of the World Cup finals this year, my husband pointed out that there was hardly a Caucasian player left on the French team. Most of France's players are African in every way, shape and form, except nationality. It is not wrong for someone to point it out, and neither is it wrong for Africans to take sides with a team that has more African players.

We all know that these players face a lot of racism and second-class treatment in their adopted countries for being 'immigrants'. Yet Africans cannot celebrate with them in their victories because they don't play for any African country.

This hypocrisy from the West needs to stop. They still take the best out of Africa and claim it as their own, whether it be natural resources, minerals or athletes. They can take the man out of Africa but they can't take the African out of the man!

Post a comment
WATCH: The latest videos from the Star
by Nabila Hatimy Entertainment Writer
Lifestyle
07 January 2023 - 06:00
Read The E-Paper