Why Kilifi community is building ‘houses’ for fish 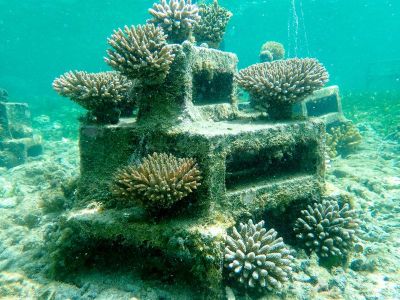 Which comes first, fish or their homes? For some fishers on the shores of the Indian Ocean, building coral reef homes for fish is a top priority.

“Coral reefs are like a house for fish,” says Katana Ngala, a fisher turned coral reef restorer from Kuruwitu, on the shores of the Indian Ocean in Kilifi.

“The moment they are destroyed, they cannot breed as effectively and neither will they be comfortable.”

Ngala has been involved in coral reef restoration since 2019. Besides leading the community initiative, he doubles up as a coral technician for Oceans Alive Trust, a local organisation protecting marine life on the Kenyan coast.

Climate change has affected the ocean ecosystem, especially rising ocean temperatures. High temperatures bleach tiny algae cells on corals and deactivate their growth. Since most fish find shelter, food, reproduce and rear their young in the nooks formed by corals, the loss of corals leads to a decline in fish.

A seasoned fisher since he was 16, Ngala has witnessed a significant drop in fish quantity.

“Back then, there were lots of fish, but over time, especially in 2003, there was a sharp decline. The fishing gears used by our grandparents were made to trap mature fish, unlike those that most fishers use today,” he says.

Knowing their livelihood was at stake, he mobilised fishers from neighbouring fishing landing sites, including Bureni, Vipingo, Kinuni, Kuruwitu, Kijangwan and Mwanamia. Together, they created Kuruwitu Conservation and Welfare Association.

The community initiative has been the fishers’ vehicle for propagating their interests, while ensuring they conserve fish through coral restoration.

“Our immediate goal was to stop aquarium dealers who would trap ornamental fish and sell them at high prices without benefitting us. We also wanted to adjust our fishing gears to allow immature fish to grow and restore fish quantity,” he says.

The group constructs brick structures that immerse into the identified coral restoration site before they line up artificial corals on a plug plate spread on the bricks.

Fish are then attracted to the plugs, which grow corals over time, and use them as breeding grounds and resting spaces. They occasionally visit the sites to brush off algae that could hinder coral growth.

“When there are coral algae that can stop the coral reefs from growing on the plug, you have to scratch it using a knife,” Ngala says.

Already, the group is witnessing a positive outcome from their coral restoration activities at the ocean shores.

“Fish has increased because they can now breed better,” he says.

The initiative has attracted different groups that seek to benchmark and learn coral restoration practices.

Human activities that exacerbate climate change and its resultant effects should be limited, he says. He remains committed to the call to improve marine ecosystems.

“It has taken me a lot to restore corals. All of us should take care of the marine biodiversity so that the next generation can enjoy it also,” he says.

Post a comment
WATCH: The latest videos from the Star
by bird story agency staff
Lifestyle
11 November 2022 - 04:00
Read The E-Paper