The sympathetic nerve causes blood vessel contraction in the hands and/or feet, leaving the extremities cold and sweaty.

•About 5 per cent of people worldwide, 367 million people, deal with issues related to extreme sweating.

•It does not matter whether the temperature is comfortable or you are not active, your hands may sweat profusely 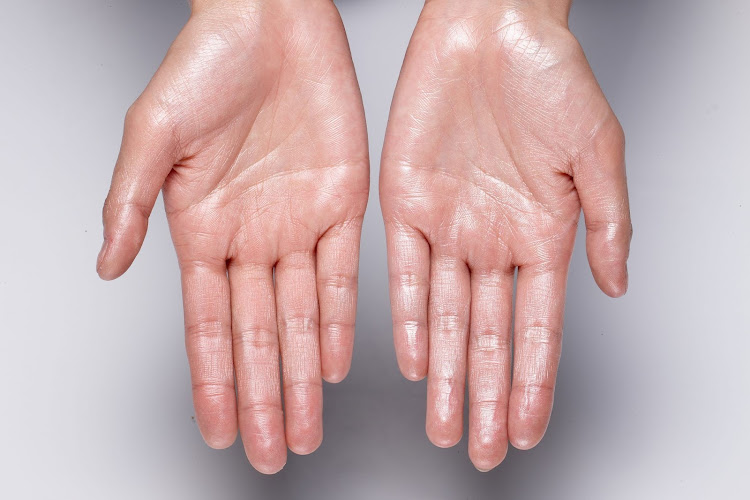 Beyond just embarrassing, "sweaty palms" syndrome is often a debilitating disorder that can affect one's work and life.

According to the International Hyperhidrosis Society (IHS), about 5 per cent of people worldwide, 367 million people, deal with issues related to extreme sweating.

Some people may shrug off mild hand sweating as a minor concern.

Although this condition does not always indicate a serious problem and may run in families, excessive sweating is sometimes a symptom of an underlying condition, such as diabetes, menopause/hot flashes, low blood sugar, overactive thyroid, heart attack, nervous system problems, and infections.

It does not matter whether the temperature is comfortable or you are not active, your hands may sweat profusely.

This response has nothing to do with indoor or outdoor temperature or your level of physical activity, but the researchers show strong evidence that sweaty palms syndrome is genetic.

The new UCLA study was published in the Journal of Vascular Surgery.

Hyperhidrosis is caused by the sympathetic nerve, which governs the nervous system's "fight or flight" response.

The sympathetic nerve causes blood vessel contraction in the hands and/or feet, leaving the extremities cold and sweaty.

In people with hyperhidrosis, perspiration is often excessive and continuous.

The researchers suggested it may be caused by a dominant gene indicating that family members of those who have the disorder may suffer from it more than has been previously reported.

"Traditionally, this syndrome was thought of as stress-related and has not been taken seriously by the medical community," Samuel S. Ahn, lead author of the Study said.

"This is one of the first studies helping to support that 'sweaty palms' is a real physiological disorder that can be passed from generation to generation."

According to Ahn, although the disorder appears to be inherited dominantly, the possible genes involved may not always cause hyperhidrosis.

"Hyperhidrosis can truly affect one's life and career, such as a police officer dropping a gun and having a suspect slip away, or a fireman not being able to pull a hose or a banker unable to handle money due to severely sweating palms," Ahn said.

If one parent has the disorder, the study found that children have a 28 per cent risk of also having hyperhidrosis, whereas the risk would be 50 per cent of the gene that produces the disorder directly.

This indicates that other genes may also be necessary for hyperhidrosis to develop.

If a child has the disorder, 14 per cent of parents have it too.

"The strong inheritance pattern and a large number of people with family recurrence of the disorder indicate that hyperhidrosis may be caused by a dominant gene," Ahn said.

He added that the disorder does not appear to be related to sex or ethnicity.

The good news about hyperhidrosis is that doctors have several different options for treating it.

You could always go see a dermatologist for a talk about extreme measures and talk about what's happening.

Treatment for hyperhidrosis of the hands now includes a minimally invasive surgery procedure, where a surgeon will snip the sympathetic nerve connected to the hands.

The surgery simply stops the ability of the nerve to create hyperhidrosis.

What next after the study

The next step, according to Ahn, is to test the DNA of people with hyperhidrosis and begin the process of trying to identify genes that cause the problem.

Ahn's interest in pursuing this study began when a former patient of his told him that her six-week-old infant also had hyperhidrosis.

Ahn then realized the possibility that hyperhidrosis may be inherited and not environmentally related to stress.

Some are using drugs as a mechanism to cope with stress, among many other reasons.
Opinion
1 month ago

Snack time should be an opportunity to get extra nutrients in your child’s tummy.
Sasa
1 month ago

Breast Cancer: Why women over 30 years should consider screening

A mammogram is an x-ray picture of the breast that doctors use to look for signs of breast cancer.
Sasa
1 month ago
Post a comment
WATCH: The latest videos from the Star
by MARGARET WANJIRU Health & Lifestyle Journalist
Lifestyle
24 October 2022 - 20:56
Read The E-Paper