Are the benefits owed to retired President excessive?

Critics say they saddle the taxpayer with quite a heavy burden 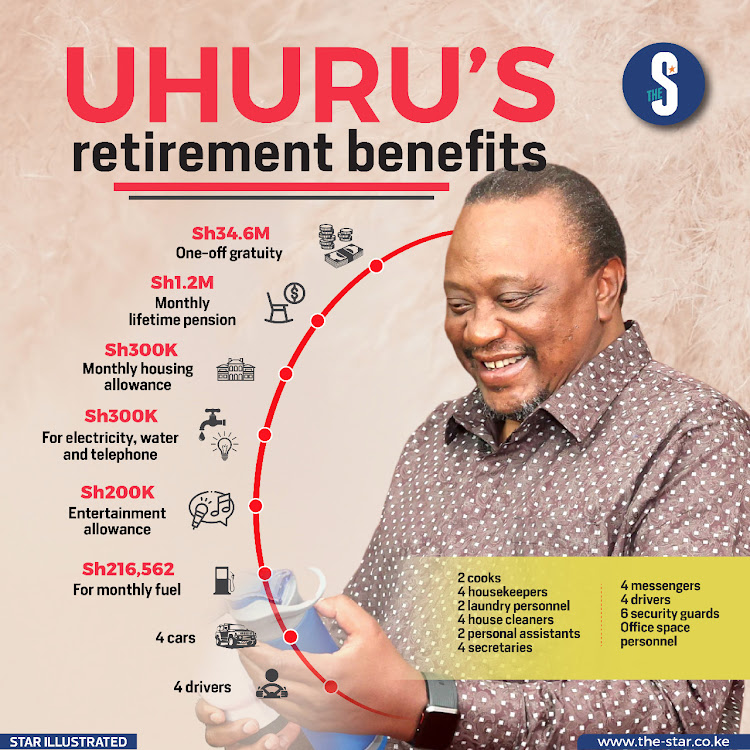 Salaries paid to Kenyan legislators have always been a thorny issue. Despite the lawmakers being amongst the highest paid in the world (and from a country with a much-lower GDP), time and again, we see them passing bills to allow themselves hefty allowances.

The 2010 Constitution established the Salaries and Remuneration Commission (SRC), which has a role to set and review the benefits of all State Officers.

Despite this, the clamour for higher salaries has still been there. In 2017, Kiambu Woman Representative Gathoni Wamucomba came under sharp criticism when she said legislators ought to be paid higher salaries to be ‘honoured’.

Presidents equally receive huge incomes and upon retirement, they receive certain privileges for life. The privileges are enshrined in the Presidential Benefits Act.

First, they receive a lump sum payment on retirement, calculated as a sum equal to one year’s salary for each term served as President. Subsequently, they are paid a monthly pension equal to 80 per cent of the monthly salary paid to the serving President.

Their electricity, water and telephone bills among others, are paid by an allowance equal to 23 per cent of the monthly salary of the serving President.

The retired president is entitled to suitable office space, not exceeding 1, 000 square metres, with appropriate furniture, furnishings, office machines, equipment and office supplies, to be provided and maintained by the government.

In terms of health care, a retired President receives full medical and hospital cover, providing for local and overseas treatment, with a reputable insurance company for both the retired President and their spouse and any children under the age of eighteen years.

Besides this, they also get personal assistants, secretaries, messengers, drivers, cooks, gardeners, laundry persons and office maintenance. The retired President and their spouse have a diplomatic passport and an international travel allowance for up to four trips a year, each being not more than two weeks.

These benefits, however, may be denied where a President exits office due to violation of the Constitution or gross misconduct, if they are convicted to an imprisonment of three years or more, or if they are actively engaged in the activities of a political party.

A lot of queries have been raised regarding the viability of these payments and whether they are even necessary primarily because they saddle the taxpayer with quite a heavy burden. I am a firm believer that the people are sovereign and can challenge any law(s) they think are unfair or unreasonable. If the citizens think so, then they have every right to challenge this Act. However, as things currently stand, this is what the law says.

Why I will hand over power smiling - Uhuru
Post a comment
WATCH: The latest videos from the Star
by Neil Samuel @neilsamuel271
Lifestyle
29 September 2022 - 05:00
Read The E-Paper