Imagine the impact if elected politicians pledged 50 per cent of their salaries to relief efforts?

• By all means, preach etiquette to state officials, but get your priorities right 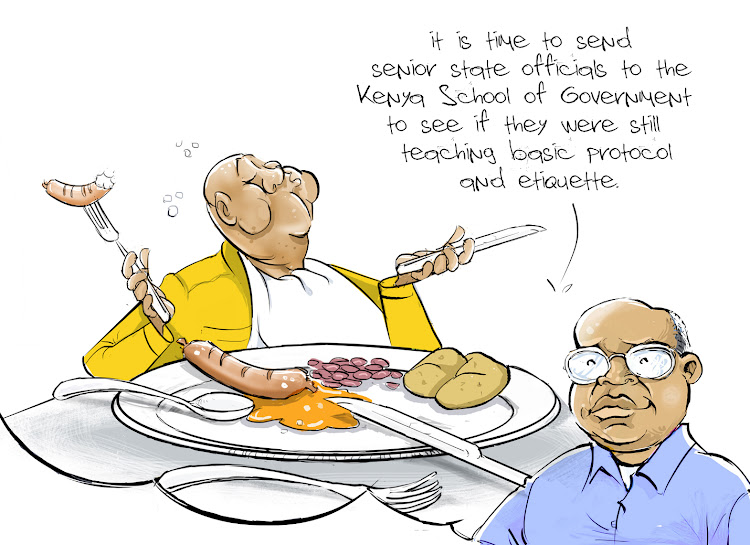 I know he probably doesn’t like the comparison, but I can’t help the fact that there are times that President William Ruto reminds me of his predecessor, President Daniel arap Moi.

Moi, who was a very publicly devout Christian like our new President and a strict disciplinarian, again like our new head of state, was also the founder of one of the dynasties that Ruto has vowed to annihilate.

Moi, who took office at about the same age as Ruto, liked to be in control of even the minutest detail as it seems does Ruto, who has recently ordered his officials to go for table manners training.

Actually, I was quite amused about the etiquette training order as it came a day after I had been sent a TikTok video clip purporting to be of the new Deputy President scoffing his food in a quite undignified manner, while at what seemed like a public function.

I must admit when I saw the video, my first thought was that it was some sort of deep fake aimed at blackening the DP’s image, but after the President spoke, it would seem the video was genuine.

When I got the video, I joked that perhaps it was time to send senior state officials to the Kenya School of Government to see if they were still teaching basic protocol and etiquette.

You can imagine my surprise, and that of my friend, for the matter, when the very next day, the President spoke about this very matter.

Had I been someone whose communications were worth hacking into, I would have sworn that my phone conversations had been hacked and feedback was being sent back to the state. By the way if this is the case, could the state start paying me a consultancy fee?

The whole thing reminded me of a column I wrote for these very pages a few years ago, about people from my parent’s generation who would now be in their 80s.

Back in the late 1950s and early 1960s in the run-up to self-government, a number of Kenyans were considered privileged enough to get Kenya government scholarships to Britain and her dominions, such as New Zealand, Australia and Canada.

However, before they embarked on their studies abroad, a foundation course at Jeanes School Kabete, later the Kenya Institute of Administration and now the Kenya School of Government, was de rigueur.

On this foundation course, they would receive lessons to help them acclimatise to social and cultural conditions in Britain and other countries. This included teaching on dining table etiquette.

I said in that article that if you had access to people from that generation, you should see how they handle cutlery and compare it to their non-Jeanes peers.

These are the sort of people who would not be caught dead using the wrong cutlery at dinner, or drinking tea from a mug when there was a perfectly reasonable cup and saucer available.

That said, if the state is going to send government officials, MPs and the like on such courses, they should come up with a way of deducting the costs of tuition from the outrageously inflated salaries these people earn and not from Treasury, especially in the light of the dire state of public finances.

On  a rather more serious note, I believe the National Drought Management Authority (NDMA) has warned that the populations of 23 counties in Kenya’s coastal and northeastern regions will be in “urgent need” of food aid over the next six months.

I would like to suggest that members of the new government would win so much goodwill if they all pledged 50 per cent of their salaries towards the relief efforts for starving Kenyans over the next six months.

And here I mean elected MCAs, MPs, senators, governors from the ruling coalition and the opposition, such as it remains, the DP and the President himself.

Of course, they will never do it, but imagine the impact if they did and all of the money went to feeding the hungry?

Post a comment
WATCH: The latest videos from the Star
by Mwangi Githahu Columnist
Lifestyle
25 September 2022 - 05:00
Read The E-Paper