The women of Wasini coax life back into the mangrove forests

Efforts to reclaim heritage, protect their island from mangrove logging are paying off

• The women-led initiative  is having an outsized impact 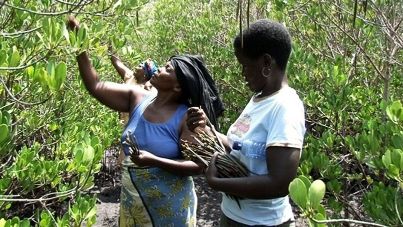 For the first-time visitor to Wasini Island, the dark-green, leafy canopy formed by mangrove trees is striking.

This was not the case a few years ago. The mangrove canopy was virtually non-existent, after being depleted through illegal logging.

Leila Mohammed, a tour guide on the small island, said the destruction of the mangrove forest almost “killed the island”.

“The island was left bare, there was no fish in the waters, corals began bleaching and dying and tourists stopped coming,” she said.

The current mangrove forest canopy on the island is about 1,236 acres.

In 2018, alarmed by the wanton destruction of the natural environment - and their livelihoods with it - island women came together to form the Wasini Women’s Group and launched a counter-offensive - replanting the mangroves to restore the rapidly diminishing forest.

The project was developed with two focal areas: rehabilitating sections of the mangrove forest that had been destroyed and conserving and protecting the replanted sections.

The chairperson of the group, 42-year-old Swabrah Mohamed Ahmed, said the women had decided to own the forest restoration and conservation initiative because they were the ones bearing the brunt of its destruction.

“The logging of mangroves directly affected the breeding of marine life and hence our lives as a fisher community were hit because fish stocks in the ocean went on a rapid decline,” she said.

“It also left the corals exposed and this contributed to the bleaching. Tourists stopped coming because of the destruction and this affected women and families in a big way.”

Initially, a rapacious onslaught on the mangroves by loggers for building material and cooking fuel, had not hit the community.

Logging of the mangroves was regarded just like any other economic activity. Local villagers had harvested it for generations for domestic use – but had always allowed it to regenerate naturally.

Increasing demand for building and farming space in the area piled pressure on the forest and there was little awareness of its importance to the area’s diversity.

“There was nobody to watch over the mangroves and the community had little knowledge of the importance of the forest,” said Mohamed Jilo, a boat operator on the island.

Halima Gure, another member of the women’s group defending their natural heritage, said replanting mangroves and restoring the forest had stemmed coral bleaching that had also affected the breeding of marine life

“With the knowledge, we gained from KFS, CDA, Nema and Kemfri training, we knew that reclaiming the forest was a solution to the many environmental and climate change problems the island was facing,” she said.

The women of Wasini began by setting up mangrove tree nurseries and mapping out destroyed sections of the forest.

Tree nurseries are managed by the community after receiving training from KFS.

After mapping, the women split into smaller groups with each group being allocated a section of the forest to restore by planting out the tree seedlings.

The groups now ensure that all new mangrove seedlings planted in their sections grow to maturity.

Swabrah said that so far, they had been able to plant an estimated 200,000 mangrove seedlings, with a survival rate of 95 per cent.

Like socio-economic activities globally, the project was slowed by the Covid-19 pandemic in 2020 and 2021. However, like elsewhere, the hiatus gave the island’s natural environment room to recover.

Among the women are trained forest scouts who are tasked with keeping watch over the forest to keep off illegal loggers.

And with the mangrove forest regaining its glory, tourists are also back on the island and the community is reaping the benefits.

Rahma Salim, another of the women in the project said the rehabilitated mangrove forest had now a big tourist attraction on the island and an income-generating source for them.

“Those visiting the mangroves pay some fee which goes to the women group. This is a source of income for us,” she noted.

A 500-metre-long boardwalk now leads into the mangrove forest and stands out as a new attraction on an island that for decades has been synonymous with fishing and tourism.

The looped wooden platform leads into the extensive and beautiful mangrove forest and allows tourists to savour the colours and diversity of the rich ecosystem on the island.

CDA managing director, Mohamed Keinan, said mangrove restoration has revitalised both the environment and social and economic standing of the island.

“Apart from the impact on marine life and biodiversity, the project has had an impact on food security and economic uplifting of the women and youth,” he said.

“With the forest back, marine life has been resuscitated and fish stocks are on the rise.”

230 women from the group are now formally employed as tour guides, forest protectors and conservationists

Villagers are becoming aware that apart from providing food, a breeding ground and shelter for marine species, mangroves also protect coastlines from erosion and storm surges – a role that had often gone unrecognised.

“Mangroves help in reducing effects of rising sea levels by elevating the coastline,” explained James Kairu, a marine scientist at Kemfri who went on to say that mangroves also help in protecting the coastline by sustaining sea life and combating climate change.

That is a role that is more and more apparent, not only on a global but also on a local level, with climate change being blamed for a spate of natural disasters across East Africa, including Somalia, where the logging of mangroves has also been rampant.

With carbon dioxide a key contributor to global warming and the growing climate crisis, the role of forests worldwide in sequestering carbon is under the spotlight.

The United Nations Environmental Protection Agency (UNEP) estimates that globally, mangrove forests sequester within their roots, trunks, and soil as much as 22.8 million tons of carbon annually.

According to Kinyanjui Koimbori, an agro-climatologist and climate change and energy researcher, mangroves can play a crucial role in sequestration.

“The unique thing about mangroves is that they can store 10 times the amount of carbon stored by other forests,’’ he said.

“The effect of mangrove carbon sequestration on Wasini Island is evident with the flourishing marine life. Without the mangroves, marine life would have been wiped out from the entire island.”

With the success story of the Wasini mangrove project, the Coastal Development Authority is also using it as a blueprint for wider mangrove restoration along the Kenyan coast and the program has been adopted on the neighbouring Pate Island.

Given the potential for sequestration and environmental rehabilitation along the East African coast, the actual impact of the Wasini Women’s Group may only be apparent many years into the future.

Post a comment
WATCH: The latest videos from the Star
by Jackson Okata for bird story agency
Lifestyle
24 September 2022 - 03:00
Read The E-Paper